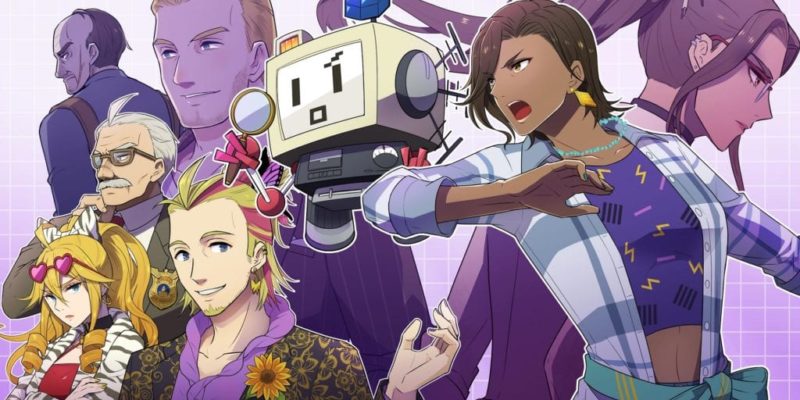 Oh, good grief. Murder By Numbers – described as a “90s-themed Hollywood detective game” – has just been announced by Mediatonic and The Irregular Corporation, and it appears to be aimed directly at me.

Murder By Numbers is a detective visual novel along the lines of Phoenix Wright. There’s evidence to find, a cast of weird characters to interrogate, and terrible crimes to solve. While the game itself has been devised by Ed Fear, that cast of weird characters has been designed by Hato Moa and the music is from Masakazu Sugimori. To put it another way: the character designs are from the creator of pigeon dating game Hatoful Boyfriend, and the music is by the man who crafted Phoenix Wright‘s instantly distinguishable earworms.

What makes Murder By Numbers more intriguing is that the primary means of puzzle-solving seems to be nonograms – which is to say, Picross. You get a grid and some numbers, and you have to use those numbers to figure out which squares on the grid need to be filled in to make a picture. I’m not much of one for basic puzzles, but nonogram variants have devoured more hours of my life than I’d care to admit.

Murder By Numbers, and also by criminals

Murder By Numbers puts players in the talented shoes of Honor Mizrahi, an actress on a TV detective show. Moments after she gets fired, her boss turns up dead, and the mighty finger of justice is pointed directly at her. With the help of a discarded robot called SCOUT, she sets out to investigate the murder and clear her name. There are multiple cases to solve, all linked together by an overarching conspiracy. So, sort of like Phoenix Wright, then.

Going by the trailer above and the screenshots below, this is exactly the sort of thing I want to play. Unfortunately, as Murder By Numbers isn’t due out until 2020, it looks like I’m going to have to wait. But, hey – if nothing else, I can at least wishlist it on Steam right now.

Indivisible – How to beat the Serpent Queen