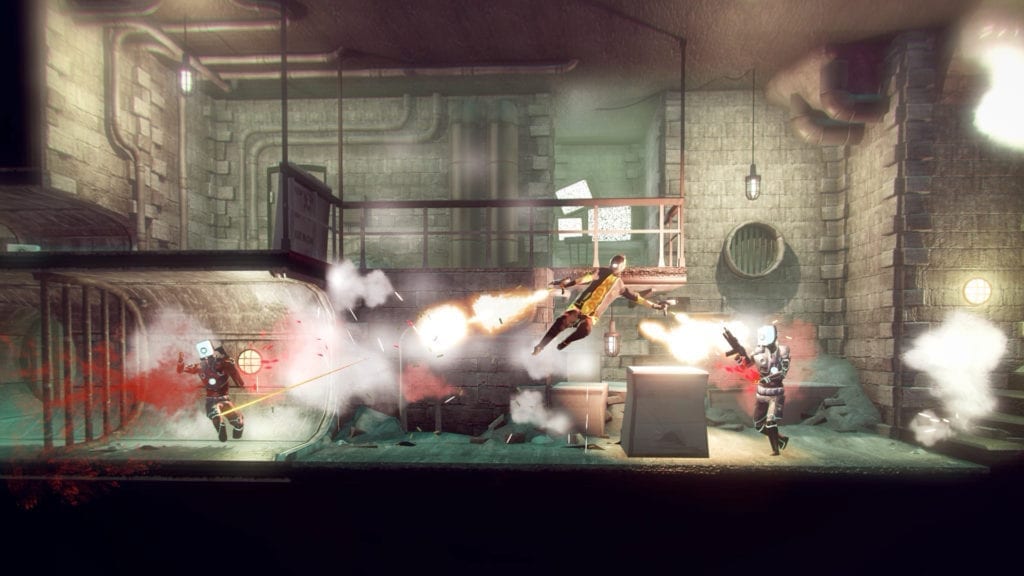 My Friend Pedro almost feels like the return of a familiar friend. I’ve been around the block long enough to pick up on gaming trends, bearing witness to popular but temporary fads — crazes, where, for a brief moment in time, gaming slammed its fist on the table and yelled “this is what I am now!” We’ve seen the coming and going of waggle controls, plus the perplexing few years where games were obsessed with beige. I didn’t care for most of them.

But one such trend I had fondness for was bullet time. Popularized by games like Max Payne and films like The Matrix, bullet time brought a fresh new take to casual shoot-em-ups. But like all fads, developers eventually tossed it into the waste bin of obscurity. My Friend Pedro, however, brushes off the aging mechanic, bringing it back into the lime light once again. Naturally, the question remains: does bullet time in My Friend Pedro feel like pulling out an old sweater that’s still warm and nostalgic, or has it become moth-worn with age? 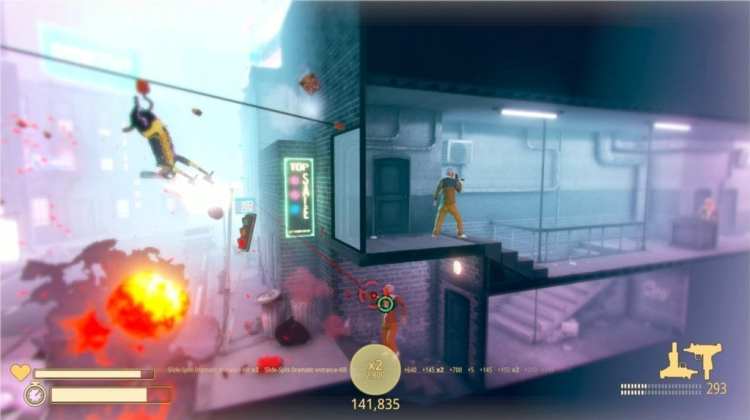 When will bad guys learn not to stand with their backs turned to windows?

Of course, My Friend Pedro doesn’t waste time pondering the value of its primary mechanic. Instead, the game places you in the blood-caked shoes of a man keen to slaughter thousands of dudes at the bidding of a talking banana, Pedro, who may or may not be all in your head. You run through a grungy, 2D world mowing down enemies with a multitude of weapons. When foes stray too close, you can send them packing with a swift kick to the teeth.

Indeed, the game is breathtakingly straightforward but rich with that special weirdness that publisher Devolver Digital loves. You can almost view it as a list of necessities at this point. A masked silent protagonist who receives constant hints about his forgotten past? We got that. A murderous symphony of blood, gore, and gunfire set to the tune of an ’80s synth soundtrack? Oh, it’s in there. Psychedelic scenes where it seems the protagonist may have gotten dunked in a vat of drugs? Check and double check.

No, My Friend Pedro doesn’t stray far from the predictable formula, but that’s not necessarily a point against it. After all, there’s no reason to change the recipe if it hasn’t gotten boring, and My Friend Pedro won’t leave you snoozing. 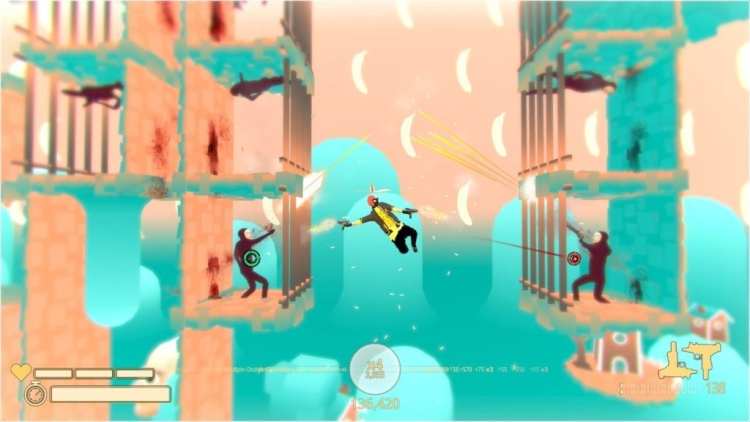 I don’t know what the hell is happening.

Talk of sentient fruit and drug trips aside, the crux of My Friend Pedro is its bullet time mechanic. It’s called “focus” in the game, and it’s represented by a bar on your HUD. As you enter focus, the world slows to a crawl, allowing you to quickly take out enemies accurately in a synth-fueled concert of gun fire, explosions, and red mist. The focus bar regenerates with every kill, or slowly refills once you return to normal time. You can dodge enemy fire by holding down a button, causing you to twirl on the ground or through the air as bullets meekly whiz by.

In other words, bullet time in My Friend Pedro hasn’t changed much since the days of Max Payne. But so what? It’s still just as entertaining as ever. There was a reason why the mechanic rose to popularity so quickly. Being able to leap through a window and mow down hapless enemies like a slow-motion god of destruction felt so damn good, and it still does. 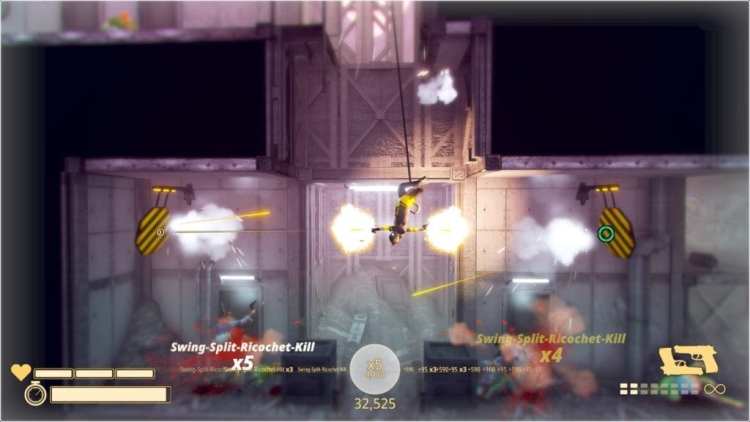 Let them reflect on this for a while.

However, if the game leaned only on bullet time, that enjoyment would probably fizzle out. It wouldn’t take long before the feeling of “been there, done that” sank in. Luckily, My Friend Pedro throws a lot of ideas into the mix. In the game, you can knock over tables for cover, slide down zip lines, wall jump, roll around like Samus, and occasionally ride a skate board that you can heel kick into people’s domes.

The game staves off repetition by constantly offering tools, tricks, and environmental challenges. Reflective panels appear later, allowing you to redirect bullets into enemies from a distance. At times you’ll also run across a frying pan that you can kick skyward, and shooting makes it comically bounce in the air as it reflects bullets at your foes. There are also barrels to ride and gas canisters you can blow up in mid-air, and you can even kick the severed heads of enemies into their comrades. Later, the game tests your platforming and wall-jumping skills by laying a series of electrified traps.

You start off with a pistol but soon move to more weapons. It won’t take long before your arsenal fills up with SMGs, a shotgun, an assault rifle with a grenade launcher attachment, and a sniper rifle. 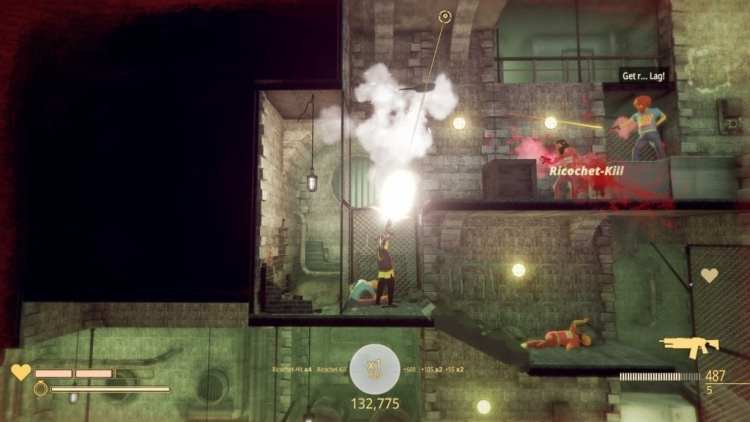 A world of hurt

That impetus extends to the game’s environments and enemies as well. Each section is vastly different from one another. You run and gun through back-alley streets, office buildings, a moving train, and high-tech complexes. Every area houses adversaries that change in difficulty and, well, quirkiness. Naturally, you start off with the gun-toting gangsters, but soon you face mercenaries, seasoned professionals, and sewer-dwelling LARPers with medieval swords and armor.

You don’t just face dozens of dumb meat bags, either. Every area is split up into multiple levels, with tough enemies and bosses to face down. The occasional jackass with a shotgun can be easy pickings. Automated turrets, however, are a different matter. You can say the same for the occasional mini-boss that forces you to fly around the room aiming for its weak spot. Boss fights bookend each area, and these are often the toughest battles in the game. Whittling away their health bar requires you to use every trick you’ve learned, lest you end up full of holes. 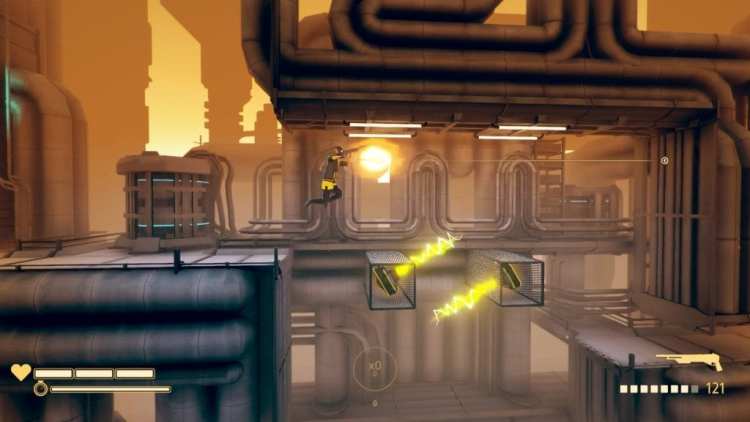 Later missions challenge your platforming skills rather than your aim.

Despite being a brief game with just a handful of hours, My Friend Pedro packs enough enjoyment to make that time fly by. I never realized how much I missed bullet time until Pedro came knocking. The ability to slow down time and twirl through the air while dropping five or six dazed enemies with a shotgun is the kind of cathartic thrill that never grows old. Being able to split fire — the practice of, while dual wielding, locking one weapon on an enemy while freely firing the other — also adds to the mix.

It can be tough to get everything right until you find a rhythm. However, once you do, each fight is like a dance of death so beautiful you could swear it was choreographed. I spent a lot of time in My Friend Pedro smiling or chuckling through each bloodbath. It’s also hard not to indulge in the game’s underlying dark sense of humor. There are some jokes in the dialogue, sure, but not much makes me laugh like rolling down a staircase on an oil drum while shooting at nerds in armor blaming their fresh bullet holes on lag. 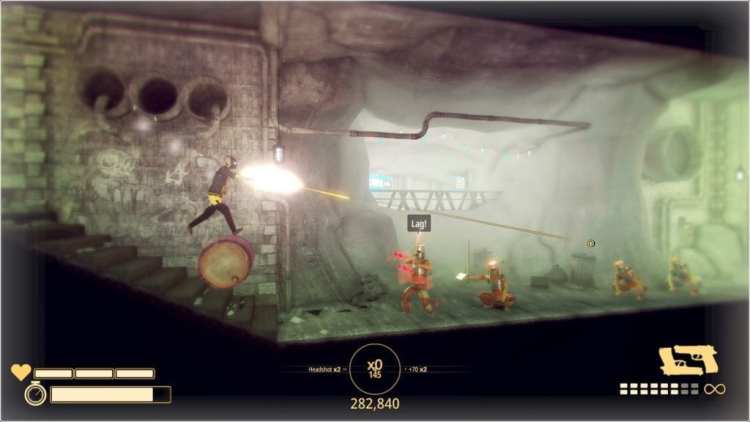 Despite My Friend Pedro‘s best selling points, there are still some flaws. The controls can be tough to get used to, as you must press or hold several different buttons at once or risk shooting a wall or getting blown away. I’d say the controls take time to master, but even near the end of the game I still found myself accidentally going out of my focus mode while my fingers scrambled in panic.

It also doesn’t help that the built-in auto aim can be so damn goofy. In a lot of situations, you have to use split aim to lock onto an enemy and prep to aim at another before entering a room. At times, the game’s target will lock onto a guy in another section who isn’t even a threat yet. Tapping the button to try and change targets doesn’t always fix it, either. Auto aim can also snap onto the wrong target, and no amount of thumb flailing can change the game’s mind.

These are, however, small issues, and don’t usually make the game harder than it should. If anything, My Friend Pedro isn’t a difficult venture at all. Using bullet time already makes your aim quicker than your enemy’s. Additionally, your health bar is sectioned into three chunks. Each can refill to their respective maximum amount while you’re out of combat. Ammunition and health items are also plentiful, so you’re not often left wanting. There are multiple difficulty levels if you’re looking for more challenge and replayability, however. 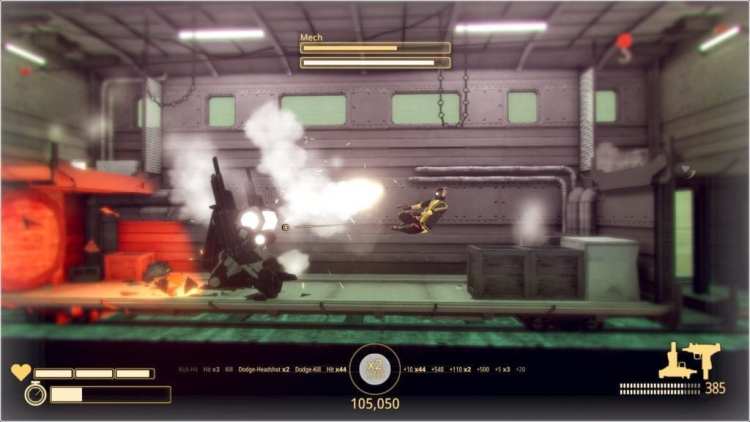 The glowing spot is always the weak point.

Regardless of the issues, I loved my time with My Friend Pedro. It didn’t take long to finish, but it’s still a great little game about a man and his talking banana solving problems with wanton violence. If that’s not friendship, I don’t know what is.

Despite some minor bruising, My Friend Pedro is a perfect blend of synth music, blood, action, and slow-motion thrills. Stop worrying; bullet time is cool again.

Amid Evil review – ragin’ and magin’