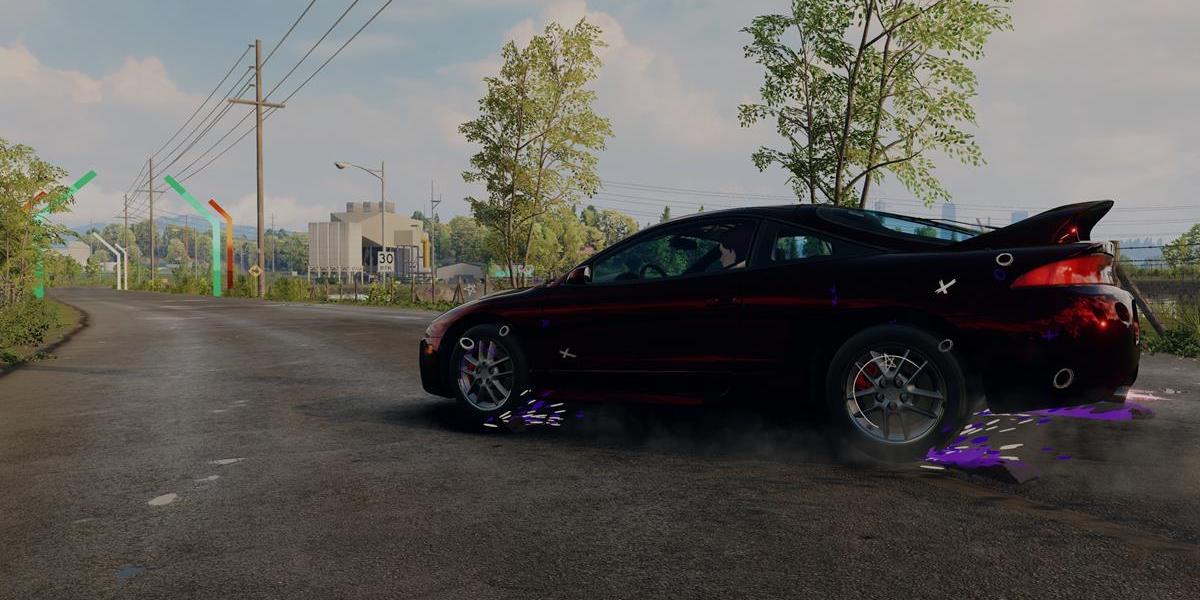 During my first few hours with Need for Speed Unbound, I was hooked. An open-world racing game with defined rules, risks, and penalties for failure? That’s novel, innit? You work your way up as a street racer, cautiously keeping an eye on how much money you have. A few missteps are all it takes to find yourself in the red, and you’re always a moment away from a potentially ruinous chase with the cops. But after those first few hours, the rush faded and I was left with a game that is undeniably fun to play, but also one that obsessively railroads you and forces you to contend with some truly odd, unfriendly design choices.

Need for Speed Unbound has a plot. It’s not necessarily a good plot, mind you, but it’s more than serviceable enough for a racing game. It’s a typical “we tried really hard to sound urban and hip despite having no idea what we’re doing” type of story, filled with familiar archetypes and dated cultural stereotypes dating back to the early ’00s. Your supposed best friend has ripped off you and your father figure, stealing your car and dashing your trust on the way.

But when they show back up on the scene, your character decides to get even by qualifying for and finally winning a racing tournament that will get their ride back. They make no effort to just take their stolen car back the normal way for whatever reason, even when there’s nothing stopping them. There needed to be impetus, I guess. It’s perfectly fine for a game and miles more interesting than, “you’re a nobody in an open world, so drive around doing things at random.” The voice acting is high quality, although the character models are all cel shaded, which you’ll probably either hate or tolerate. But all of that is a bonus in a game that’s about driving, drifting, and racing, which Need for Speed Unbound excels at. It’s just a shame that it bites off more than it can chew. 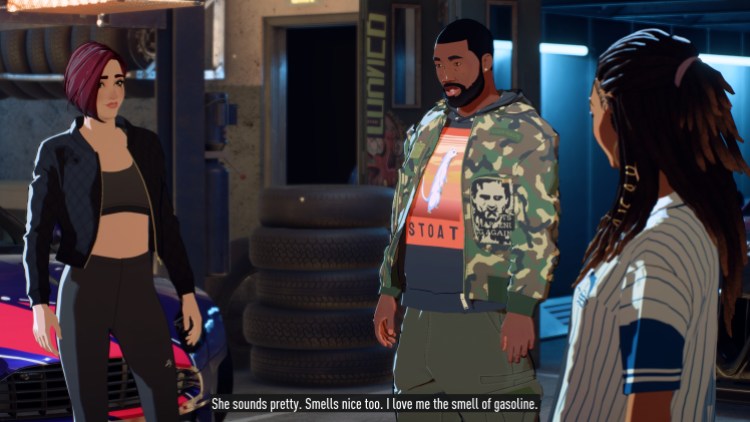 The campaign is divided into four weeks. Six of the days of each week have a day and a night where you can head out into the town and make bank. The seventh day is for a series of races that advance the plot. You need to have saved a certain amount of money and have a car at the specified ranking by the end of the week. But you don’t actually need to. If you get to Saturday and you don’t have the cash or the ride, you get to redo Friday until you do. This was necessary, as the game couldn’t just give you a game over, but it’s also an excellent example of the game’s lack of foresight. What’s the point of the week of time if we just get infinite days?

There are meetups around the city where you go and take part in events. These events have buy-ins, which require you to put down cash in order to win more depending on how high you place in the event. Since you can run out of money, some events have no buy-in. Much like the aforementioned redoable Friday, this is another thing that damages the immersion the game tries to build. If you do well in an event, you’ll make a profit, but you can also just break even or lose money.

Complicating this, you only get four retries on the normal difficulty. I don’t know about you, but I like to be able to retry races in racing games to my heart’s content. Need for Speed Unbound doesn’t care what you want. If you put the game’s difficulty on easy, you get 10 retries. Run out and you just have to accept your performance. 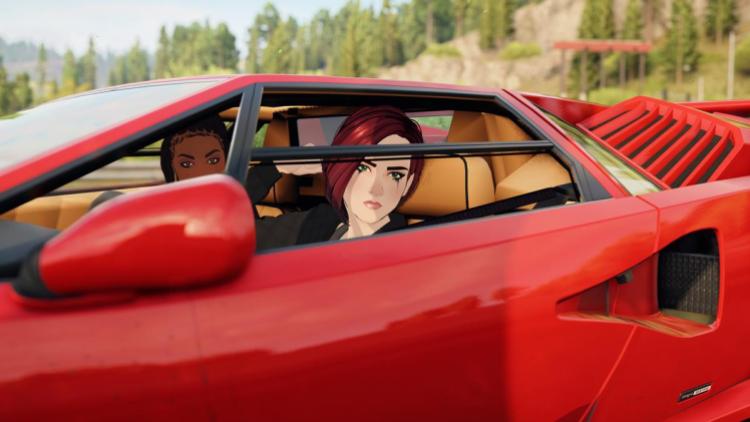 That’s how they getcha

But it’s not that simple, because it’s not always about your performance. The AI racers have a giant rubber-banding issue, which I’m surprised to see in such an old series. You can be far ahead of second place, only for three or four racers to come barreling past you in the latter half of the final lap. Similarly, the racers in the lead can get so far in front of you that you can’t catch up, even if they shouldn’t be able to go fast enough to do that. This is inconsistent, at least. There are times when the opposite happens and you’ll get into first place and stay unnaturally ahead of the competition. It feels horribly untuned.

Any time you complete an event in Need for Speed Unbound, you gain heat. Whenever you have heat on you, cops will start chasing you if you stay in their line of sight long enough. As you get more heat, the cops become more numerous and persistent. Helicopters will show up, too. After you finish many races, you’ll find yourself forced to outrun the cops at the end. If you’re at heat level five, this gets old really quickly. And much like the AI racers, the cops cheat.

Sometimes the game will just straight-up teleport a cop car right in front of you, which causes you to get seen. Escaping from cops will often have another car coming right your way. I’ve lost the cops and hid out in what I thought was a safe place, only for more cops to magically know where I was, leading to another chase. At the highest heat level, they are insanely persistent. You might find yourself being chased for 10 minutes. When they have a helicopter on you, getting away is a pain in the ass. 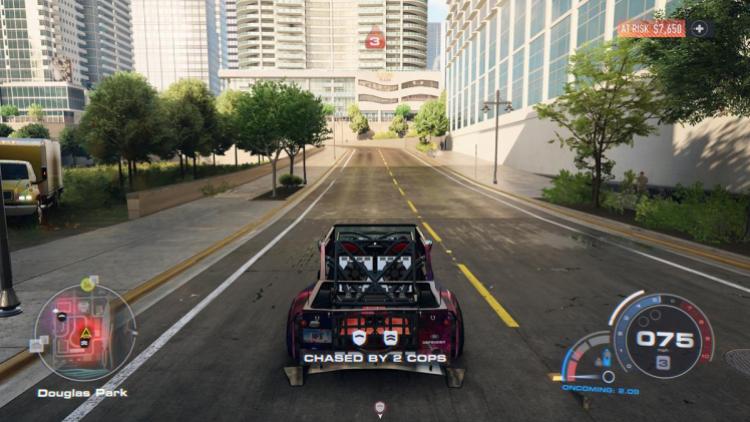 If the cops take your health down or your busted meter fills up, you respawn with all the cash you had on you gone. When you win money in Need for Speed Unbound, it isn’t yours right away. You have to return to a safe house and bank it. Otherwise, you can lose huge amounts of money to the cops. That is, if you don’t just quit to the main menu, which reduces their threat considerably. They’re still goddamn everywhere, though, so they never stop being a giant annoyance. Your heat carries over from day to night too, so after you’ve completed just one event, you can’t drive freely around the world.

And God forbid if you need to quit a race you’ve already started. You’ll lose your entire buy-in, which can be thousands of dollars. Worse yet, if the game crashes during a race, you lose your buy-in that way too.

There are challenges, collectibles, and side quests to do, but doing them is less appealing because, if you focus on them, all it takes is one cop car to put you on the run. The challenges also offer such little money that they’re not all that worth doing to begin with. This brings me to my next big issue with Need for Speed Unbound. The amount of money you get for a lot of the game just isn’t enough. You get to pick from one of three free cars early on and you’ll need to upgrade it to win races.

Upgrades are so expensive, however, that you typically won’t have enough to buy a new car. You win new cars from the Saturday events and, yes, you could feasibly grind for a new one. But the required car ranks get higher, so you’ll need to grind up their upgrades as well, plus you need to buy upgrades for your garage to even be able to buy new parts. It’s so tedious.

One of the best things about racing games is being able to swap between cars at your leisure. Need for Speed Unbound doesn’t want you to do that. It wants to force you into an extremely myopic scenario where you’re constantly running from cops and ignoring all but the highest-paying events. On top of this, instead of racing as much as I wanted, I pack it up when I’ve got about four and a half heat, just so that I don’t have to deal with helicopters and long chases. 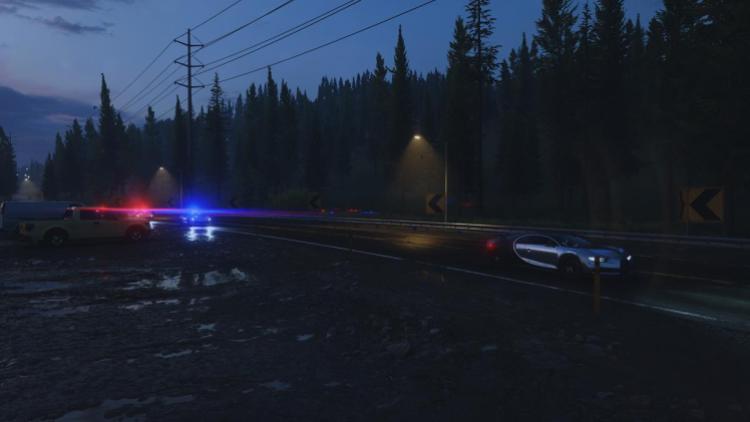 “But there’s the online mode,” you might be thinking. But the online mode is also not without a litany of issues. Jumping online has you go into an instanced open world with a handful of other racers. To do a race with other people, you have to drive to a meetup and hope one of those few people clicks accept. You also need to have a certain number of racers join to even race. Why anyone thought a racing game didn’t need some kind of matchmaking is absolutely beyond me. Need for Speed Unbound takes a fun driving model and does its absolute best to throw spike strips on the road.

And while the driving is enjoyable, not everyone will like it, as it continues with the almost Mario Kart-esque tap-to-drift mechanics. Honestly, I feel like the drift just doesn’t work right some of the time. It can be changed, but it doesn’t feel as great as it could. But I do need to stress that I do like driving around in Need for Speed Unbound. I enjoy a lot of the concepts and I appreciate what it’s going for.

But it just doesn’t make for a compelling experience. I want to be able to race a bunch of different cars and do all the challenges and events I want. I don’t want to have to run back to my safe house and constantly escape from omnipresent cops. With fine-tuning and more forethought, this could have been a really special open-world racing game. Instead, it’s a fun racer buried under too much tedium and railroading to hold a candle to the greats. 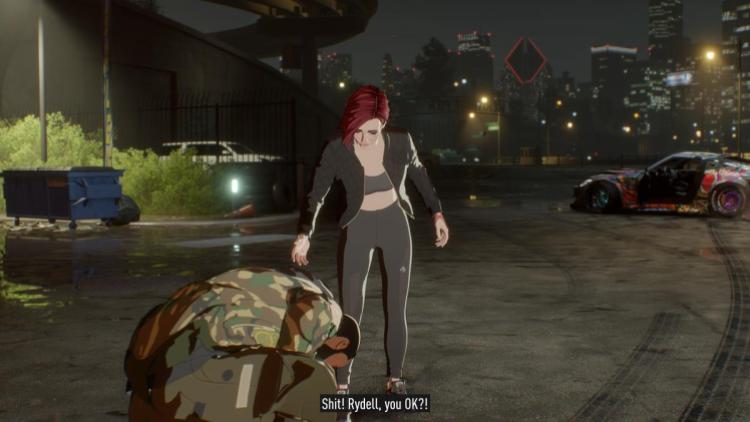 Need for Speed Unbound has the racing and the world down pat, but the game is marred by too many roadblocks and a heaping helping of tedium.