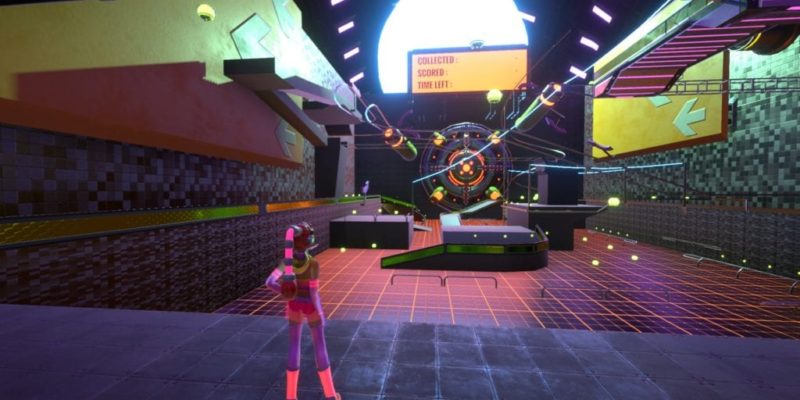 The first time I ever heard about Neon Tail, the thing that grabbed my attention was it being inspired by Jet Set Radio. With my curiosity immediately piqued, I looked into it and discovered that, while it certainly was inspired by that series, it isn’t meant to ape it. Truth be told, though, that inspiration was all I needed to know there was no way I wasn’t going to play this game.

Neon Tail wastes no time in setting itself apart from its inspiration. While you can see the similarities, it’s very much its own game, with notably different mechanics and a totally separate focus. It enters early access today and, naturally, doesn’t have much in the way of content just yet. Still, I’m already impressed by much of what I’ve seen. So, why should you care?

There isn’t much story content in Neon Tail at the moment, but it does hint at a compelling structure. You play as Ruby, a young woman with long red hair who wants to be a skate idol. Skate idols are constantly shadowed by drones that show them moving around and doing rollerblade tricks. Performing said tricks adds reputation points to a total that gives perks to the idol. The available content ends with Ruby getting her F-level license. The game’s structure obviously implies that you’ll work your way up to higher licenses while doing missions and increasing your reputation. 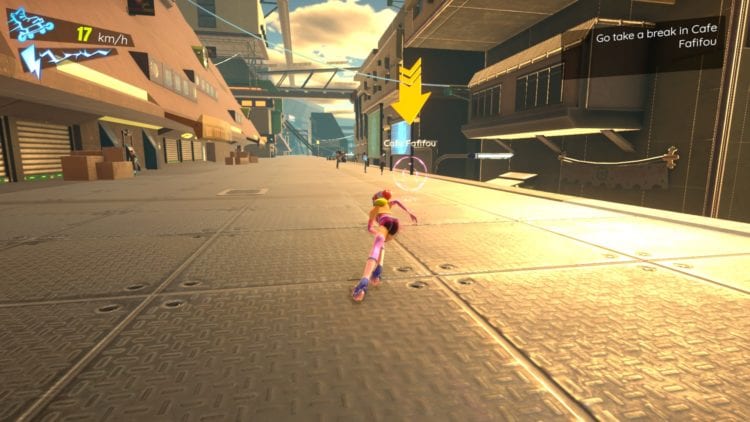 All-in-all, there was only enough structured stuff to keep me busy for about an hour. I did the first part of the tutorial, went to the second part – which gives you a choice between trainers – and then the game locked up and I couldn’t move or do anything after watching my trainer do a move. I shut the game down and re-launched it, but the same thing happened again. Thankfully, on my third try, it didn’t do this and I was able to finish the tutorial.

Once out of the tutorial, Neon Tail had me skate through a large, open map with two choices as to what to do next. I could either see about getting a job or go straight to taking my license test. The only available job was as a package courier, which saw me picking up a package and delivering it within a time limit. You’ll clearly need to do jobs to get money to pay for new skates and accessories and the like. But the only thing you can buy right now is bubble tea at a couple of shops. Strangely, buying tea is the only way to save your game or read your e-mails. I didn’t like not being able to save at any time, but this did make me memorize where the shop was.

Neon Tail‘s gameplay, as I’m sure you’re already aware, focuses primarily on rollerblading. I have to say, though, it controls and handles differently from any rollerblading game I’ve ever played. For starters, moving the analog stick forward doesn’t move Ruby an inch. The right trigger is used to accelerate forward, while the left is used to accelerate backward. Additionally, there’s no brake button. If you want to stop, you have to stop accelerating and spin in a circle to put a halt to your momentum. It’s actually really cool. 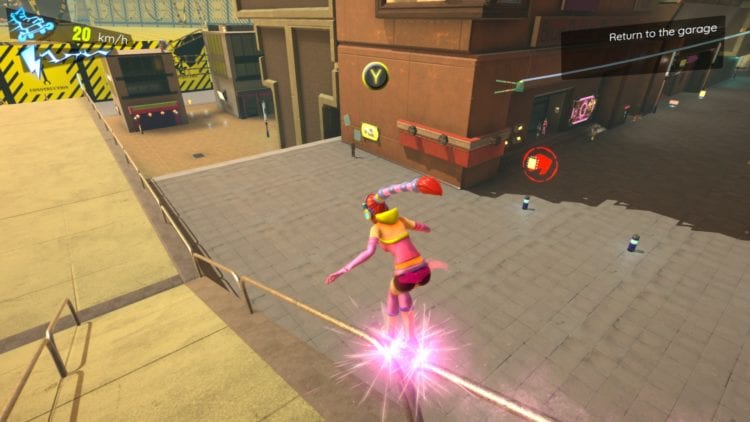 It does take some getting used to, though. In the time I spent with the game, I didn’t fully get a grip on the movement. It felt too slippery to me, and I found myself fumbling fairly frequently. That said, it’s still pretty easy to get yourself moving, and the controls are intuitive enough to mostly understand after just a few minutes. The movement starts once you accelerate, and you then use the left stick to pick a direction to move in. So, in order to move forward at full speed, you have to hold down the right trigger while holding forward on the left stick. But you still always need to keep your momentum and gravity in mind. If you try and rollerblade up an incline, for instance, you’re obviously going to start moving backward, as rollerblades don’t work on slopes.

The game gets around these terrain issues by putting rails and grindable surfaces everywhere. Similar to many other games, you simply need to jump in the direction of a rail to have Ruby immediately start grinding it. Neon Tail offers a lot of leeway in regard to this, too. You don’t have to land on the rail itself, just near it, and Ruby will basically magnetically attach to it.

Grinding rails counts as a trick and can be chained with others. There currently aren’t many means of tricking, though. You can spin in the air after jumping, either sideways, forward, or backward. Holding both triggers down simultaneously when you’re going above a certain speed will also have Ruby manual. This is predominately how you seamlessly chain tricks together. 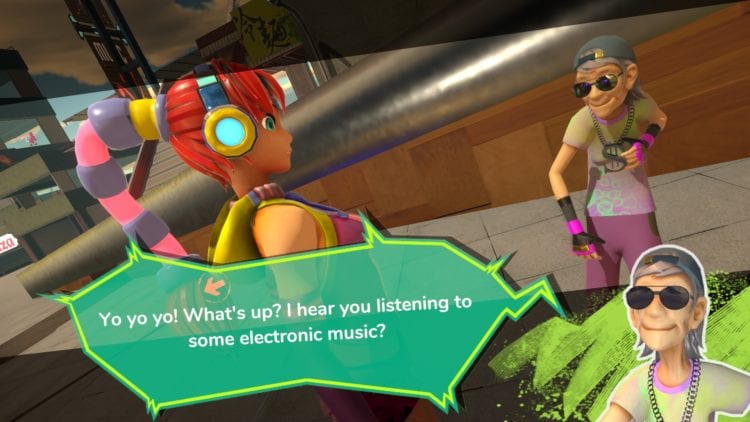 First, you accelerate, then you jump, spin, manual upon landing, jump and spin again, and manual once more. Then you land on some rails and it’s pretty easy to get your combo high. There are times where you’ll need to just get reputation points in order to progress, so you may have to stop and goof around for a while until you get enough points.

Thankfully, the currently-available map is large. It actually feels a bit too big, if that makes sense. You seriously have to cover a surprising amount of space at times, with large, flat stretches of the city spread out in front of you. These areas do have certain things that make them visually distinct from one another, with unique geometry and even a few interactive easter eggs.

Neon Tail feels similar to Jet Set Radio in terms of visuals, but it isn’t cel-shaded. Most of the character models are really basic, but Ruby looks decent and generally animates well enough. The textures are also solid, and the game is fairly colorful. This doesn’t look like a game made by a mere three people, though. Developer Rocket Juice is really doing a good job here. The presentation, just like the controls, is very solid and will no doubt only improve as the development continues. 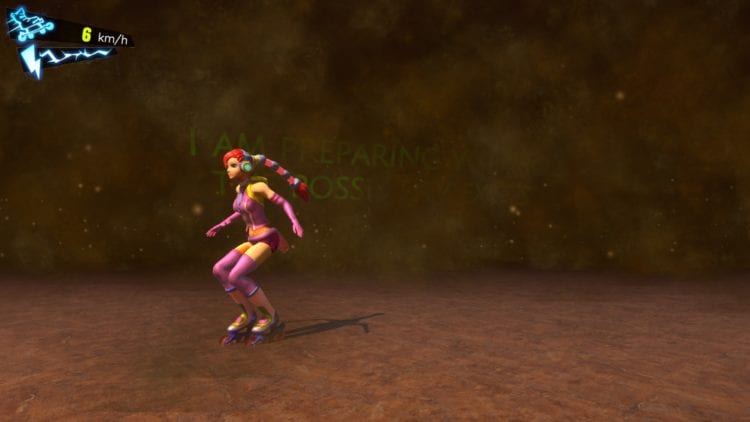 Overall, Neon Tail scratches a similar kind of itch to Jet Set Radio. There isn’t much to it just yet, but the gameplay is solid, even if the controls feel a bit too finicky and accurately landing where you want is a pain. The presentation is well-done too. I’m confident that the game will be a good title once it’s finished, and I’m looking forward to seeing what’s in store for its future.