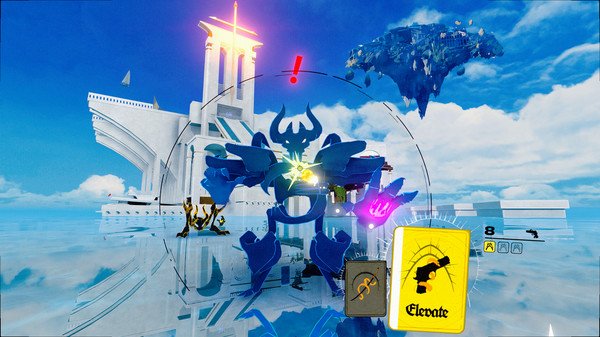 Annapurna’s Interactive Showcase revealed a gameplay trailer for Neon White today, showcasing some of its parkour heavy gameplay. The game is a mixture between a platformer and a first-person shooter, with one primary goal in each hand-crafted level: speed.

From the creator of Donut County, the game is described as a “speedrunning FPS,” meaning the entire game is built around clearing levels as fast as possible. Each level is also designed for replayability, with bonus shortcuts and collectibles unlocked as you play the game. So what is this “speedrunning” gameplay, exactly?

A need for speed

At each level, players have to traverse different environments in Heaven, exterminating demons that invaded the godly world. As you run through each level, you’ll pick up guns — or soul cards — along the way that have two effects. The first is the self-explanatory weapon — you’ll be picking up shotguns, SMGs, or pistols and using them against demons. However, each gun also has a secondary effect. You can discard a gun and gain a boost in movement, allowing you to reach the end of the level faster. For example, discarding a shotgun propels you in a certain direction like a fireball. Clearing a level grants you experience points in the form of insight. As you gain insight for each level, more shortcuts will open up, as well as a unique collectibles.

At certain points, Neon White and its gameplay will take a backseat to the narrative. In the game, you play an assassin named White from Hell, who is competing with other demons for a chance to stay in Heaven. You’ll unlock some memories about your past life throughout the game and gain information about your fellow assassins. There’s even a slight dating sim element, where you can talk to your fellow assassins in between levels and give them gifts.

You can check out the gameplay trailer for Neon White below. Neon White has a planned release date of winter 2021. For now, you can wishlist the game on Steam.

By Kurt Perry4 mins ago
News