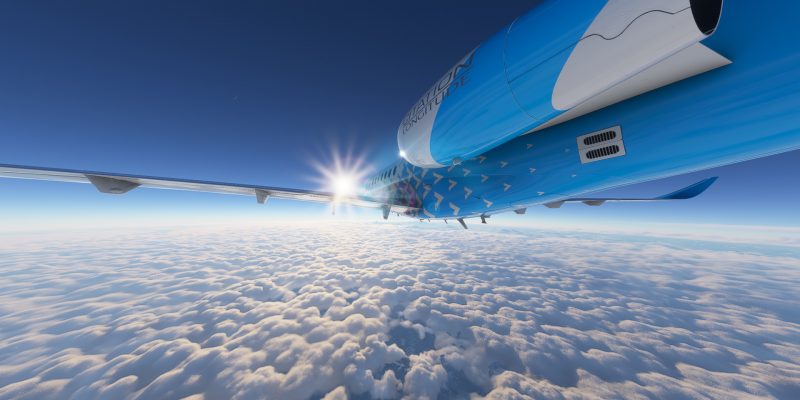 Following the reveal of the new Xbox Series edition of Microsoft Flight Simulator, Asobo’s Jorg Neumann revealed even more details about the future of the sim. PC players will soon benefit from various improvements and additions made to give new console players an easier introduction to the advanced mechanics.

This includes new AI functionality called Flight Assistant that will allow the system to handle flying aircraft to specific points of interest via a single button press. Flight Assistant also includes a new auto-land feature that will enable the AI to land an aircraft “anywhere,” including dirt strips and snow-capped hills. And on the topic of rough terrain, new graphical effects for such environments will also arrive to the sim. These include more pronounced tire smoke when landing on an asphalt runway or dirt/snow strip, and also sea spray when landing a floatplane on water. Floats for the rugged STOL aircraft like the Piper X Cub will also be available for free, allowing such aircraft to explore even more remote locations.

Other new features coming to Microsoft Flight Simulator include new and improved tutorials. The number of tutorials will be greatly increased, and even existing ones will receive overhauls to be more focused, but also shorter. These will make it even easier for newcomers to become familiar with the various flight mechanics and different aircraft instruments and systems. Points will also be awarded for how well operations are conducted during the tutorials, thus giving student pilots more insight as to exactly how well they’re performing.

Note the new landing effects when landing on different surfaces.

Asobo decided to include these improvements after seeing an influx of more aviation aficionados who’ve been with the series for decades, as well as newcomers who may be experiencing a flight simulator for the very first time, especially after the Xbox Series edition releases. Even so, the developers promise that the experience is not going to be “gamified” (in other words, dumbed-down) for the more hardcore enthusiasts out there. All of these additional features like the Flight Assistant are purely optional and can thus be ignored by anyone who wants a more authentic flight experience.

Other new features that Microsoft Flight Simulator players are bound to enjoy are the more detailed world map and points of interest. The new map will feature satellite imagery from Bing’s database, including city labels. Finally, new information snippets will also appear next to points of interest on the map as well as in-sim while flying, giving virtual pilots more of a guided tour when they go sightseeing.

The new Flight Assistant will be intelligent enough to even keep an aircraft from stalling.

All of these enhancements are expected to drop into the PC version of Microsoft Flight Simulator when the upcoming Sim Update V rolls out on July 27, the same day as the release of the Xbox Series X|S edition of the sim. Asobo also confirmed that the experience will be the same regardless of platform, so all updates made to the sim from now on will be enjoyed by both console and PC pilots equally.

From 56:40 to 1:09:10 of the full Xbox Games Showcase Extended presentation, all of these new features for Microsoft Flight Simulator are shown off: