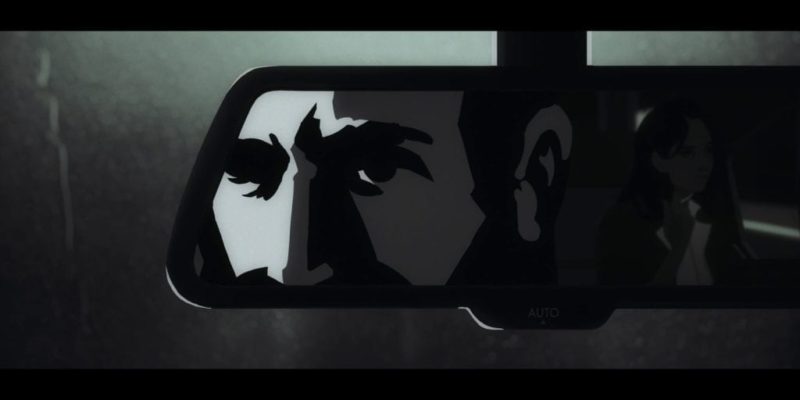 Part noir-style crime saga, part people-meeting simulation, Night Call is an enjoyable fusion of two things that you might not think fit well together. Players must find a serial killer roaming the streets while collecting fares as a taxi driver. It’s a concept that isn’t immediately selling itself, but the two dynamics work together to create a couple of fun-filled hours.

Where the rubber meets the road

Set in a beautifully simple black and white recreation of Paris, Night Call puts players behind the wheel with Houssine. Houssine is a night shift taxi driver, and as such he chauffeurs a lot of interesting characters. The interactions with each of these passengers are really engrossing and superbly written. They all seem like real conversations that you would have with actual human beings. There was a lot of dialog that I likely won’t forget for a long time. There is a priest who shares (but doesn’t preach) some of his religious views and tells a story from a confessional. You can also pick up a young couple who are looking for a hotel room because they think they are ready to take their relationship to the next level. There are also a handful of crazy occurrences like taking a ghost to meet the mayor or driving a paying cat to the train station. These are a fun break from the serious tone of the game, even if they mostly leave you scratching your head.

By and large, these interactions are the best part of Night Call. They tell tales of career struggles and identity crises yet also don’t shy away from mature topics like sex and gruesome violence. All of this paired really well with Paris as a setting. Many of us who have never been to or lived in “The City of Love” have a romanticized image of the Parisian capital. Yet, seeing it through the tired eyes of its late-night inhabitants gives an uncommon perspective of the city, one that feels authentic and unaltered. I found myself being the confidant to stories that I had no idea how to react to. It keeps the player on the edge of their seat since you never know what baggage your next patron will bring with them. 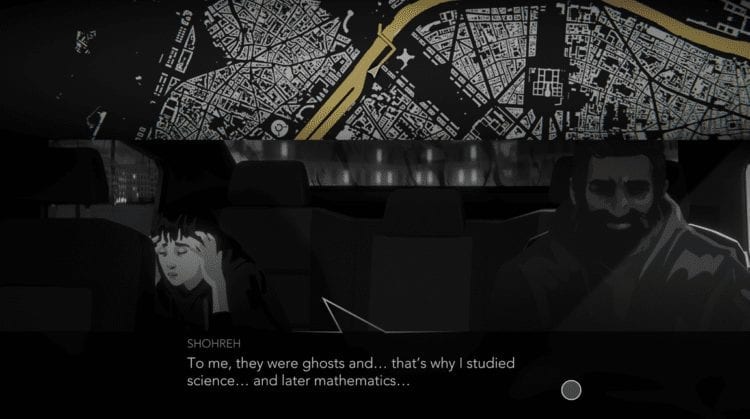 These moments are so easy to get caught up in that you might forget there is a bigger picture going on. Houssine is the victim of an assault by a serial killer, and the only one to ever survive at that. Houssine is then forced by a police officer named Busset to probe his passengers and search Paris for details about the murderer. There is a small selection of cases that you can play through, but each of them is nearly identical up until the finale of the case. Houssine will wake from a coma, be extorted into investigating five suspects, and spent the week picking up taxi fares in hope that some information will be provided.

I won’t lie — I was feeling pretty exhausted with Night Call by the time I completed the final case. There is a lot of repetition between the cases, either in the fact that you’ll pick up the same passengers over and over or that most of the story bits are verbatim clones between cases. The repetition of the passengers is especially problematic. The first time I drove them to their destination I was so entertained by the interaction that I had with them. After that I found myself clicking the mouse to skip through the dialog as fast as possible since it’s the same in every case. Even characters whom I loved the first time through felt like they were in the way of me reaching the goal of solving my case, instead of being welcome distractions to dark happenings. 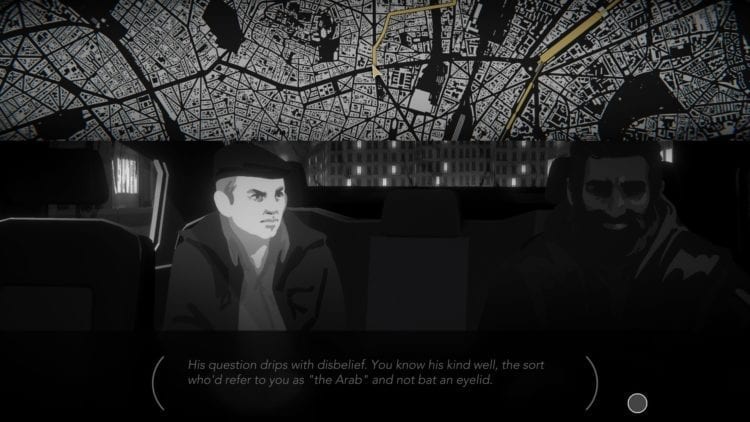 With so much repetition in the core gameplay, it really hinders the game’s replayability. I truly think that you could stop playing after your first case because you will have experienced everything you need to in order to have a satisfying time with the game. Night Call rarely does anything to evolve itself from case to case. This is a bummer because it felt like it was going to be an episodic crime thriller with a new protagonist, different sections of Paris to explore, and new passengers to get wrapped up in from case to case.

Shut up and drive

Night Call’s gameplay is simple, which honestly fits the game very well. Interactions with passengers take place in your taxi cab in a visual novel style. Passengers will tell their stories and the player will have a handful of different responses that affect how the conversation unfolds. You start the night with an overview of Paris and can choose what patron to pick up. There isn’t much urgency to picking up certain people, as they pop up all over the city in a seemingly random fashion after you drop someone off. You’ll want to keep an eye out for the suspects so that you can try and uncover something that could link them to the crime. Although, honestly, I did not find these interactions with suspects very telling as to if they were the culprit. Most of the important evidence comes from the various points of investigation around the city and details about the case that you get from newspapers, the radio, or conversation with passengers. 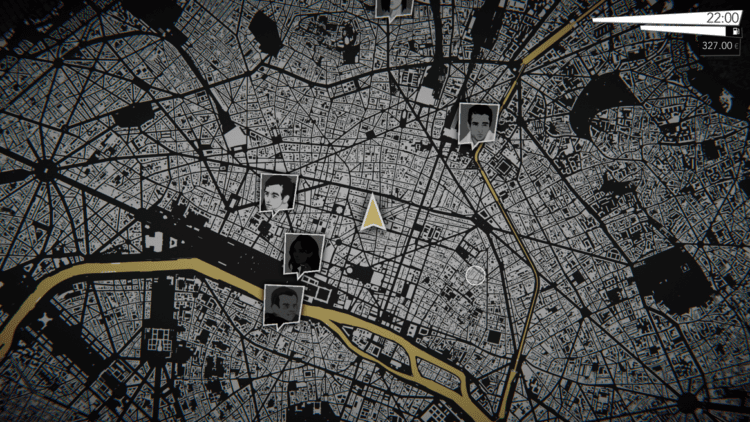 Evidence that you gather is all stored on a corkboard in your apartment. Using the tried and true method of connecting evidence with suspects via thread, you will start to piece together who is behind the murders. There is a lot of evidence that is collected during investigations. So much that it can clutter the board at times. I really enjoyed the fact that there was a ton of documentation that didn’t have a lot of bearing on the solution of the case. It forces you to prioritize what leads need to be followed and what details have the most weight. You won’t just convict the person with the most evidence against them. You’re going to have to use your brain to solve these cases.

Night Call is a great experience that I wish I were more impressed by. On one hand, you have a cast of some of the most incredible, well-written characters that I’ve interacted with in 2019. It’s a pretty impressive feat since you converse with them in just a few five-minute spurts each. On the other hand, the game is so repetitive that I really didn’t enjoy playing it after the first case. Your mileage might vary here. This problem could possibly be remedied by handing control to someone else and checking in when they are in a scene unique to a case that you haven’t played. If you prefer to experience the game by yourself, or don’t have a player two around, there really isn’t much of a fix for this. If you can make it through a game filled with repetition, the conclusions of Night Call‘s cases are overall fantastic and exciting to uncover.

A late-night cabbie is blackmailed into uncovering a serial killer among his passengers.
7

The characters you meet in Night Call are the stars of this noir-style thriller. Interestingly, the crime plot takes a backseat to meeting the residents of Paris and learning about their struggles and success. Unfortunately, the game becomes repetitive after the first case due to duplicated dialog and a lack of gameplay evolution.