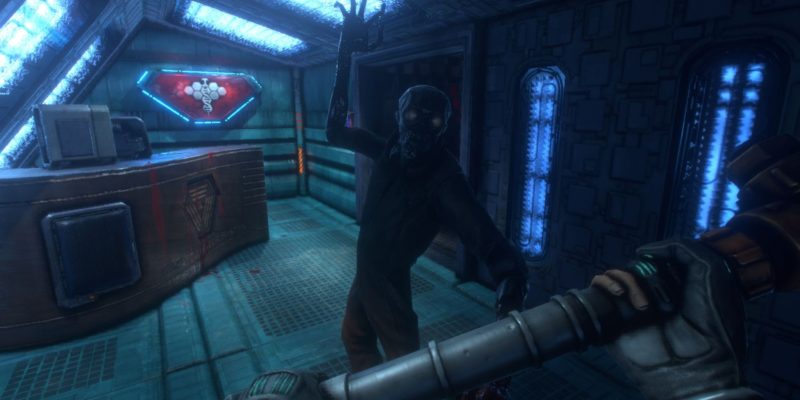 A ‘pre-alpha’ demo of Nightdive’s planned System Shock remake is available through both GOG and Steam today. I’ve not had chance to take a look at it yet, but it’s said to be around 10-15 minutes long. It’s early stuff, so expect placeholders and some wonkiness.

The demo is proof of concept for the Kickstarter, which has also launched earlier today. Nightdive are looking for $900,000 USD to help get this made, and seem to be rolling along quite nicely at $180,000 as I write these words.

If you’re unaware of the Nightdive name, they’re the people who managed to wrest System Shock 2 back from the brinks of legal hell to get it re-released on digital platforms in 2013. They tried to do the same for No-One Lives Forever, but sadly were unable to entangle all of the red tape for that game.

This release of System Shock will be “a complete remake … rebuilt from the ground up with the Unity Engine”. That means it won’t be exactly the same, but they’re trying to bring it back “as you remember it”. “Many improvements, overhauls and changes are being implemented to capture the spirit of what the original game was trying to convey, and bring it to contemporary gamers,” the Kickstarter pitch states.

You can expect complete mouse support, for example. The 1994 original was from an era before mouselook was standard. Terri Brosius will be reprising her role as SHODAN, and recording new dialogue for this remake. Chris Avellone is involved too, because this is a Kickstarter and that’s the law.

Anything Nightdive make beyond $900,000 USD (up to $1.7 million) will go towards the following stretch goals: “Enemy limb dismemberment, More puzzles, Ammo types/weapon settings, Vending machines, Basic crafting/research, RPG leveling with perks/skills, Weapon upgrading, Hardcore mode (No respawning), Ironman mode (Only 1 savegame. If you die, the save is deleted)”.