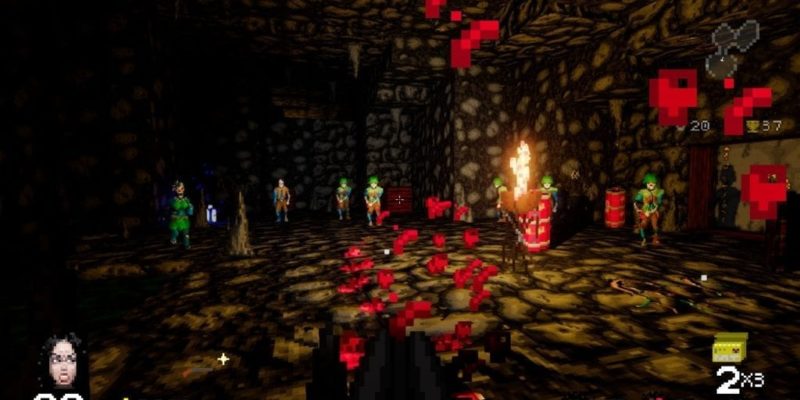 We’re in the midst of a bit of a retro first-person shooter renaissance. It’s become clear that many players miss the single-player games of the ’90s and most throwback-games mimic them directly. Nightmare Reaper wears certain influences on its sleeve, but it’s not at all afraid to combine retro design sensibilities with more modern ones. It’s a fairly fun game, but it can get really repetitive in spots. It also runs horribly, which is surprising for a game with retro 2.5d visuals.

Welcome to my nightmare

Nightmare Reaper doesn’t have an intrusive narrative. The game starts with you fighting zombies and demons in a series of caves. After finding your exit via a blue sigil, you awake in a hospital room. You play as a young woman with undisclosed mental trauma and all the game’s levels are set in her dreams. With each level you complete, you’re given a single note on her table that slowly reveals the narrative. I like the way the game does this, as it doesn’t force you to have to wait to get back into the action, yet drip-feeds just enough to whet your appetite.

Structurally, Nightmare Reaper is sort of a mix of episodic games and, here we go again, a roguelite. As the game is in Early Access, this is only the first of three episodes and it has ten areas. These ten areas are made up of a few randomly-generated levels each. To start a level, you simply walk over to your bed and press the use key and your character will go to sleep. If you die during a level, you then wake up and will have to start a new run. 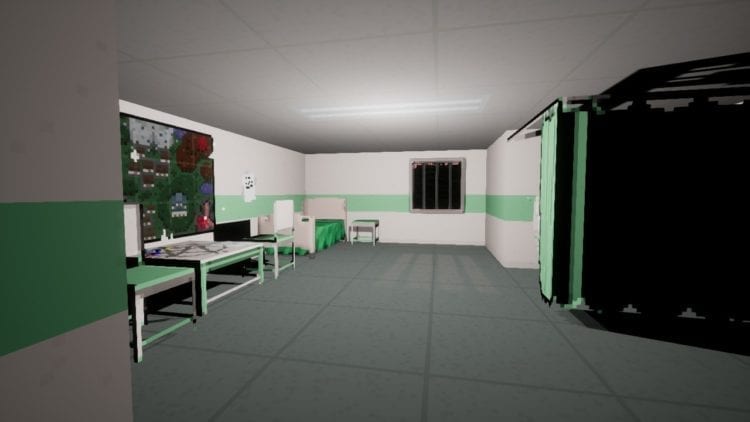 These levels function like standard ’90s FPS fare. You need to find the exit, and to do so you must explore the level. Sometimes you’ll need to hit a switch, other times you have to find keys. However, the gameplay is rather different in several ways. For starters, you have a skill tree, but it’s a skill tree that’s different from every other skill tree I’ve ever seen.

Early on, you’ll find a game cartridge in a dream that you put in what appears to be a Game Boy Advance SP that you use in both the dream and real worlds. You use this to access the game’s menus. The skill tree itself is meant to evoke the overworld map from Super Mario Bros. 3. Instead of regular levels though, each spot on the map holds an upgrade. You find gold and treasure in the levels themselves and, once you have enough gold to purchase an upgrade, you go into the level via the skill tree and have to play a little 2d platformer. Make it to the exit and you’ll unlock the power-up.

Honestly, this might be the coolest skill tree system I’ve ever seen. It’s a really fun, unique idea that contrasts nicely with the FPS gameplay. Naturally, you’ll want a lot of gold in order to unlock these levels. Coins and treasure can be found both my defeating enemies and finding them strewn throughout the levels. These levels can be annoying, however. Sometimes you have to jump in a really tight space and have to move back and forth and try jumping in the hopes that you somehow managed to line the pixels up correctly. Your character’s hitbox is also wider than her sprite, as I’d sometimes get hit by something that didn’t quite touch me. 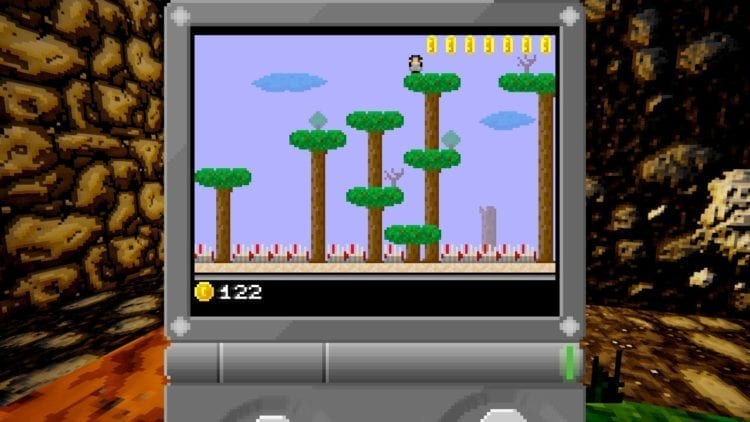 She carries a secret

Each level in Nightmare Reaper also has a few secret areas packed with treasure. All you need to do to move on to the next level is to find the exit, but actively hunting for all the enemies, secrets, and treasure is the best way to increase your gold. You get a 50% multiplier on all gold found for finishing the level, and an additional 50% for each of the other three objectives. This gives a great incentive to explore thoroughly instead of rushing to the exit.

Nightmare Reaper‘s gunplay is thankfully solid. You’ll find a decent assortment of weapons in each level. These weapons use either light ammunition, heavy ammunition, or magic. Light ammunition is used for pistols, shotguns and the like and heavy is used for explosives. Magic is used for any spellbooks or staves you find. These weapons also have different levels, with the kicker being that you can only take a single level 1 weapon with you after finishing the level. Everything else is sold for gold, which is enough of a reason to pick up every weapon you see.

The shooting feels good and the weapons are fun to use. My personal favorite is the six-shooter, as it does a good amount of damage while also having a high rate of fire. Magic is weaker but has various elemental effects, such as ice and fire. Unlike most 2.5d FPS games, enemies in Nightmare Reaper take more damage from headshots too. When you kill an enemy, they explode like balloons filled with coins and gore and paint the world in their blood. After a fight, the gameworld is a colorful mess of blood and entrails. It’s really quite satisfying. 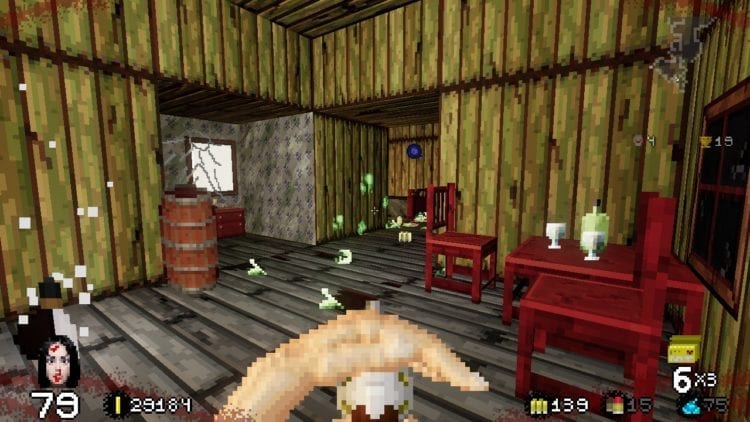 Not the sweetest dream

That being said, the enemy variety is lacking. You’ll fight the same small handful of enemies over and over and over again and they’re just not very interesting. Three of them are zombies and two of them are demons. The sprites also don’t look very good. The demons, in particular, seem really cartoony and silly-looking.

They can also be a chore to fight, as almost all of them will just shoot you on sight. The zombies with guns will frequently just have you popping out behind cover to headshot them from a distance, which gets old. The demons also have poisonous blood, so after killing one you need to be careful not to walk where they blew up or you’ll get hurt. I’d really like to see some more enemy variety and some better design in future updates, as I’m just really not feeling what’s currently in the game.

There are also powerups in Nightmare Reaper, but they’re frequently not very useful. They run out really quickly if you haven’t purchased upgrades and I tended to find them only after fighting a bunch of enemies. Most of the time I grabbed the game’s combat powerup, I had no enemies to use it on, which is a bit of a shame. Most levels have an optional platforming challenge that rewards you with some treasure or a rare weapon, but a missed jump can easily result in your death, so they’re very risky. 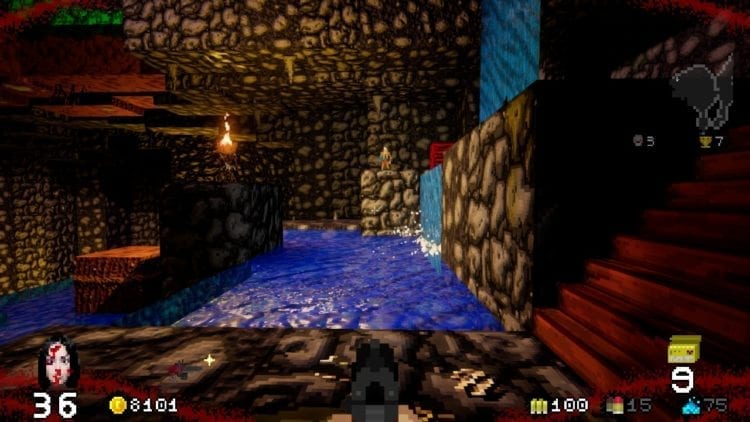 Nightmare Reaper is a pure 2.5d game. Everything is a sprite, but the environments are shiny and reflect a lot of light and can readily look wet. It’s kind of weird seeing modern touches applied to retro visuals, but it’s pretty cool. What I didn’t like so much were the level aesthetics. Everything is really boxy and looks a bit like Minecraft. Compared to a game such as the first Hexen which ran on the Doom engine, the environments can look a little rough. And not only are the enemy sprites underwhelming, but I found many of the sprites to be similar. The work isn’t bad, per se, but it has a janky quality that I’m not quite sure benefits the overall atmosphere.

It’s worth mentioning that Nightmare Reaper ran terribly. Despite this being a 2.5d game, it’s horribly-optimized. I had to turn all of the settings down in order to get the game to run better, but even then I’d still get constant massive frame drops. These would happen if I kicked a barrel, fired a gun, blew an enemy up, jumped or anything really. I even died several times because the framerate took a nosedive. I’m sure the dev will improve this ASAP, but it definitely marred my experience with the game. I also got stuck in a platform once and had to exit the game and restart with all of my level progress gone.

Nightmare Reaper has a lot going for it but still needs a lot of work. The gameplay loop and the gunplay make for a really strong base that I’m sure the dev will build on with time. Even though only 1/3rd of the game is available, this first episode is longer than many of the full-length FPS games it takes inspiration from. I’m very much looking forward to seeing how the game progresses and am especially eager to play some more when the performance issues are ironed out.

Borderlands 3 will have cross-play, but not at launch