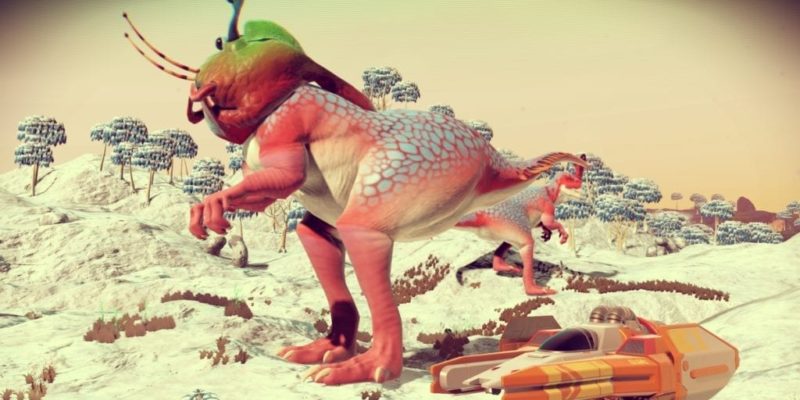 A new trailer for the soon to be released No Man’s Sky Beyond update was released today. In it, we see a few of the features that Hello Games has been teasing us with since Beyond’s announcement back in March. We’ve known that the team has been aiming to include things such as Virtual Reality support, but this new trailer shows us a bit more of what we can expect in next week’s update.

Without a doubt, the most exciting reveal in this trailer is the ability to ride many (maybe even all) of the animals native to the planets that we’re exploring. In this trailer, we see a fellow explorer riding a bipedal creature as well as a player who seems dangerously close to being bucked off some kind of boar-turtle hybrid. Players have previously been able to interact with creatures and collect their poop (you know, for science), so this seems like the logical next step.

Saddle up to watch the animal wrangling and more in the Beyond update’s launch trailer below.

No Man’s Sky is reaching Beyond expectations

No Man’s Sky Beyond, touted as the biggest update that Hello Games has released for the game to date, will release Aug. 14. With it comes a plethora of new gameplay features as well as a handful of fan-requested additions. VR support will finally be included in the game. Players who own No Man’s Sky on either Steam or PlayStation 4 can really immerse themselves into the world by strapping on their Steam VR or PSVR headset respectively.

Beyond will also contain “enhanced multiplayer” features, but there aren’t a ton of details on the specifics of this. No Man’s Sky‘s website does mention that VR will work seamlessly with all components of the game, instead of functioning as its own separate mode.

“Virtual Reality is cool and a major undertaking for a procedurally generated universe, but virtual reality becomes all the more enjoyable and immersive when you’re playing with friends, be they VR players or not.

Bringing the social multiplayer enhancements we wanted to make together with VR seemed not only desirable and natural but unstoppable.” -Sean Murray, No Man’s Sky website

No Man’s Sky owners will be able to download the Beyond update for free on Aug. 14.

By Kevin Foley13 mins ago
Hardware

By Michael Feghali45 mins ago
Hardware