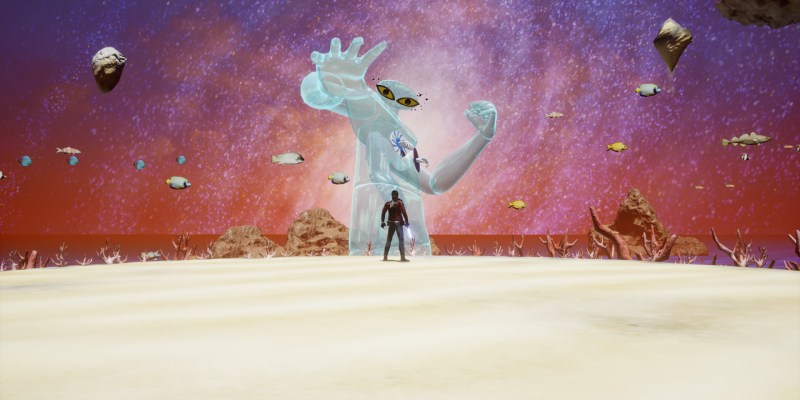 I’m not the biggest Suda51 fan. I think most of his games are style over substance with nonsensical stories that lean more on pop culture references than memorable characters or impactful situations. They’re kind of like the video game versions of Robert Rodriguez movies. But I always thought the gameplay and general structure of the No More Heroes series made for a good time, making them Suda’s best games. While the No More Heroes 3 port is miles better than the rushed PC versions of its predecessors, this is probably the worst game in the series, barring Travis Strikes Again. It’s still pretty fun, though, provided you want to go killing with Travis once more.

No More Heroes 3 won’t win any awards in the story department. The game offers a very clear plot — Damon Riccitiello (the renamed Damon Ricotello from Travis Strikes Again) befriended a small alien named Fu, which you learn in the game’s animated opening sequence. It’s obviously meant to evoke E.T. Years later, Fu, who is actually a prince from another planet, returns with nine alien friends that all broke out of space jail. Naturally, he wants to conquer Earth.

For whatever reason, Earth doesn’t really fight back. Instead, the UAA randomly decides that Travis needs to fight these 10 aliens as if they were ranked assassins. It’s a wild premise, and the story mostly tries to forget about it. Half of the aliens get offed before you can even fight them, which makes the story setup seem more like a joke than anything else. The cutscenes are typical of Suda51: cringe-inducing characters with ridiculous designs have random conversations about mundane things. It’s great if you’re into that; if you’re not, it’ll be grating. Thankfully, due to changing times, Travis doesn’t sexually harass a single female character this time around. Progress.

The structure of the No More Heroes games is equally simple. Travis has to do side jobs to collect cash in order to pay an entrance fee to fight a higher-ranked assassin. In the first game, there was an open map to drive around in. The second game had a menu and a bunch of fun mini-games. This one mixes the two. There are now five open maps, and you need to drive to icons on them to complete battles or minigames and make cash. One very important ingredient is missing, though.

Where are my levels?!

After paying the fee, the previous games had Travis fight through a unique level before facing the ranked assassin at the end. It was solid, and it worked. No More Heroes 3 throws this out the window, having you complete three designated matches instead. These are fights against enemies that usually don’t take more than a few minutes apiece. After completing the fights you can pay the entry fee and a portal shows up that teleports you directly to the boss fight. There are technically two levels included here, one for the intro and another for one of the ranked assassins, but the rest of the bosses have nothing but padding to build them up.

Designated matches are not a good substitute for actual levels. No More Heroes 3 ends up feeling padded, redundant, and somewhat meaningless. I suppose you could consider the maps as replacements for the levels, but they’re really just spaces for the minigames and other side activities to sit in. You drive around on Travis’s bike, which doesn’t really control all that well, while using the game’s nearly useless minimap to get your bearings. There are plenty of said minigames and collectible-type things to find, but the game still ends up feeling like it’s missing something. It bizarrely makes no effort to organize the side content, making No More Heroes 3 a giant pain to try to 100%. Some of the minigames are also terrible, which doesn’t help.

There are some familiar minigames. Trash collection and lawnmowing return from the first game. The former is worse, the latter is better. The racing missions where you’re chasing down enemy cars are the best ones, while the mining missions are horrible. Not only can you only take three hits before you die, but you have to find WESN to mine and then return to your starting point on a timer. And the levels are randomly generated mazes, so finding your way back is easier said than done. It doesn’t help that you can easily fall in the lava that’s everywhere (or get knocked in by enemies or lava spouts) which will cause you to fail instantly. There’s another minigame where you shoot giant crocodiles with a tank cannon and those are okay. You’ll also find defensive missions around the map which task you with fighting waves of enemies. They’re just longer versions of the designated matches, though.

The saving grace is that combat in No More Heroes 3 is still pretty fun, albeit simplistic. Skills similar to the ones from Travis Strikes Again make another appearance here and range from brokenly powerful to borderline useless. Travis can slow down time in an area, do persistent damage to foes in an area, kick enemies to knock them down, or shove them out of the way. These all recharge as you hit foes, so it’s a good idea to use them regularly. Travis also has a light attack, a heavy attack, and can dodge out of the way. If he dodges at the right time, time will slow down for a bit afterward.

You still need to charge Travis’s beam katana, which is something that is way less interesting without motion controls. Similarly, when you deal a killing blow, you have to point the right analog stick in a specific direction to dispatch a foe. This is also not as interesting without motion controls. But, again, I enjoyed the combat, and there’s a good amount of variety among the enemies. However, the over-the-top alien designs aren’t as compelling as the themed enemies from the first two games. Travis can now craft mostly useless chips to equip for slight bonuses, and you’ll get two types of currency for completing things — one of which is used to upgrade abilities.

I mostly enjoyed No More Heroes 3 for what it was, as everything works well enough, but it’s not enough to stop the game from coming up light next to its forebears. This goes for the bosses too, which are mostly simple, short, and easy. The villain is dispatched in a quick-time event followed by a joke battle, so that doesn’t help either. Then everything ends with a cliffhanger, so we’ll probably be getting a fourth game. I’m all right with this, but actual levels need to come back.

As far as the port goes, you can configure No More Heroes 3‘s options in the game, plus you can play at high framerates. The only issue I found is that VSync doesn’t work, but this is far and away a better port than the last two games got on the platform. You can even use your mouse and keyboard to control it. Despite all of this, however, No More Heroes 3 is a pretty ugly game that doesn’t necessarily look all that much better than the original, which kind of shocked me. I’d blame the Switch for being so underpowered if Monster Hunter Rise didn’t look fine.

While pretty fun on its own merits, No More Heroes 3 is noticeably lighter on actual content than previous games.