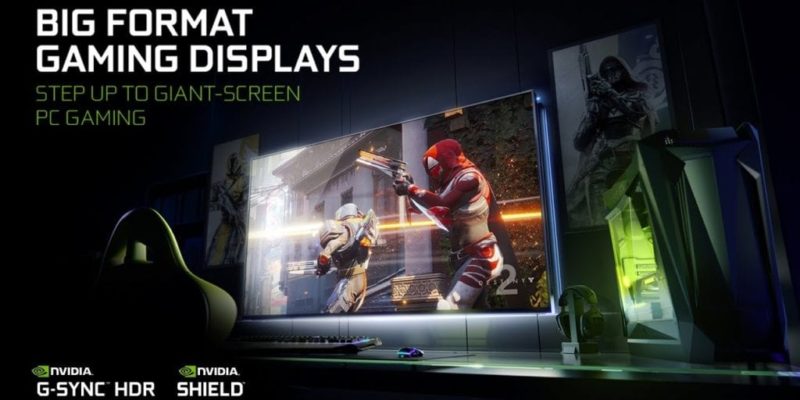 Fed up with that small monitor? Nvidia is ready to go big with the BFGD (Big Format Gaming Display). A 65″ screen is planned for release later this year and they will come with built-in Shield streaming.

“PC gamers expect high performance and instant response times, but, until now, they’ve been largely limited to traditional desktop displays,” said Matt Wuebbling, head of GeForce marketing at NVIDIA. “BFGDs change that. With NVIDIA’s latest technology built into these new displays, PC gamers can now experience their favorite titles in all the low-latency glory they deserve.”

ACER, ASUS and HP are all planning to release these 4K giants with 120Hz G-SYNC support but be prepared to empty the wallet because they will not be cheap.

At the heart of BFGDs is the latest G-SYNC HDR technology that synchronizes the display’s 120Hz refresh rate to that of the game at every moment in time. This G-SYNC Variable Refresh Rate technology delivers a highly responsive, smooth, tear-free, immersive gaming experience unmatched by any display of this size.

Ultra-Low Latency Gaming
Nothing is more important to gamers than responsive gameplay. G-SYNC technology brings the ultra-low latency found in G-SYNC desktop gaming monitors to the BFGD when gaming directly on the PC, Android™, another console or using NVIDIA GameStream™ technology from a desktop or laptop gaming PC.

Big Screen Streaming
The integration of the Android TV™-based SHIELD into BFGDs allows gamers to easily switch between gaming and other forms of entertainment. The bundled SHIELD remote and game controller allow for easy navigation and access to all of the world’s biggest streaming apps, including Netflix, Amazon Video, YouTube™ and Hulu.

With support for the Google Assistant, the entire experience can be controlled simply by using your voice. G-SYNC HDR technology also supports video playback at native framerates, including popular 23.976, 24 and 25 FPS formats. This matches the screen’s refresh rate to the video source’s actual frame rate, eliminating interpolation and presenting the video content as it was intended to be viewed by the director.