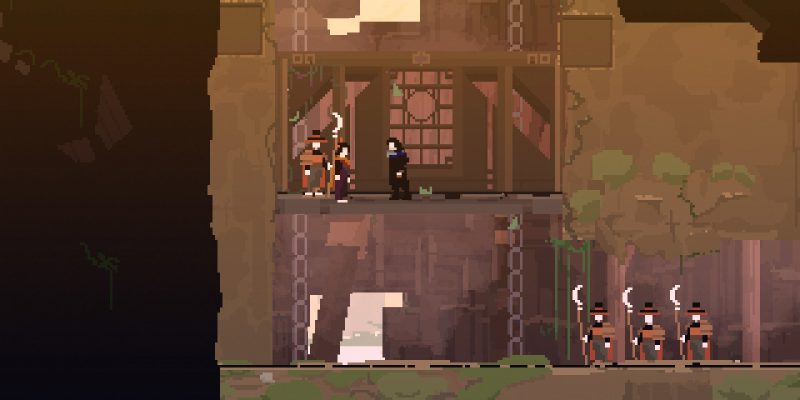 There’s something beautiful about pixel art. I especially like a specific era of it from the early 90’s that combined a minimalist aesthetic with a sort of bleakness. Olija looks and feels a fair bit like the games from that era. But where those games were often cinematic platformers that thrust players into excruciating gauntlets that could only be solved via trial and error, Olija is deftly-paced and characterized by swift, punchy combat. It’s the rare game that perfectly evokes the feeling of a certain style without falling into its traps while simultaneously doing something unique in the process. It doesn’t last for long but it left quite the impression on me.

Olija is the tale of a man named Faraday who sets sail with his crew. Shortly after, disaster strikes and their ship is destroyed, the scattered vestiges of the group now cast away in a land called Terraphage. Sounds pleasant. There, Faraday and the others put together a home for castaways known as Oaktide. While exploring, Faraday comes across a mystical harpoon with the ability to teleport itself to its owner or vice versa and he uses it to rescue a woman of some great import (so much that the game is named after her) from the clutches of an evil being known as Rottenwood.

The game’s setup is straightforward yet effective. Faraday wants to lead his crew back home. But the only way to return is through the Shadowgate, which requires three blue keys. He must travel throughout Terraphage while contending with Rottenwood’s forces in order to secure these so that he may finally make his escape and return home. There are a multitude of lush, voiced pixel-animated cutscenes that bring with them a sense of dread. Olija isn’t a horror game, but its tone can be disturbing. Terraphage is unsettling, and there’s always the sense that something amiss lurks behind every facet of the game’s world. It’s greatly worth experiencing. 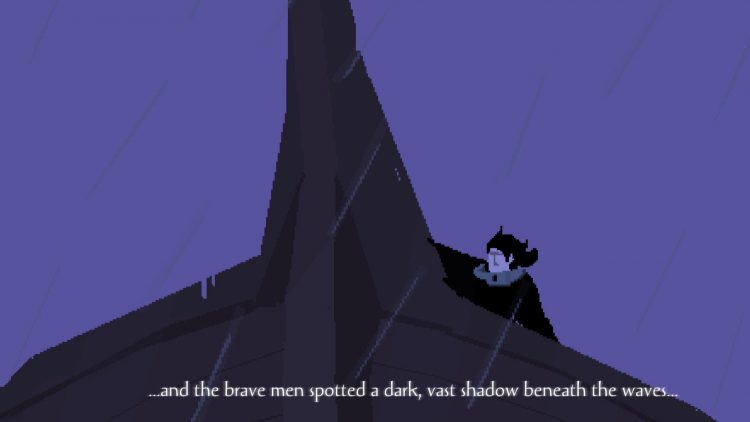 At war with a thousand eyes

Oaktide acts as a hub for all traveling in Olija. At first, Faraday will simply be given a map to his first destination. From there, he checks in with the boatman and picks from available locations on the game’s world map. This allows him to travel to each subsequent area. Once he makes landfall, it’s a simple matter of exploring the area to find the way forward. The game has a couple of different collectible types and there are castaways in cages to rescue, so there are reasons to explore beyond looking for the exits.

Progression in these areas typically hinges on the use of the harpoon to get around. The harpoon is Faraday’s most important item and doubles as his primary weapon and means of getting around. As it’s a harpoon, it can be thrown wherever you need it and it sticks in enemies and certain objects that exist solely to increase the ease of your movement. Once the harpoon is lodged in something, Faraday can then teleport to it. Similarly, if any harpoon throws miss their mark, it can be instantly recalled.

Exploring Olija‘s areas is highly enjoyable, as the level design is strong in addition to being compelling and moody. Faraday will often have to enter long-forgotten caves overrun with the twisted leavings of Rottenwood’s clan. Thick, black masses covered in eyeballs can be found amidst the old destruction. Later in the game, Faraday gets a sword that functions as the opposite of the harpoon, which changes up the level design. This sword can be stuck in the ground and teleported back to. 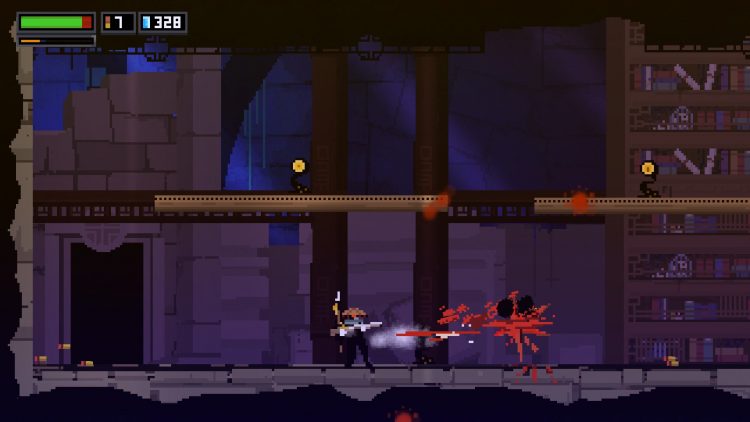 An explosion of gristle

As Olija is roughly four hours long, it would make sense for the combat to be scaled back to some degree. The developer didn’t care about that and put in the extra effort anyway because this is an extra effort kind of game. The harpoon is Faraday’s main weapon, as previously mentioned, but he also gets sub-weapons. Namely, a sword (not the teleporty one, you can’t fight with that) and a gun. The harpoon is a medium speed weapon with a fair amount of reach. Faraday combos his foes with ease and the harpoon has different actions based on if you’re holding any directional input. There’s a surprising amount of weight to the fighting. Enemies respond believably to weapon strikes and often go flying across the screen. Harpoon strikes also have a lot of weight to them.

Even though the sword sub-weapon seems like it’d be limited due to not being the main weapon, it isn’t. It’s faster than the harpoon by a wide margin, doing smaller amounts of damage at high speeds with its own set of fluid animations. They’re both equally usable, and I had fun no matter how I was striking my foes. Either way, enemies explode into a bloody mess when you dispatch them. Olija doesn’t go out of its way to be a gory game but the act of killing things is heavily visceral. The harpoon’s teleport abilities are also useful during combat. Say an enemy is a way’s away. Just throw the harpoon at them, teleport to them, and then eviscerate them. The gun is useful as well, as it does a good amount of damage, and you’ll be able to craft ammo with ease.

The only customization in Olija comes in the form of the game’s power-ups. Which are hats. It’s a silly choice for such a severe atmosphere but the game is so weird anyway that it just works. There are crafting materials dropped by foes and found in containers in addition to a blue gem that acts as currency. The crafting materials and currency can be used to craft hats with different effects. There’s a bar filled via combat that unleashes a specific ability when it reaches its maximum. My favorite is an oni mask that makes the harpoon spin rapidly like a saw, but there are also hats that heal you a bit, or shoot red feathers at foes. The game even has a few boss battles, a couple of which are reasonably tough, even if the final boss is rather simple. Although, I like it when final bosses are simple. Currency can also be used to purchase health powerups or send another castaway to look for crafting materials. 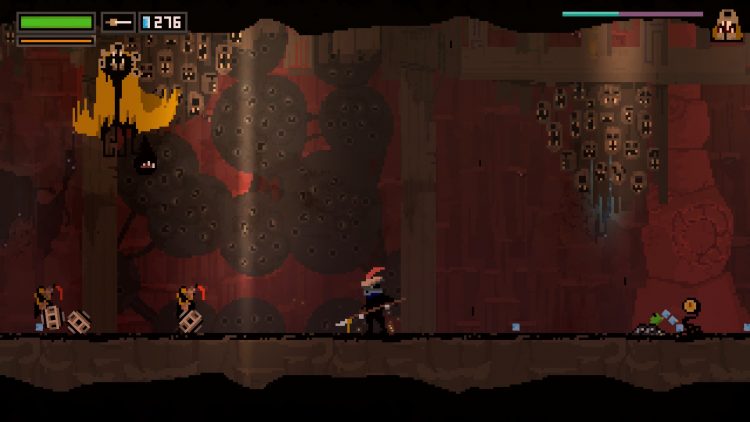 Even though Olija is only four-to-five hours long, I don’t feel that it’s too short. The pacing felt just right to me and I liked the distinct lack of padding. The game’s atmosphere is bizarre yet endearing, which is saying something due to how oppressive it can feel. The pixel artwork is gorgeous, the combat is superlative, and the level design is superb. Players who enjoy short, cinematic adventures will likely get a fair amount of enjoyment out of the game. I do wish I got to use that oni mask a bit more, though. 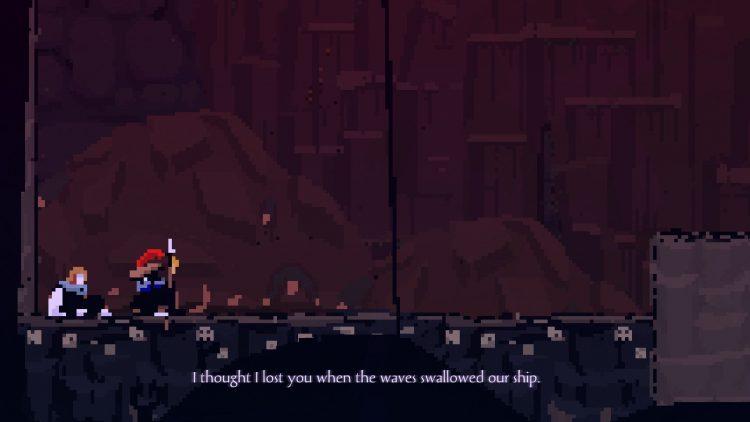 Olija is a unique, intriguing adventure that brings players to a strange land. It isn't long but its length is enough. The visuals and atmosphere are first-rate, as are the combat and level design. All of that makes it an easy game to recommend.

Where to find the Fortnite crashed plane’s black box

By Joshua Chu8 hours ago
Reviews