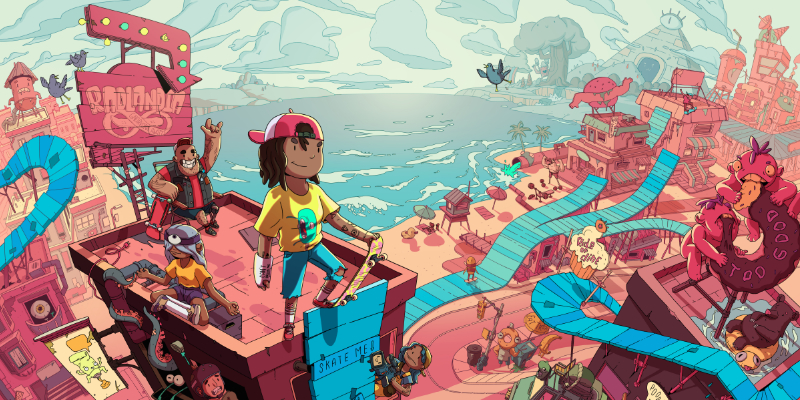 OlliOlli World is the latest installment in Roll7’s side-scrolling skateboarding series. Making its first appearance in 2014, OlliOlli was an instant hit despite being made by just five people. Several years later the studio has grown and its goals have gotten more ambitious with World being the series’ most complete entry to date.

The story tells the tale of how our upcoming and promising skater earns the right to enter Gnarvana, the sacred land on which the five skating gods of Radlandia reside. Only the chosen Skate Wizard has the right to freely communicate with the gods, but Chiffon the current wizard is eyeing up retirement. She needs a replacement and believes that you could be the skater for the job.

The last entry in the series OlliOlli2: Welcome to Olliwood released back in 2015, so Roll7 has had plenty of time to develop OlliOlli World. That time shows with how this installment improves just about everything found in the previous two games.

No change is more obvious than the shift in art style. While the first two games were strictly two-dimensional, OlliOlli World transitions to a 2.5D perspective instead. Levels have more depth to them, with multiple routes being offered. You can transition into the background or foreground of most stages, which is necessary to earn enough points to perfect levels. 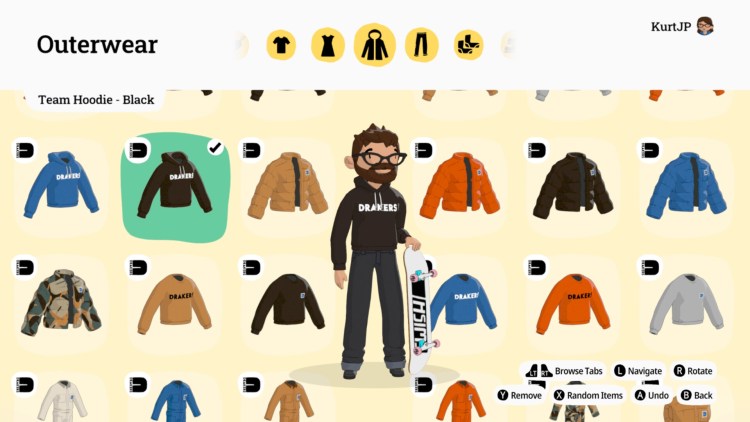 Although perfection is by no means necessary. Outright failure is neither as common nor as punishing as it was in previous installments. The regular checkpoints and the option to take an easier route have helped make OlliOlli World a much more accessible game. Of course, those looking to challenge themselves still have the opportunity to maximize their score and unlock exclusive cosmetics.

Speaking of cosmetics, OlliOlli World features a surprisingly detailed character customization. There are hundreds of options to change your facial features, skin color, clothing, and much more. Rather than just offering a generic insert character, OlliOlli World makes an effort to provide you with the tools to become anything you want. That’s something I can appreciate, as it would have been easy enough for the developers to take the quick way out and only have a couple of preset options.

Accessibility and customization are nice but they don’t mean much if the gameplay itself falls short. Thankfully, OlliOlli World doesn’t just feature the best gameplay in the series, but also some of the best of any skateboarding game to date. Even the finest Tony Hawk’s games from the 2000s are at risk of being dethroned with this newcomer on the block.

OlliOlli World has a huge variety of tricks that you can perform, including ollies, grinds, kickflips, and grabs. Individually, these are all well implemented but it’s how they come together that’s impressive. Each trick, when performed seamlessly, transitions into the next, which is noteworthy given the limitations of skating in a 2D environment. 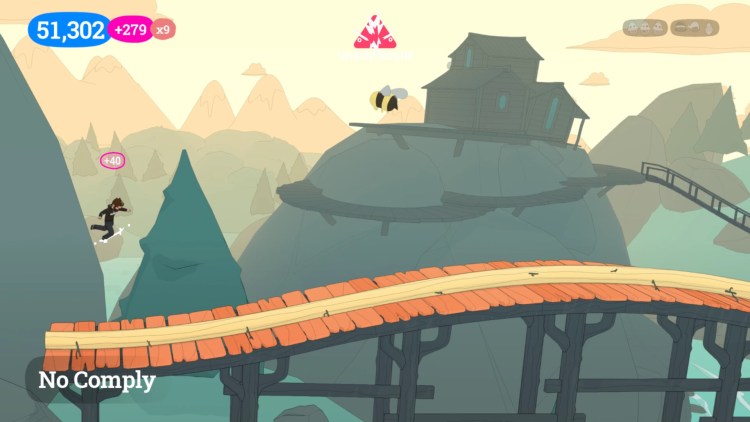 The side-on perspective doesn’t offer an opportunity for any lateral movement, however. You can only go forward, back, up, or down. This inherently gives the player less to work with and should theoretically limit what can be done. And yet, the skating in OlliOlli World feels incredible and can be very rewarding for those who master it.

This is probably due to OlliOlli World’s mix of slick controls and stellar-level design. I always believe that if you’re going to create a game with a large skill ceiling, it’s imperative that the player has as much control as possible. OlliOlli World stays true to that philosophy by making sure that any failure is the player’s fault and not the game’s. It’s always possible to figure out where you went wrong and make the appropriate changes. Because of this, I find that failing in the game motivates me to want to go again and improve, rather than causing me to feel frustrated at my shortcomings. 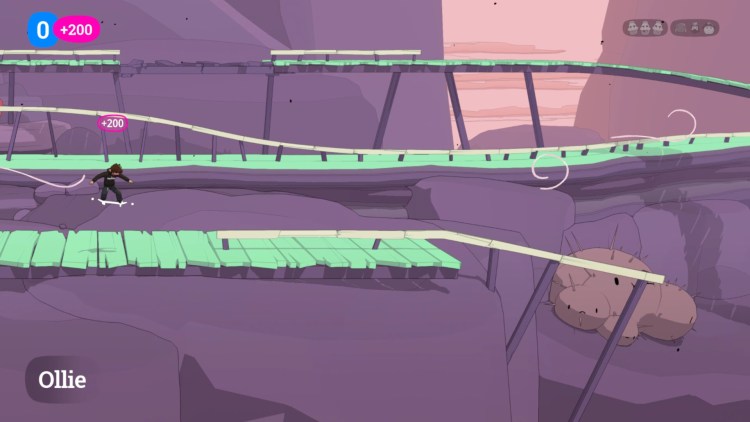 Although it isn’t a deal-breaker, I have to concede I am not overly keen on the soundtrack. I can see what the developers were going for, with a variety of indie instrumental music, but I found it forgettable. It doesn’t detract much from the superb gameplay but the skateboarding sub-genre has always been known for its kick-ass music. Some credit is due, though, for the choice to use indie music. It provides players with the opportunity to discover new artists that may appeal to them more than they did to me.

It isn’t just the creative decisions made that make OlliOlli World feel so good. Its flawless optimization plays an essential role, too. Those with mid-tier gaming PCs can expect frame rates that stay well into the hundreds. On an RTX 2060 at 1440p, drops below 300 FPS were extremely rare both in the menus and during gameplay. This is fantastic for taking advantage of the higher refresh rates present on many gaming monitors.

Although, you hardly need a ray tracing approved graphics card to run OlliOlli World. You can still reach perfectly playable frame rates with budget cards like the Nvidia GTX 550 Ti. Given that Olli Olli World is a 2D game, it’s easy to take something like this for granted, but I have played many, less impressive-looking titles that didn’t perform half as well. It’s clear to me that Roll7 has taken its time making sure its fans got the best-made product possible. 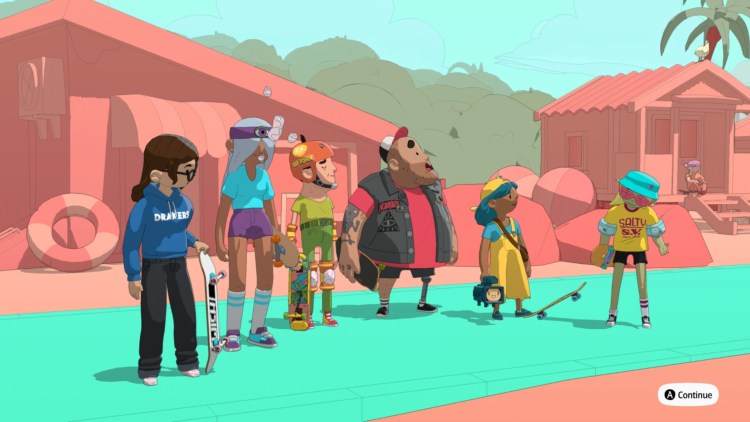 The positive vibes continue with OlliOlli World‘s visual presentation. The new cartoon-inspired visuals have a lot more life to them than the pixel art from the first two games. Both are nice in their own right but the original OlliOlli looks like just about every other indie game on the market. It was presentable but failed to stand out from the crowd.

In contrast, OlliOlli World oozes style with its vibrant world and gorgeous pastel color scheme. It’s rare for a 2D game to make me stop and appreciate what I’m looking at. That’s an honor usually exclusive to AAA open-world games that have gorgeous and complex 3D environments to fall back on. Being able to lure out that desire in an indie 2D skateboarding game, of all things, is amazing.

If it isn’t obvious by now, I really like OlliOlli World. It is a wonderful skateboarding game that takes the core ideas and successes if its predecessors while adding content and amending their presentation issues. Furthermore, the improvements to accessibility guarantee that this is a game anyone can enjoy regardless of the situation they’re in.

Even though I’m not a fan of the music, that is a minor issue when everything else is taken into account. Whether you’re most interested in OlliOlli World‘s visuals or gameplay, it delivers a world-class performance on both fronts. This is the kind of indie game that could easily become a staple in Steam libraries in the coming years. Anyone with even the vaguest interest in skateboarding games would be doing themselves a disservice not trying this out.

OlliOlli World is a wonderful skateboarding game that delivers everything I could have ever wanted. Its gorgeous pastel color art, flawless optimization, and slick controls combine to create a premier indie game.

Battlefield 2042’s scoreboard update has been delayed to March