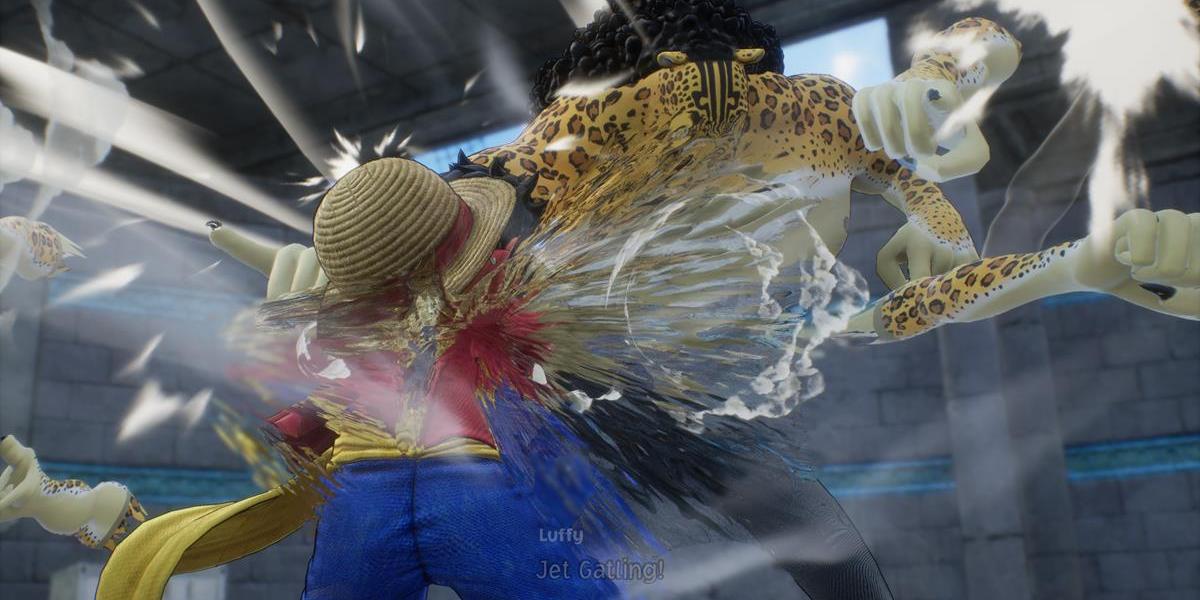 I’m a One Piece fanboy to the point that it’s difficult for me to review this game. This job requires me to review One Piece Odyssey purely as a game, but as a fan, I could spend thousands of words rambling about how I found the premise and narrative choices aggravating and unsatisfying. But I’m not going to do that; I’m settling for hundreds of words instead. The franchise isn’t really known for pumping out quality games, however Odyssey is a good JRPG. It’s got a lot of content, a unique battle system that mostly plays to the series’ strengths, plus it has more voice-acted dialogue than other series game. Yohohoho!

During the game’s first few hours, I assumed it was basically a turn-based version of Unlimited Adventure. I imagined I would explore the island and experience a purely original story take place. One Piece Odyssey kicks things off with an opening we’ve seen in One Piece games before. The Sunny (the Strawhat Pirates’ ship) gets shipwrecked and the crew finds itself on a mysterious island called Waford. There, they find some mysteries, new characters; a (seemingly) brand new adventure waiting for them. The Strawhats are accosted by a young woman named Lim who turns their abilities into cubes and flings them across the island, leaving the crew weak and powerless at level one.

It’s a solid way to give a turn-based RPG a real sense of progression. The first four hours were spent taking in all this information, coming to grips with the combat, and exploring some ruins before fighting a giant boss. But then the rug was pulled out from underneath me. The majority of the time spent in One Piece Odyssey takes place in Memoria, which is a location that Lim leads the crew to. There, they’ll revisit four past arcs of the anime series. When I initially made it to Alabasta, I hoped it would finish quickly and let me back onto the island. By the time I beat Crocodile (again) and returned to Waford, nine real-time hours had passed. 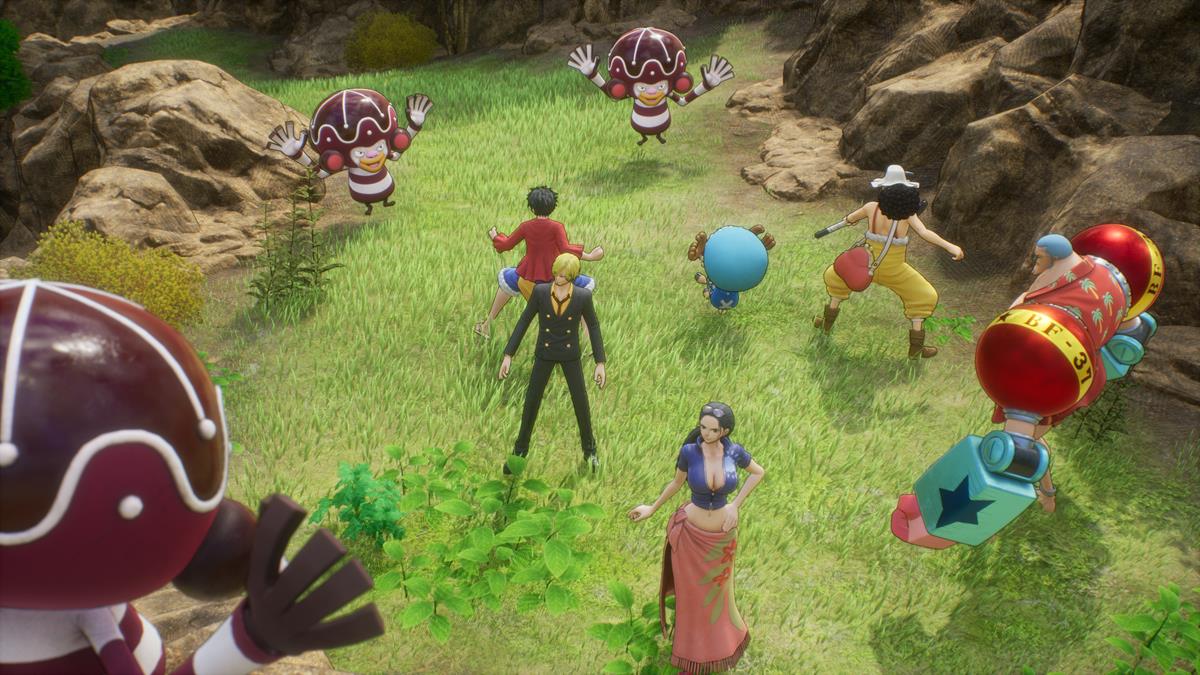 I strongly wish the game went a different way. One Piece Odyssey‘s narrative practically evaporates every time you step into Memoria, which has a memory simulation of Alabasta, Water Seven/Enies Lobby, Marineford, and Dressrosa. The game would have to take place right after they leave Dressrosa, so it’s weird that they’d be forced to revisit their memories of it so soon after. At any rate, it’s all a simulation. The people you meet and the places you go aren’t the real deal, so, narratively, it feels like the wheels are spinning.

And the game doesn’t even come close to making the most of this. The premise is weak, sure, but there was still the option to try to adhere closely to the manga’s story and present these arcs in a way that would give players the warm and fuzzies again. Alternatively, the writers could have had some fun with the idea and presented us with new permutations. Instead, it’s mostly unimaginative and packed with filler.

The Alabasta section is hours of the crew traveling to try and find Crocodile. At one point, they go into a cave to make it to Rain Dinners, only for Luffy to break the exit. You then have to walk out of the cave. What did you fight your way through it for? Nothing. And there are plenty of times you’ll simply walk to a marker, watch a scene, walk to another marker, watch another scene, and then be told to backtrack to where you started from. It can really feel like the game is padding itself out.

This isn’t what I wanted and, frankly, it isn’t what should have been done. On the other hand, almost all of the important dialogue is fully voiced. The voice cast is just as good as ever, and I always enjoy listening to them bring these characters to life. Even if a couple of characters, namely Franky and Brook, get thrown to the wayside. For instance, Franky doesn’t even technically join the party until over 20 hours into the game when you reach the midway point. Of course, this is all fanboy whinging.

None of this affects the gameplay, really. It’s just disappointing that a production of this magnitude didn’t get a story that benefitted from imaginative changes to the familiar narrative. Plus, there are multiple arcs that would have allowed for more interesting settings. Thriller Bark and Whole Cake Island would have done better than freaking Alabasta and Water Seven. But that’s enough complaining about things not directly related to gameplay. One Piece Odyssey honestly does a respectable job with its general gameplay flow and combat. You’ll have most of the crew in your party at any given time and can swap between them freely in the field where they have different capabilities. Luffy can stretch to grab grapple points, Chopper’s short enough to make it past tight structures, and Zoro can cut iron objects such as crates or gates that block the way. I don’t think any other game has come this close to actually making it feel like you’re controlling the Straw Hat crew.

And that extends to fights. Battles are turn-based and you can have four characters active at once. But the kicker is that you can swap between the whole crew at will as long as the active characters haven’t used their turns. One Piece Odyssey uses a rock-paper-scissors weakness system where characters and enemies are either power, speed, or technique types. Power is strong against speed, speed is strong against technique, and technique is strong against power. You’ll constantly be swapping between different crew members to mop up enemies, as you just won’t do much damage against enemies that aren’t weak to a character’s attacks.

Not all are equal

As you hit enemies with your default strike, that character will gain TP, which allows them to use abilities taken straight from the manga. There are issues with this, though. The amount of TP required for these abilities is badly considered. Luffy and Zoro have great abilities that are cheap and can hit multiple foes with ease. But they’ve got too many abilities that do similar amounts of damage and aren’t different enough to be useful.

Other characters have abilities that are way too expensive, making the overall combat feel imbalanced. Robin really gets the short end of the stick here. For a lengthy portion of the game, she only has four moves and three of them are stupidly expensive. Conversely, Zoro has 10. Robin should not be less useful than Usopp, Nami, and Chopper. They’re the Weak Trio, for crying out loud! What happened to Sanji?

I have to mention that there are some annoyances with the translations. I noticed a few typos and the localizer had some problems with how to write Sanji’s dialogue when he refers to female characters using the “chan” honorific. For the most part, Sanji calling Robin “Robin-chan” will be translated as “my Robin” or “my lovely Robin.” It’s groan-inducing. At one point, they localized “Nami-san” as Sanji saying “Miss Nami.” Sometimes, the localizers will have his “chan” usage just use the character name. It’s inconsistent.

I also need to mention that Sanji is completely out of character when Lim is around, as he treats her in a completely normal way. No sweet-talking, no offering to make her all kinds of food, no telling her how beautiful she is. But he still hits on every single non-Lim female character he comes across. It makes no sense.

But despite my issues with the game, it’s simply a good JRPG. There’s exploration to be done, the combat keeps you on your toes, and it’s great fun to exist in this world even if things could have easily been more compelling. As far as games in the series go, One Piece Odyssey is one of the best if you don’t mind the narrative issues. I wasn’t expecting it, but it ticks all the boxes that a solid JRPG needs. 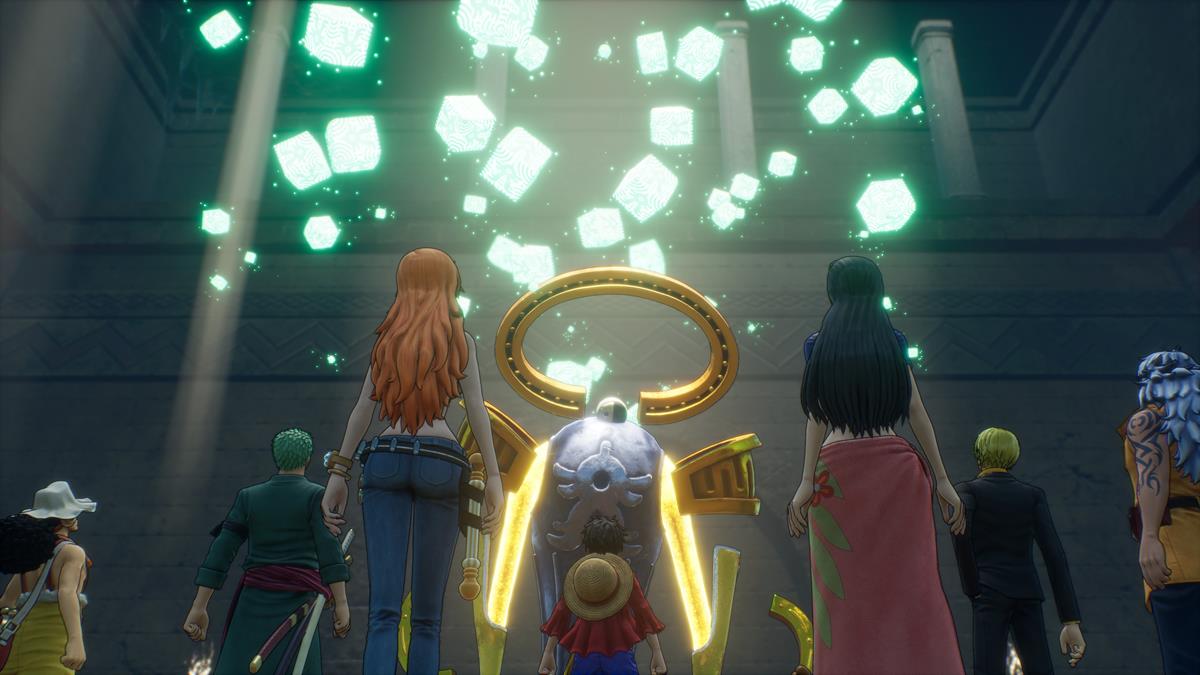 As far as games in the series go, One Piece Odyssey is one of the best if you don't mind the narrative issues. I wasn't expecting it, but it ticks all the boxes that a solid JRPG needs.