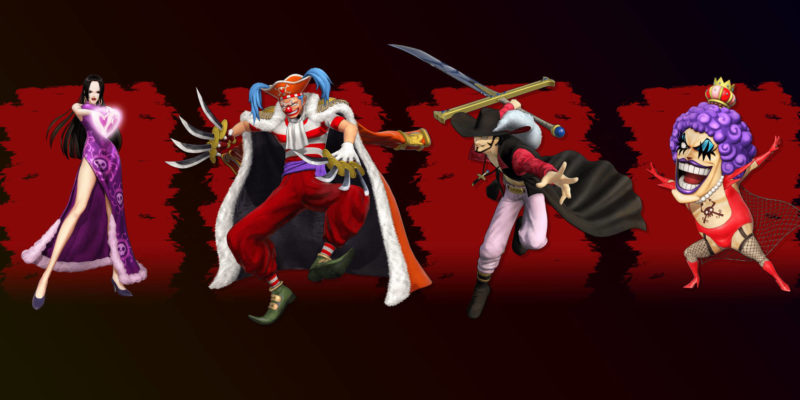 Not one, but four trailers have been released to introduce the new fighters joining the One Piece Pirates Warriors 4 roster. Bandai Namco Entertainment has laid the crazy on thick with its introductions for Dracule Mihawk, Buggy, Boa Hancock, and the incredibly bizarre Emporio Ivankov.

Bandai Namco has said that the action-adventure beat ‘em up One Piece Pirate Warriors 4 will have more than 40 playable characters when it launches on March 27. So, you can expect more trailers with creative combat soon.

Dracule ‘Hawk Eyes’ Mihawk currently holds the title Strongest Swordsman in the World. He wields his large sword with devastating speed and power, laying waste to hordes of enemies with each swing.

Buggy the Star Clown is the captain of the Buggy Pirates. He isn’t the most powerful pirate, but he is a crafty fighter who utilizes an array of tricks during battle. In Buggy’s introduction trailer, you can see his use of the explosive Buggy Ball and his ability to split into numerous pieces and then reform.

Boa Hancock the Snake Princess is the Pirate Empress of Amazon Lily. She is also considered to be the most beautiful woman in the world. Boa Hancock’s main attacks are her incredibly fast and powerful kicks. But she can also turn people into stone by touching them and perform powerful attacks in combination with her snake.

Emporio Ivankov, or Iva for short, is the sometimes male, sometimes female ruler of the Kamabakka Kingdom. It’s 2020, so you can’t assume people’s genders anymore. They are very agile despite their size and incredibly strong. Iva can change from a man to a woman, which completely changes the way they fight.

If you’d like to check out all the fighters currently on the One Piece Pirate Warriors 4 roster, you can do so on the game’s official website. You can now also pre-order the game on Steam to get early access to the Vinsmoke Brothers and two exclusive costumes.