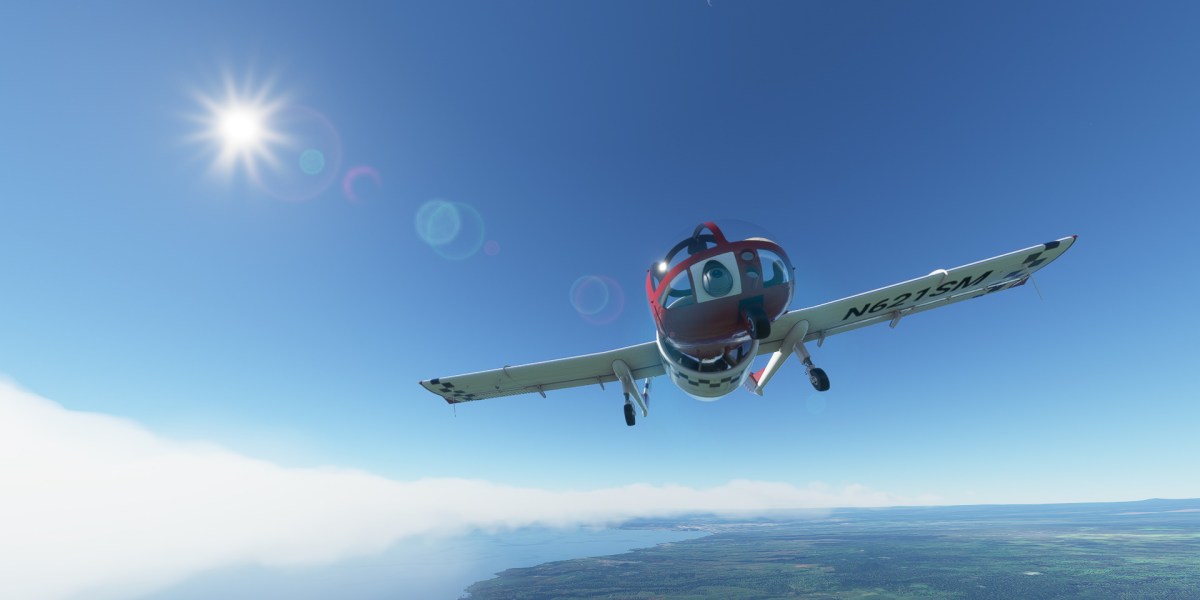 The UK-built EA-7 Edgley Optica inside and out is what you would call an unconventional aircraft. It looks like a chunky dragonfly and flies barely faster than a car drives on a highway. It’s definitely not something you’d often see buzzing through the skies. But, it does have a special use. It does a really good job at aerial photography, and also giving its passengers the coveted birds-eye view perspective. And considering it was built with aerial observation in mind, one would hope that the ORBX rendition of the Optica in the gorgeous Microsoft Flight Simulator nails that use case. Well, I decided to test that by taking it on an equally unconventional test flight.

I’m also trying out Just Flight’s new Piper Turbo Arrow props around the Hawaiian Islands, and the big island of Hawai’i just so happened to be the perfect spot to take out ORBX’s Optica for a spin. What’s so special about this island? It’s home to the striking volcanoes of Mauna Loa and Mauna Kea. And on the top of Mauna Kea are the array of the Mauna Kea Observatories. See where I’m going with this? Aerial camera, meet even bigger aerial camera.

Ascent to the peak

The Mauna Kea Observatories are about 14,000ft above sea level, at the very top of the dormant volcano. The Optica may technically be a plane, but it really is more of a camera with wings, and it flies just like how it sounds. With the EA-7 Edgley Optica’s cruising speed about the same as a Cessna 172 (around 70 knots), ascending the menacing mountain was harder than expected. Its center-mounted internal prop that sits just behind the cockpit has enough thrust to keep it going, but making such a steep climb is not exactly what this plane was designed for. It can go high, just not with speed.

That said, you don’t fly an Optica for speed anyways. It’s the views. And thankfully, Microsoft Flight Simulator has made a name for itself for that reason alone. 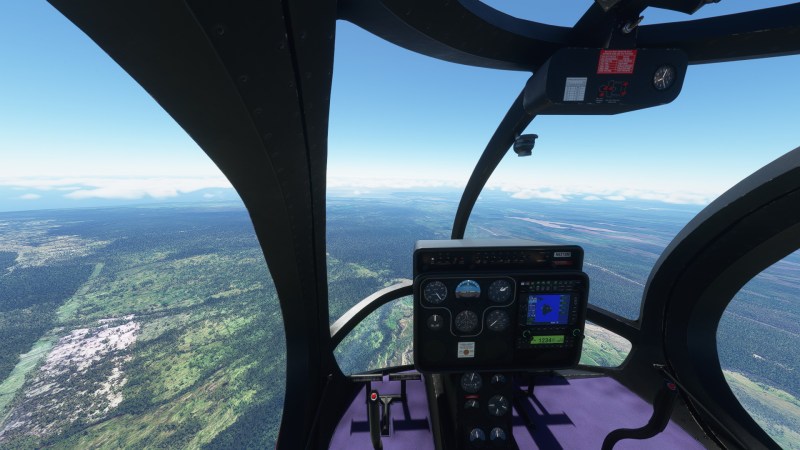 Optica’s bug-eyed shaped dome of a cockpit wasn’t an awkward artistic choice. It’s functional, not fashionable. And it certainly does work well. With a 270-degree field of view, the Optica provides a full-on observational deck to enjoy. If you ever thought the window by your seat in an airplane was too small, then this is literally the antithesis of that. With such a wild field of view, the Optica is best paired with a VR headset, which unfortunately I don’t own. Nevertheless, soaking in the sights of Mauna Kea and the surrounding island was still breathtaking thanks to Microsoft Flight Simulator’s great satellite imagery and powerful graphics engine.

The view only got better once I finally reached the top. The poor plane’s little engine wasn’t doing so hot once it got up to such a high altitude, but it persevered. Buzzing above the giant telescopes below, the resemblances between the large domes and the Optica’s cockpit is simply hilarious. 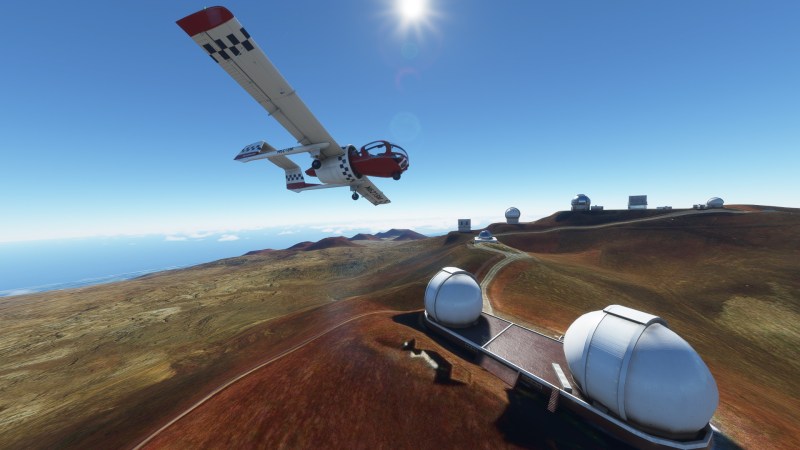 After taking in the sights of the peak of Mauna Kea, I turned back towards the direction of the airport, which is conveniently a straight shot from the peak of the volcano. This allowed me to make use of the altitude I had gained. Inspired by my recent time with Aerosoft’s Glider Simulator, I decided to see how the Optica would behave as an unpowered aircraft. Surprisingly, it didn’t disappoint. While a rapid descent from over 14,000ft back down to sea level wasn’t enough to get the airspeed indicator over 100 knots, the Optica did gracefully make its way back down to the ground at Hilo Airport using just the power of the wind flowing over its wings. I also forgot to mention that Hilo Airport has the very interesting ICAO code of PHTO — if this isn’t a more (accidental) appropriate testing environment, then I don’t know what else is.

Walking away from that test flight, my conclusion is that the ORBX Optica is a great choice for low-and-slow flying in Microsoft Flight Simulator. This game prides itself on VFR flight, especially in VR. These elements make this aircraft feel right at home. The Optica’s only real drawback is the lack of autopilot. You’ll have to keep petting it along the whole way, and seeing that it moves so slow, taking it on long sessions may not be ideal (though it does have decent mileage). I wouldn’t be surprised if community mods eventually outfit it with a more powerful engine and AP capabilities. But as it stands, the base package is definitely a good fit for pilots who are just looking to take in surrounding areas with no visual obstructions. 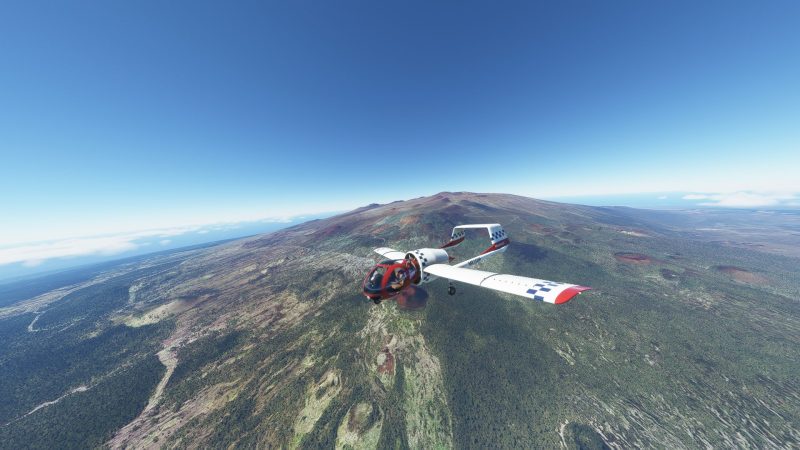 As the first self-produced aircraft from ORBX for Microsoft Flight Simulator, the EA-7 Edgley Optica isn’t so bad as far as first impressions go.

The interior and exterior quality of the model’s details are right up there with that of Asobo. The sounds of the motor also aren’t too bad either (aside from the engine ignition). For $15.47 USD, this is a decent package overall. It’s not going to blow your socks off, but for full VFR flight, particularly those with VR headsets, it’s a good pick-up simply for the visual experience alone. 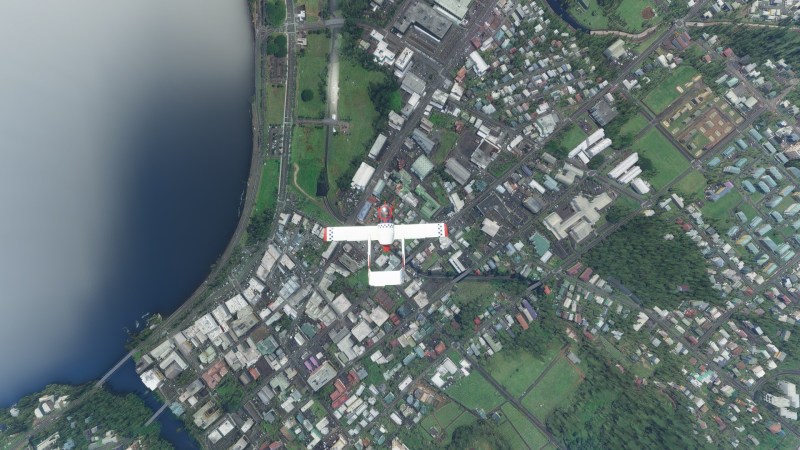 By Matt Henzel13 hours ago
Features