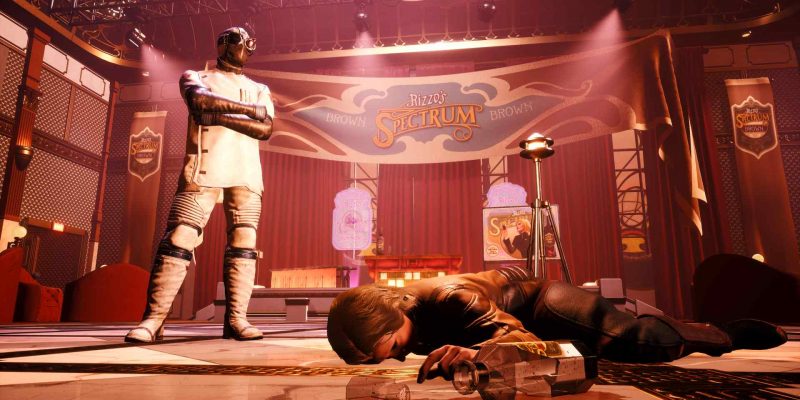 The Outer Worlds: Murder on Eridanos is out to prove once and for all that sugar and booze are indeed bad for your health. This aptly named expansion takes the captain of the Unreliable to the scenic colony of Eridanos, where the rich citizens of Halcyon go to vacation and stay at a giant luxury hotel called The Grand Colonial. It also happens to be the place where the mega-corporation Rizzo develops and manufactures many of its products, which include breakfast cereals, candy, soda, and alcoholic beverages.

You are brought in to investigate the murder of the colony’s biggest celebrity, Halcyon Helen. She was expected to help launch Rizzo’s latest product, Spectrum Vodka Brown, as the official spokesperson at a big launch party. However, her violent death in the hotel’s ballroom delays those plans indefinitely. It becomes clear before you even arrive at Eridanos that you’re going to have your hands full. You must also deal with executives from Rizzo and SubLight Underground (SLUG), which have a begrudging partnership. Along the way, you uncover other mysteries, such as why so many people are disturbingly cheerful and have small appendages growing from their necks.

Investigating the Murder on Eridanos

The expansion keeps the mystery crime solver theme from the previous DLC, Peril on Gorgon. However, it tones down the film noir elements and trades it in for more of an Outer Worlds-styled Sherlock Holmes vibe. There’s a greater emphasis on examining clues and trying to piece together a narrative based on what you discover. But don’t panic if your perception points are low, since the game will still get you through. 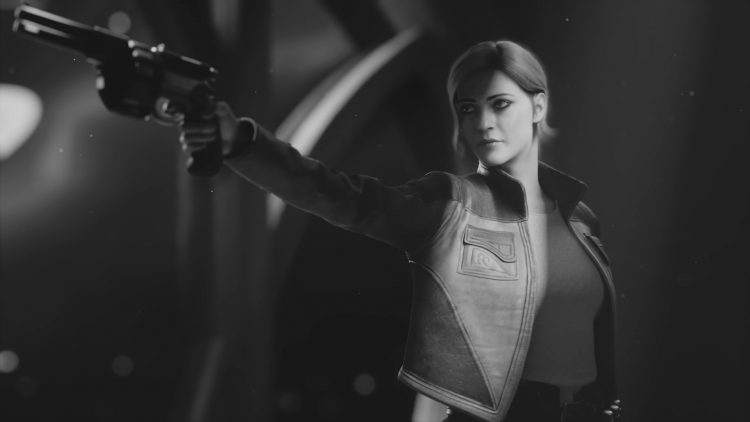 The wealthy colony of Eridanos is a distinct change from Gorgon. Instead of being on a darkened asteroid overrun by crazed marauders, you’re on a small group of interconnected islands floating on the upper layer of a gas giant. While this provides some breathtaking vistas, crossing the long bridges that keep the districts together can be a bit of a slog. All the while, you’re not hitting any random encounters or getting views beyond the gas clouds. Eridanos feel considerably smaller than Gorgon.

You get outfitted with a device called the Discrepancy Amplifier. Technically, it’s a computerized magnifying glass that is said to pierce through time and the veil of reality to reveal things that are out of place — like a set of footprints. The device alerts you when clues are nearby, and the right companions might help make sense of the different clues you uncover. For instance, Parvati can offer some engineering insights. Nyoka is knowledgeable in just about all things alcohol-related. However, the downside is that this feature isn’t apparent if you don’t bring the right people. So, you can end up inexplicably staring at a corpse or open grate with no way to interact with it. 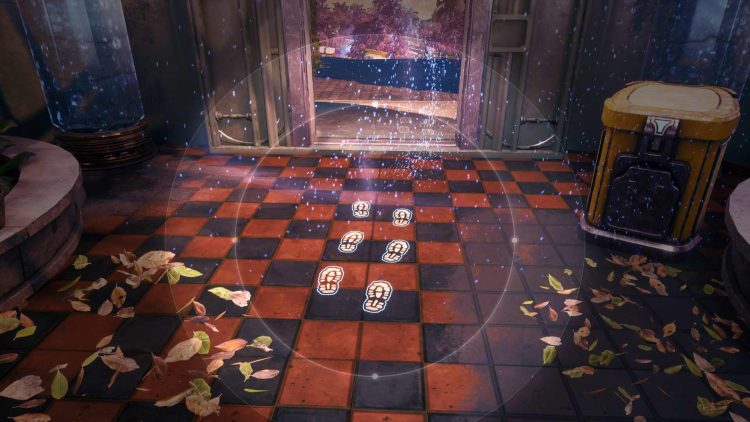 The Discrepancy Amplifier doesn’t add too much to the gameplay, but it does make you a detective who can actually detect things.

Other features include a handful of rare weapons, one or two new creatures, a new variety of crazed human foes, and three extra levels that brings the total to 36 if you also have the previous DLC. Similar to Peril on Gorgon, Murder on Eridanos adds an extra stop-off in the campaign. It takes place after the Radio Free Monarch mission. But doesn’t mess too much with the gameplay formula that lets you shoot, talk, sneak, and hack your way through almost any situation. For those who finished the game, the add-on manipulates time and space by creating a save file that preserves all your equipment while moving you to the point before you go to Tartarus.

True to the Outer Worlds style, you’ll get to meet a host of off-the-wall characters. And you’re free to deal with them however you see fit. Just don’t get too attached to them, because the bodies quickly start to pile up in this paradise. As you move closer to solving the murder, the plot throws plenty of curveballs in your direction as you try to navigate between factions and their different motives. My favorite character ended up being SLUG head Sedrick Kincannon, who politely answered all of my questions. Naturally, with the caveat that I shouldn’t believe a single word he says. It’s that kind of straightforward suspect that I appreciate in a mystery. 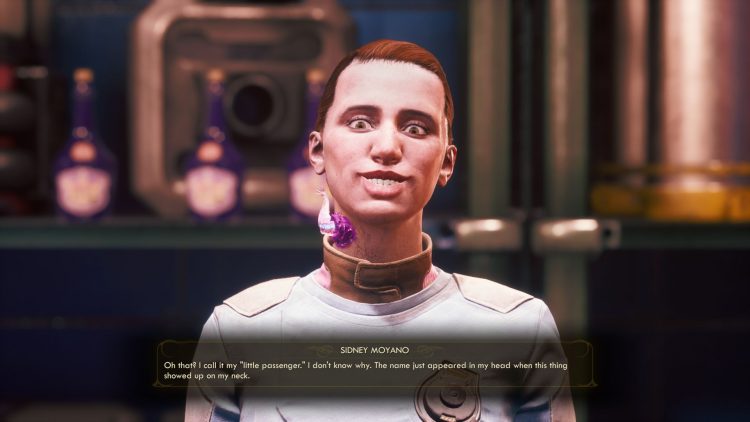 Even with all your medical points, you cannot fix this.

I also love how self-aware the humor can be. At one point, a group of thugs disguised as SLUG guards approached me and said that the company didn’t appreciate that I was investigating Helen’s death and that I should back off. I explained that I could clearly see through their ruse. It would be absurd for the company that hired me to use force to derail the investigation. They could just fire me and put an end to it. Being the kind of snarky person I am, I enjoyed how flustered the leader became before all the shooting started.

It’s almost too bad that Murder on Eridanos is the final story-based expansion for The Outer Worlds. Given how the missions take place entirely on the planet, this expansion has the feel of an extended side quest. It doesn’t offer much more insight into the world of Halcyon beyond what was already known. Peril on Gorgon felt more expansive. It included quests that required you to leave the asteroid, conspiracies that uncovered buried secrets in the colony, and some challenging moral choices. By comparison, you probably wouldn’t miss much by skipping Eridanos unless you’re in the mood for a fun murder mystery. Unless you absolutely need those three extra levels and gear to fully build your character, of course. 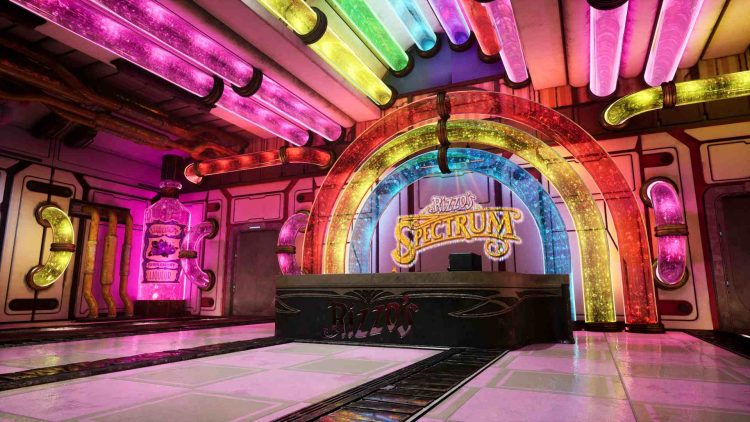 Rizzo’s is one of the more colorful corporations in Halcyon.

Your stay on these luxury floating islands is likely to be a relatively short one. It won’t take long to get through, even if you decide to explore every dialogue tree with every NPC you encounter while looting all the boxes you can find. My fully equipped level 33 character made quick work of the new spit-throwing foes, even as things quickly went insane towards the end. I was able to finish the main story in an afternoon on Hard difficulty. After trekking across Eridanos for the science weapons, there wasn’t much incentive to return. There are only so many chocolate bars and vodka bottles worth stealing before you have to admit that you have a problem. Even as a replay to make different choices, it’s tough to justify spending more time at the resort than you need to.

Still, what the Murder on Eridanos DLC lacks in size, it makes up for in personality. Although there aren’t too many missions, the ones that are there include interesting characters, fun twists, and decisions that could impact the fate of Halcyon. Not to mention, many of the residents are going out with big smiles on their faces.

The Murder on Eridanos DLC expansion doesn't add too much to the Outer Worlds experience, but it has just enough personality and humor to make it worthwhile.

By Logan Broadley8 hours ago
Reviews