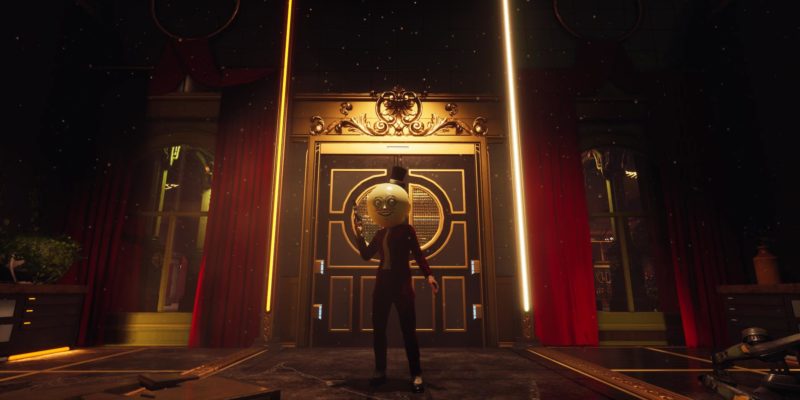 With Peril on Gorgon, the first major DLC expansion for The Outer Worlds, Obsidian Entertainment is leaning hard into film noir territory. Except instead of being a hard-boiled detective who takes in desperate clients, you end up having a conspiracy essentially thrown into your lap, complete with a severed limb attached. Don’t worry though. It’s not yours, nor does it belong to any member of the crew. It’s just a random severed arm.

The DLC becomes accessible soon after completing the “Radio Free Monarch” mission. After speaking with Phineas and making a short trip to a nearby planet, ADA alerted me to an urgent message from the Halcyon Parcel Service (HPS) as its courier ship was docking with The Unreliable. There is a brief but pleasant (by Outer Worlds standards) exchange that ends with the courier depositing something potentially hazardous in my cargo bay. Given how most things in the game tend to be dangerous, I cautiously approached the parcel before opening it and was relieved to discover that it was just a portable phonograph with a bloody arm attached to it. 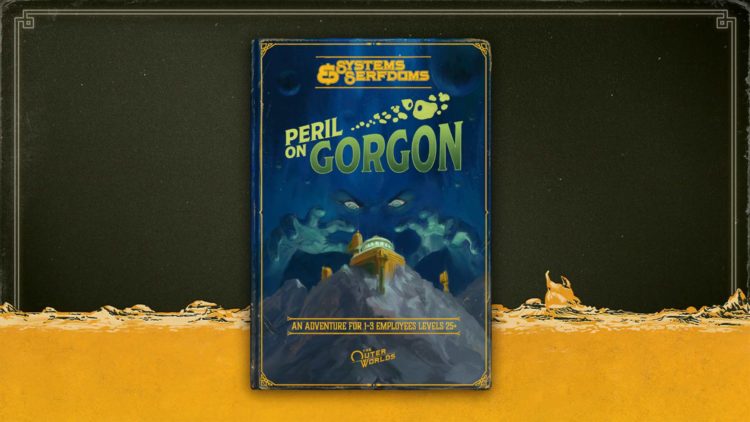 A message to Captain Hawthorne from a Lucky Montoya plays and hints about how his luck may have finally run out – in case I couldn’t tell by the arm. According to ADA, Lucky was the fourth-best freelancer in Halcyon, which is far more impressive than it sounds, considering how the system has thousands of them. As it turns out, he was working a shady job on Gorgon before meeting his demise.

We also learn that Lucky was repaying a favor to Hawthorne by passing on the potentially high-paying job. That’s when we set off for Ambrose Manor, a gigantic mansion located near a massive asteroid known as Gorgon. The asteroid once served as a research and manufacturing center for Spacer’s Choice. Additionally, the corporation produced a performance-enhancing drug called Adrena-Time there. 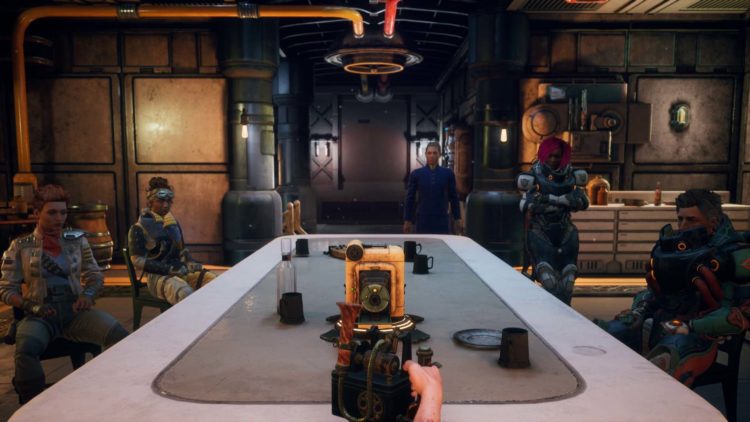 Nobody minds that there’s a severed human arm resting on the food table.

I was greeted by a welcome robot when I arrived at the spaceport. The huge manor was off in the distance, and the robot was surprised to see me because visitors were uncommon. Then it promptly walked off the platform and crashed down below. Being a reasonable freelancer, I put the writhing robot out of its misery and looted it for valuable parts before making my way to the mansion. The mansion itself held a mixture of awe and weirdness in equal measure. For example, outside of the gigantic house is an unchanging Zen garden and a fake saltuna pond where the fish go around in circles on rail tracks. 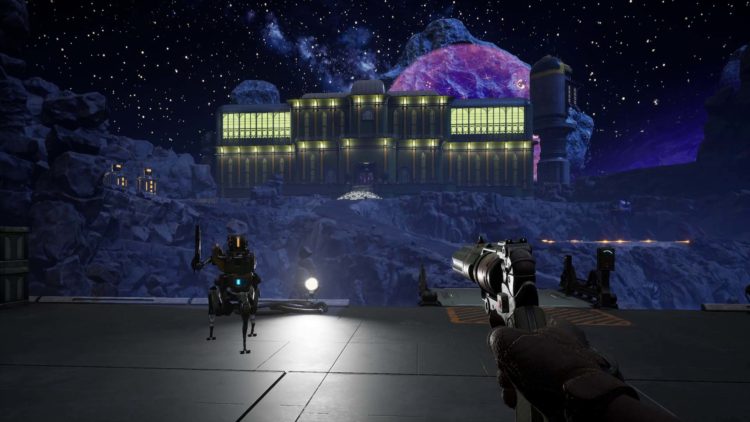 It looks like there’s big bucks in the pharmaceutical business.

Inside wasn’t much different, with robots wandering through a mostly empty space. Apparently, the mansion has been abandoned for quite some time and everything in it went into a state of disrepair. Except for a locked kitchen door and some small rooms, there isn’t a whole lot to explore in the mansion, so I made my way upstairs to meet Wilhelmina (Minnie) Ambrose.

She was staring at Gorgon through a large window and didn’t seem very surprised at having a stranger break into her home, nor the fact that Lucky died while carrying out a job for her, which I suppose is par for the course. Minnie explained her struggle to get her home and inheritance after her mother was left behind on Gorgon when Spacer’s Choice declared an emergency evacuation. Since then, the asteroid became overrun with scavengers, marauders, and escaped animal experiments. However, no one on the surface has been able to penetrate the main research lab’s defenses. 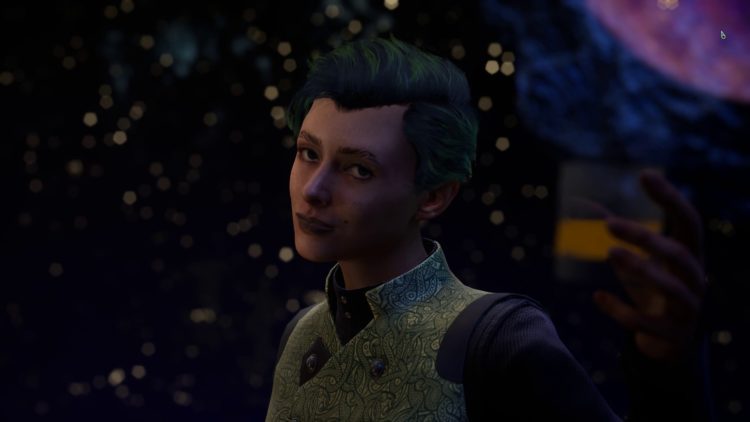 Wilhelmina Ambrose. Something is way off about her, but that’s not unusual in Halcyon.

That’s why she was quick to pass on the job after learning of Lucky’s demise. Whatever happened on Gorgon, it was blamed on her mother in an ongoing smear campaign. But secured at the center of the Spacer’s Choice research facility is her mother’s journal, which could redeem the disgraced Ambrose name, get revenge against the company, and allow Minnie to break back into high society. I’m pretty sure she has an ulterior motive too, but with plenty of intrigue and money to be made, this sounded like the perfect mission, so I naturally took it.

To put things mildly, Gorgon is a total mess. Wilhelmina said that the asteroid was a wreck, but I think she undersold it. It’s clear that the emergency evacuation took a major toll on the area, and the alarm was still blasting nonstop. The fact that the asteroid became a marauder magnet didn’t do it any favors, either. Chatting with the lone trader revealed that there there’s one marauder in particular to steer clear of, and that’s Charles from Accounting. By all accounts, he is in fact someone named Charles who once worked in the Spacer’s Choice accounting department. At some point, he traded in his calculator for a rocket launcher and became the most feared marauder in the system. 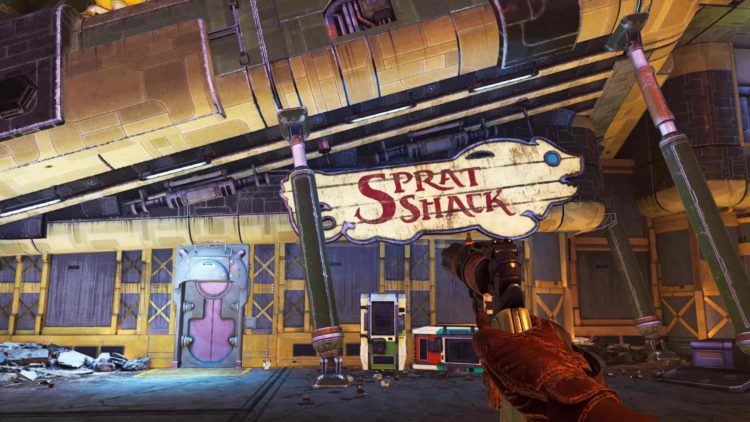 The Sprat Shack is the only place to be when you’re passing time on Gorgon. But first you need to pass the sanity check.

Residents of the Sprat Shack, a warehouse-turned-saloon, seem to be trapped in misery. One potential concern was how I was required to undergo a sanity check before entering the bar. Apparently, some of the scavengers lost their minds while picking through the ruins. It was worrisome, considering that I too was about to dive deep into Gorgon. At least there’s an endless supply of uh, medication to loot.

Chief among the chemical enhancements is Adrena-Time, which is described as a “liquid caffeine booster,” but I suspect it has more in common with other nefarious compounds. It significantly enhances your movement and melee attack speed for a short while, then hits you with a crash that temporarily reduces all of your attributes and walk speed. Spacer’s Choice makes a big deal about how it boosts physical performance to superhuman levels, which is exactly the kind of exaggerated marketing that leads me to suspect that it had something to do with what went wrong on Gorgon. 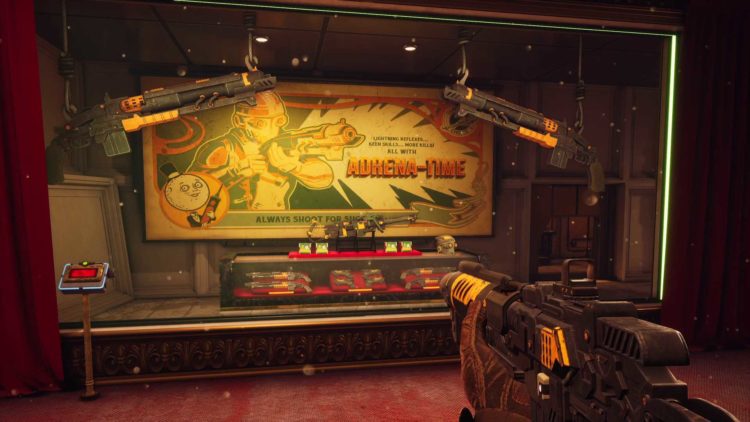 It’s hard to figure out who this display is meant for. The marketers inside OCI? The people making the Adrena-Time?

Meanwhile, the search of Lucky’s room uncovered a preserved eyeball. Who knew that uncovering a corporate conspiracy involved carrying around so many severed human body parts? This one allowed me entry into the Office of Creative Incubation (OCI), the marketing department for Spacer’s Choice.

The inside of OCI is supposed to be a slice of Byzantium, but it got trashed during the evacuation. Its halls are filled with guard corpses and the automated security system is malfunctioning. If that weren’t enough, marauders beat me to getting inside. I’m not sure if they somehow got ahold of a matching eyeball, but I was too busy vaporizing them to ask. 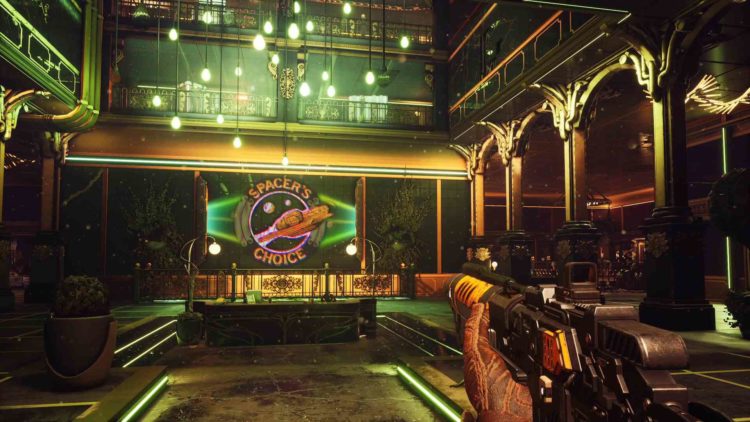 Despite the damage and dead bodies, OCI still maintains an air of classiness.

It didn’t take me long to brute force my way through OCI, but unlocking the manufacturing center led to even more questions about what was going on. Company emails hinted toward an ongoing cover-up and turmoil between the workers. That’s when a mysterious figure revealed himself, telling me to abandon my mission and leave Gorgon to rot. I took his threats as a personal challenge. Plus, I still had to meet Charles from Accounting, which meant exploring the mysteries and dangers of the asteroid even further.

More on that when the Peril on Gorgon expansion for The Outer Worlds releases September 9 on the Epic Games Store.

By Jason Rodriguez22 hours ago
Previews