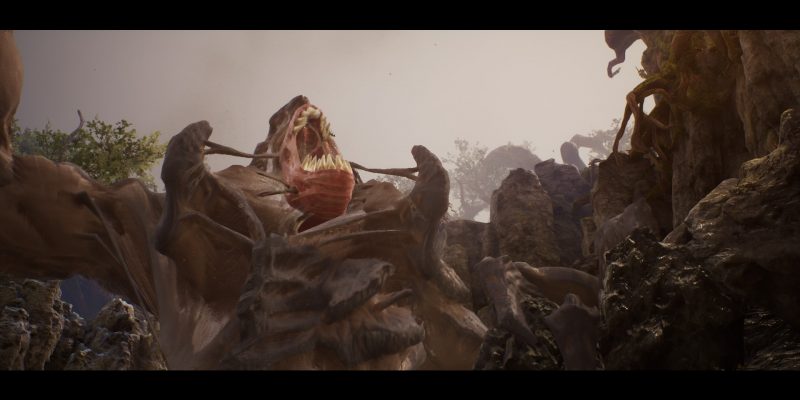 Once you get to the Forest in Outriders, you’ll be greeted with a nasty surprise. The Chrysaloid, the game’s second giant boss enemy, is running amok and it’s up to you to put it down. This guide will break down how to avoid his attacks, what kinds of attacks to focus on, and what his capabilities are. It’s worth mentioning that on world tiers 4 and 5, the Chrysaloid can kill you in just a couple of hits. Much like the previous giant boss battle, this one’s health bar is divided into chunks. If you die during the second chunk, you’ll have to start the fight from the beginning, so keep that in mind. Here’s how to beat the Chrysaloid boss.

When the fight begins, you’ll find yourself in a cavern with the beast. He only has three attacks during this phase. The first of these is he’ll slam his claw down or swipe at you — this is easy to avoid. Just start dodging when he starts winding up to attack and it won’t hit you. His most dangerous move is his breath attack. You’ll see him start to aim a red attack line over the length of the cavern. The only way to avoid damage here is to take cover behind one of several pieces of rock that are impossible to miss. As long as you’re in cover, this attack can’t hit you. If you mess up and it does hit you, though, you’ll lose the vast majority of your health.

If you’re playing as an Outriders class that requires kills to heal, that means you won’t be able to heal at all during this phase. If he hits you with anything after the breath move, there’s a good chance it’ll kill you outright and you’ll have to start over, so be careful. At one point, he headbutts a cavern wall, but this doesn’t pose much threat.

He’ll eventually climb up to the roof of the cavern, which will drop rocks onto the ground below. Simply watch the ground and red circles will appear, indicating where the rocks will fall. Just don’t stand in the red and you won’t get hit. Once you get the first chunk down to nothing, phase two will begin. 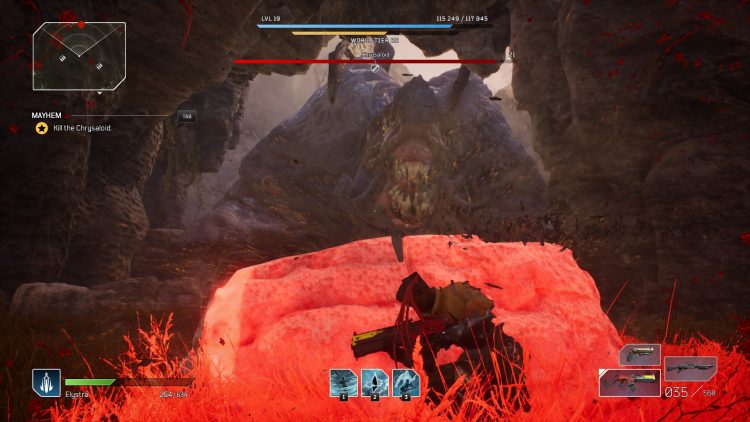 The second phase of this fight takes place in a different area with water all around. It’s much like the first phase, albeit with a couple of differences. The Chrysaloid still has a breath attack, but he only uses it on the far sides of the area, so getting out of the way is easy. This time, he’ll bite at where you’re standing, so keep watching the ground for those red circles. He also drops more rocks on you, but he slings these instead of dropping them, as this area has no roof. Again, watch for the red circles Outriders is so fond of and move out of the way.

When he backs away from the front of the arena, he summons three flying enemies that can poison you. If you’re using a kill-to-heal class, this is your chance to heal yourself. Kill them quickly, because he’ll come back after a while and fight alongside them. As everyone will be able to heal in this phase and he doesn’t have that same breath attack, this phase has less of a threat of you dying. But don’t get cocky, kid, since the flying enemies can still poison you to death.

As for hitting the Chrysaloid, long-range weapons are the best bet here. You can hit him with close-range weapons easily enough at certain points in the second phase, but you’re going to want to consistently do damage. A rifle is a great choice, as are any skills that increase the effectiveness of your bullets. There are fewer openings to shoot him in the second phase, so make sure and get some potshots in while he’s crawling around the cavern’s sides once you dispatch the flying enemies. Keep shooting and he’ll go down eventually. 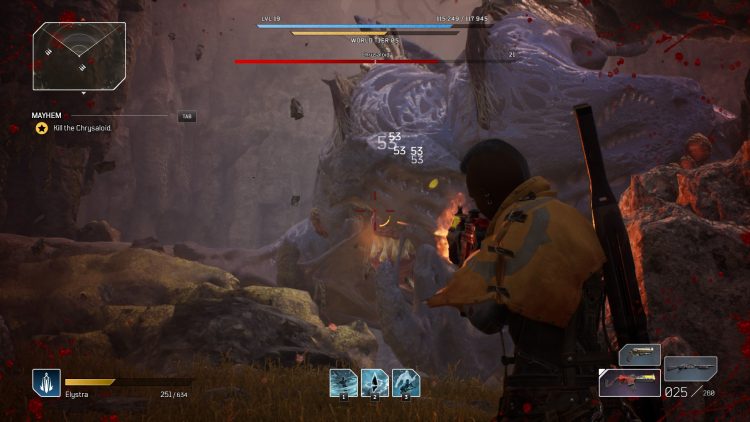 Cheaters in Call of Duty: Warzone face karma in the form of malware