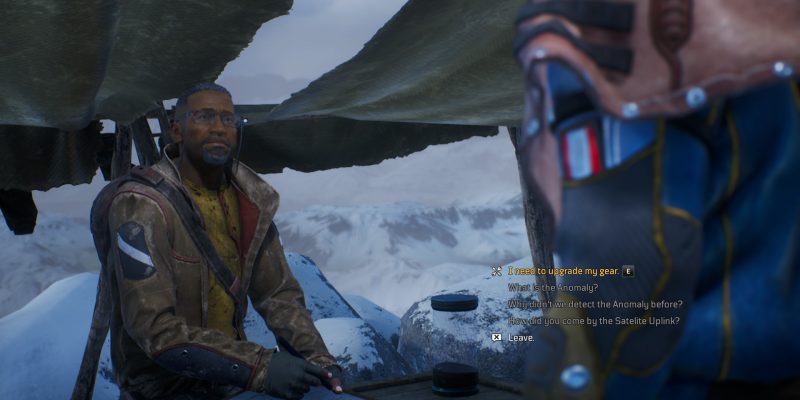 As you probably guessed by now, equipment crafting in Outriders is pretty important. The crafting menu has a lot of functions and some requirements to keep in mind. This guide is going to break down everything you need to know about crafting and the materials it takes to do so. You won’t have access to crafting right away, as anyone who played the demo is already well aware. You won’t gain access to it until Dr. Zahedi joins you at your base camp a bit after you leave the initial town. Once you can interact with him, asking him to improve your weapons is the top conversation option.

Once you’re in the crafting menu, there are five choices available to you. The first of these is improving the rarity of a single piece of gear. When you do this, your weapon’s rarity will move to a higher tier, which adds more attributes and mods as it goes up. It also improves primary parameters, which are damage for weapons and armor points for gear. In order to do this, and utilize the various other improvements, you’ll need to have the appropriate resources on hand. For rarity, the necessary resource is titanium.

Titanium is, unfortunately, quite rare early on in Outriders. It can be found in harvest spots on occasion, as well as sometimes being dropped by strong enemies. The most reliable way of getting titanium is to disassemble purple rarity equipment. Doing so will net you a single piece of titanium, which obviously isn’t much. As you’ll quickly learn, improving gear in most ways is highly expensive and can easily blow through your stock in the blink of an eye.

Now, to improve attributes. These are the special characteristics that appear on lower-tier weapons, granting your character extra health or critical damage. You’ll need shards to do this, which you’ll only get through disassembling equipment. This one isn’t much worth the effort, honestly. 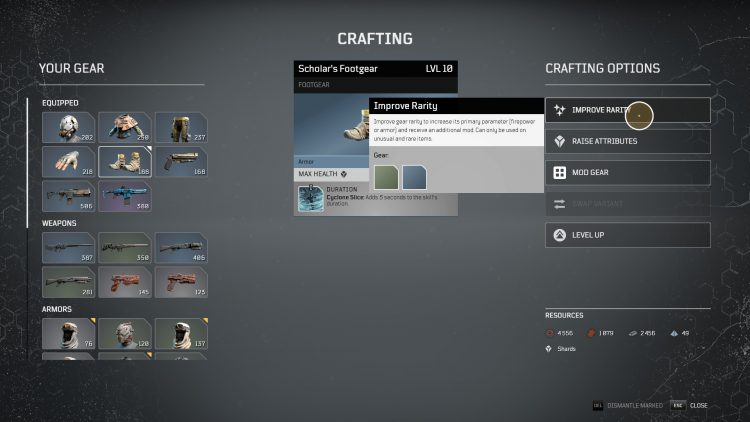 Next up: swapping out a piece of gear’s mods. Armor mods all tie into Outriders’ class skills, while weapon mods grant bonuses during combat. This option is easily the one you’ll be tinkering with the most, as it’s highly affordable and even more useful. Mods require leather for armor and iron for weapons. Leather can be obtained from certain enemies and, yes, disassembling again. But while the previous two options require a hell of a lot of your resources, mods simply don’t require much at all, making it no big deal to swap them out freely.

Then we have changing weapon variants. As you level up, you’ll get more and more types of weapon variants to swap between. All you need to do is swap to whichever variant you want and you’ll have it. Doing this requires iron. Iron can be found in large quantities from blue harvesting spots all over the maps, plus you’ll typically get some for, again, disassembling.

Finally, we have improving an item’s level. Much like rarity, this requires titanium, albeit much less of it. It’s still costly, mind you, so don’t think you’ll be hanging onto your favorite weapons in Outriders all the time. When an item levels up, the primary parameters are improved, just like with rarity. Instead of adding new attribute and mod slots, though, improving levels rerolls attributes entirely. That’s kind of a risky proposition if you’ve got something you’re already happy with. 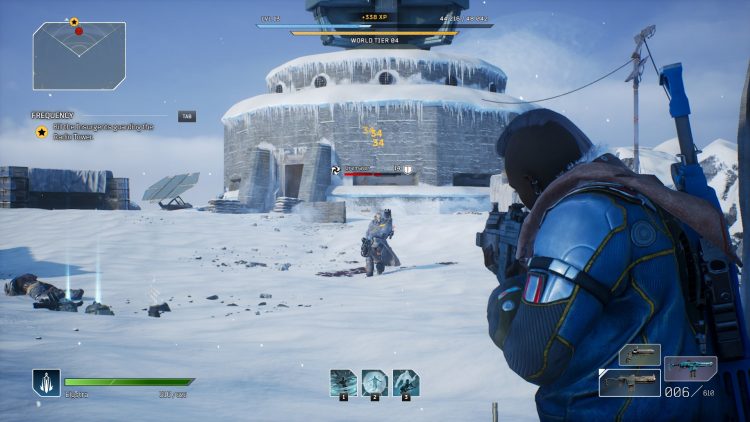 That’s all for this breakdown for equipment crafting in Outriders. If you’d like to learn more about rarity and mods, check out our related guide.

Legends of Ellaria is now out of Early Access, but is it worth it?

Outriders gear rarity and mods — Everything you need to know