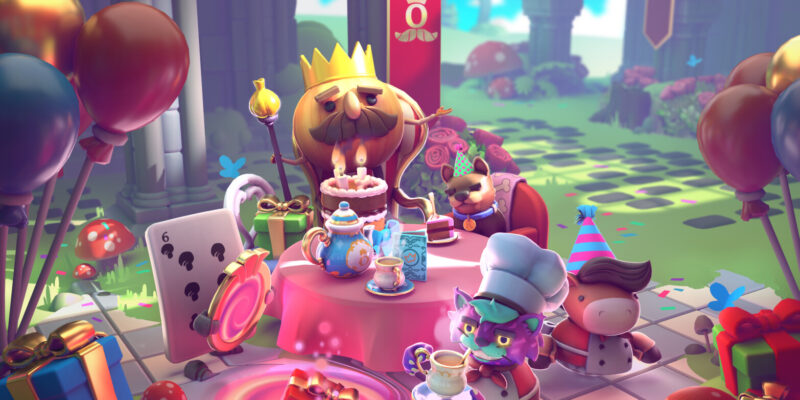 Swap your chef’s hat for a party hat, but don’t get out of the kitchen. It’s the fifth anniversary of the Overcooked Franchise, so Team17 and Ghost Town Games are celebrating with a free Birthday Party update for Overcooked: All You Can Eat. The update is out today, and it brings a lot of joyous new content to the co-op chaos.

Join Kevin and the Onion King in new levels, experiment with new mechanics and get cooking with a new chef. You can check out all the new content in action in the Overcooked: All You Can Eat Birthday Party trailer below.

You get a present

The Overcooked! fifth-anniversary celebration adds five new levels to Overcooked: All You Can Eat. That’s some nice symmetry with the number of levels and the anniversary. There’s a new Tabby Cat chef in the kitchen. And tea-lovers will be pleased to know you can now brew piping hot cups with a new recipe.

The most interesting addition to the kitchen-based couch co-op must be the new Switcheroo mechanic. Playing cards come to life and carry magical portal devices around the levels. Stepping on a portal will transport you across the kitchen. Willingly or not.

Team17 and Ghost Town Games seem to be in a giving mood, because they are topping off the anniversary celebration with a free taste of Overcooked: All You Can Eat. The entire game will be free to play between 1 PM ET on August 9 and 1 PM ET on August 11. If your week is off to a messy start, some co-op kitchen calamity could be just the thing you need to lift your spirits.

If you want to try the Birthday Party update but don’t yet own Overcooked: All You Can Eat, you can pick it up for PC through Steam. If you have no idea what the game is about or whether it’s for you, you can (and should) read our impressions of it to find out more.

Fortnite developer hints at the return of Kevin the Cube