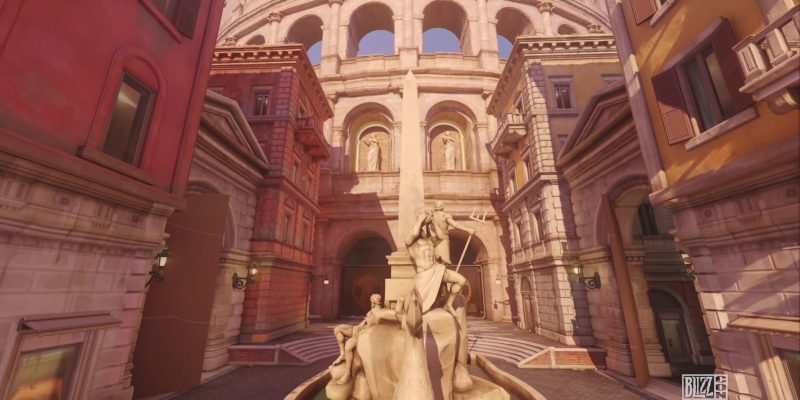 Overwatch 2 is shaping up to be Overwatch but bigger in just about every way. From what we’ve already heard about the long-awaited sequel, Overwatch 2 will include new heroes, game modes, and aesthetic changes. Of course, that also means new maps for players to fight through. Currently, Overwatch has 21 maps, but that number’s going to get much larger soon. During its showcase at Blizzconline 2021, two new maps for Overwatch 2 were revealed: Rome and New York City.

Aaron Keller, the associate game director for Overwatch 2 giddily revealed Rome, or at least its Overwatch-ified version. The ancient city still has traces of its past. All around, players will be able to see classic Italian architecture and Roman monuments. There are tight corridors and the streets are all cobble. Every building is made from red stone, and looks as if it were ripped out of another century. All the while the coliseum watches over the playing field. Being in Overwatch 2, the new map will also include some of the game’s futuristic stylings. There are hover-lanes far above the city and holographic statues of Romans.

Overwatch 2‘s New York City map was introduced by Scott Lawlor, the game’s audio director. Much like Rome, New York City will include the city’s iconic architecture and landmarks. The Empire State Building looms over the futuristic city as players fight through Grand Central Terminal. Outside of iconic locations, players will fight through condensed versions of the city’s boroughs. The starting area, for example, was made to resemble Greenwich Village and is full of small stores and pizza shops.

More maps are coming to Overwatch 2

While only two new maps for Overwatch 2 were revealed today, that doesn’t mean they’re the only ones coming with the game. Jeff Kaplan, vice president of Blizzard, hinted towards more maps being in the works for Overwatch 2. However, they had to move on or else “we would just have to reveal more maps.”

The remaster rumors were true, Diablo II: Resurrected has been revealed