There was one genre missing from Blizzard’s gaming arsenal and that was a shooter. It was inevitable at some point Blizzard would take the plunge. For the past few months, the hype surrounding Overwatch has been immense, with the long beta test and the great animated shorts all playing a part in getting a community excited not just for the game, but for the Overwatch universe.

Creating interesting game universes is what Blizzard excels at: Diablo, World of Warcraft, StarCraft and now Overwatch. With Overwatch, there’s a difference: the Overwatch characters’ story has very little to do with the gameplay. There’s a definite disconnect. You can enjoy the Overwatch lore but it doesn’t really translate into the game because this is a multiplayer team-based online shooter where the characters are all fighting each other. 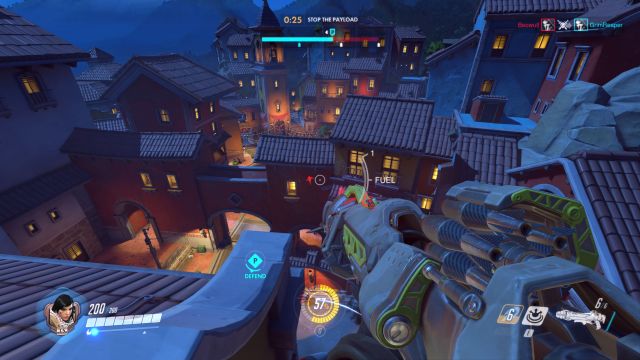 No doubt about it. The visuals are lovely.

Overwatch comes with a full price tag; it’s not free-to-play even though most of us thought it might end up that way when it was announced. Hearthstone has earned Blizzard a load of cash and Overwatch could have slotted into the free-to-play model quite easily. Apparently, that wasn’t what Blizzard felt like doing this time, so all of the game’s 21 characters and maps are unlocked from the get-go.

This brings us to the game’s purchasable loot boxes. These boxes can be earned for free by levelling up, but there’s also the option to buy them which feels a little in your face. Considering these contain cosmetic items such as skins, emotes, new voice clips, and sprays, selling them on top of a full price game seems a little money grabbing when you look at the prices of 2 boxes for £1.59 going right up to £39.99 for 50.  Should you receive a duplicate item from playing or through a purchase, you receive a small amount of game currency so at least there’s some compensation for that.

Keep playing to unlock cosmetic stuff or buy them if you want.

Blizzard’s fan base invests heavily in Blizzard’s IPs, and from a business point of view, Blizzard knows these loot boxes will sell so they may as well charge for them. As someone who isn’t really concerned with buying or earning items for playing a game it’s not a major issue, and I’m sure others might feel the same considering they have zero impact on the gameplay, but it would have been nice not to see them being available for a price.

There’s no doubt Blizzard has created a very polished shooter, the 12 maps all look fantastic and the characters are brilliantly designed. Class roles play an integral part in the game, and what Blizzard has managed to do well is create unique characters within each role, making it easy to find a character that suits your playstyle and slots into the rest of the team.

Each character has a couple of skills, much like a MOBA (which Overwatch definitely isn’t), and an ultimate which charges up as you play. The skill diversity is solid and they’ve obviously thought hard about how they could make each character’s skills unique. Whether it’s Tracer’s rewind time, Bastion’s turret mode, or Pharah’s rocket leap, they all play a part in making each match play a little differently. There’s certainly no complaint with the character designs and skills: they’re very well done and complement each other well when a team chooses the right mix. If that mix isn’t gelling during a match, then players can switch to any other character when they die during the game or return to the spawn point. 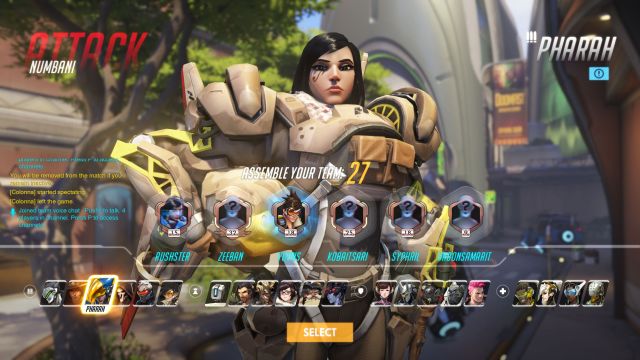 Hmmm. Which one to pick?

There are four game modes on offer, split across three types of objective. Escort has players escort a payload across the map; Assault has one team trying to defend a point from the other; Hybrid has a point that needs capturing followed by a payload that needs pushing; and Control has both teams battling it out over one control point in a best-of-three format. Although it’s four game modes, there are only two types of objectives, escorting and capturing as either offense or defense. Escort is by far the most exciting of the lot, and while they’re not exactly original, they are well executed. The problem with the game is that each round can literally last about five to ten minutes depending on players’ skill levels, so it’s not particularly engrossing. Once the game is over it’s back in a queue for another round of the same albeit on a different map. Whether it will keep all players engaged remains to be seen but it’s a little too samey.

Pharah it is for this match. Here’s some other folk that won’t say anything in voice chat.

The maps are quite well designed with plenty of hiding spots, choke points and open spaces although it has to be said some feel quite small. Aesthetically they are lovely with a great variety of locations, offering everything from Egyptian ruins to London streets. Blizzard has also thought about verticality and characters than can jump, grapple, jet pack or climb can seek out vantage spots as long as there’s a totally flat surface to stand on. Still, after awhile the novelty of visuals wears off as you concentrate on the action. 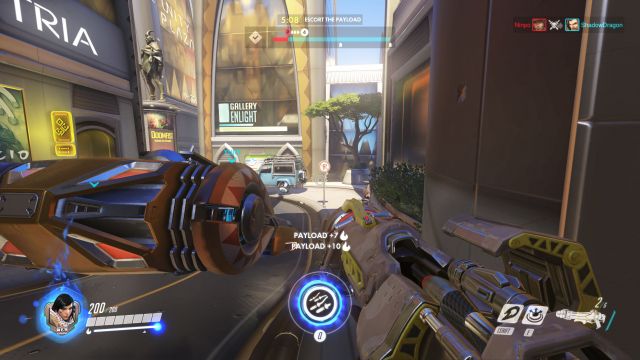 Some help moving this thing would be nice.

In an attempt to mix things up, there is a “Weekly Brawl” mode which will change the game mode rules slightly. This week, for example, health is set at 200%, ultimate gain rate is increased by 150%, and ability cooldowns are reduced by 75% on a selection of maps. These modes rotate and will at least bring something slightly different to the table each week.

The game has obviously been designed to cater for the pro and more casual gamer. Each round doesn’t require a huge time investment and there are continual rewards as you level. Blizzard learned a lot from WoW with players needing to be constantly rewarded to keep them playing. There’s bars that move up and lots of numbers showing progress making you think you’re getting better all the time. Overwatch throws a lot of this at you and it probably feels even more regular because the games are relatively short. It does try to tempt you in for one more round. 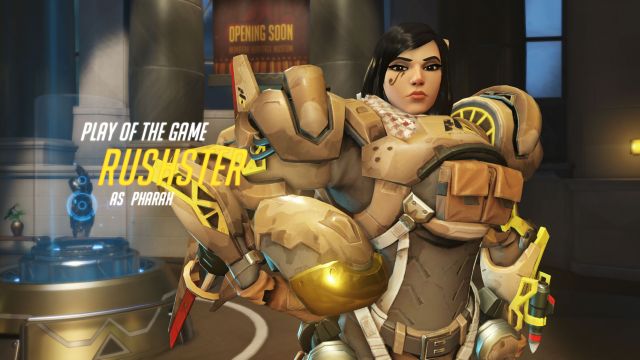 Play well and everyone has to watch how you killed other players.

There is another irritating problem with the way matches functions. For example, you might play two games with a team and then a load of players leave the game. This resets the matchmaking and starts a new match which means you can end up playing the same maps/modes you have just finished playing. There have been a few times where I have decided to pull the plug because I just can’t face playing the same map/mode all over again so soon after the last game.

Blizzard has stated in the past that any future games they create would have eSports in mind as they know there’s big money to be had after the success of competitive Hearthstone and Starcraft. Overwatch will slip into that perfectly and Blizzard will be pushing hard to make this a major eSport. Great news if you’re a pro player or even an eSport follower. What might happen, however, is the more casual gamers could simply fall away and move on. 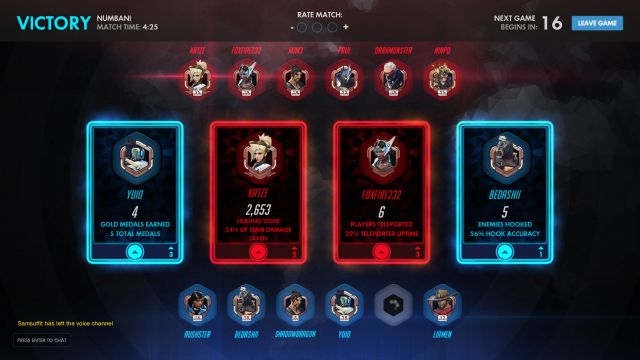 Vote for who performed best in a match. Pick me! Pick me!

Going back the Overwatch universe quickly, and the pricing. This is a full-price game and yet there is no single-player element whatsoever other than playing against bots. That coupled with so few game modes makes this feel overpriced at the moment despite the game’s overall slickness. This is could be a problem in the short-term, but as with all Blizzard games, they will continue to add to the game moving forward. How far they will go remains to be seen but right now it’s a little light on content. We are reviewing the game today and not in six months.

I also think Blizzard missed a trick not shipping this with a single-player element. Then again, that may come in the future as part of some kind of expansion or an Overwatch universe spin-off. There’s a lot to work with here.

Overwatch has not been an easy game to review and what’s on offer now is good but not brilliant value for money at $40. It tends to wear thin quite quickly. This will could change in the months ahead as hopefully Blizzard will add more game modes,  but I can’t help feeling a little short-changed at launch. The loot boxes aren’t even a concern for me at least.

Blizzard has taken all the best ideas from other shooters and packaged them into Overwatch and it’s a solid foundation for Blizzard to build on. For now, it might be worth waiting to see where it goes in a few months and whether the community is still mad for it. That will depend on what other game modes are added and how often Blizzard releases free updates.

By Blake Grundman22 hours ago
Reviews