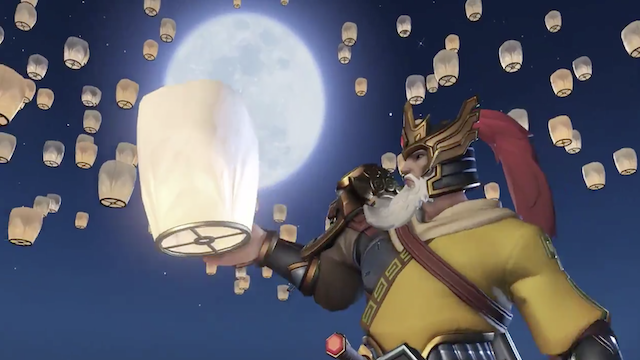 With the Lunar New Year upon us, it was always a pretty safe bet that Blizzard would have a new Overwatch event in tow. And, surprise, that’s just what they announced this afternoon.

Over on the official Overwatch Twitter account, the publisher revealed that tomorrow, January 16, will mark the beginning of the Year of the Rat. You can see its teaser trailer below, with Hanzo lighting up the sky with special paper lanterns.

Get ready to ring in the Year of the 🐀!

Here’s what to expect from the Year of the Rat

With the new event, players will be able to unlock a number of new skins for their favorite characters. A Twitter user by the name of OverwatchNaeri managed to share some of these designs, and they look pretty sweet. You can check them out in the tweet below.

Alas, that’s all we know about the event at this point. There’s always the possibility of the team introducing a new map or some special mode to keep fans engaged.

In the past, we’ve seen Overwatch‘s Lunar New Year events offer up some good content. Last year, for example, celebrated with various skins from the Three Kingdoms period. Other years provided special events, like Capture the Rooster, as well as a competitive Capture the Flag mode. A new map, Ayutthaya, also entered circulation as part of these annual celebrations. Blizzard should provide more information on what this year’s will contain within a matter of hours. We’d certainly be down for a new map.

Whatever the case, fans will want to keep a close eye on the game tomorrow to see what the Year of the Rat has in store. If you’re down for getting your hands on new skins and other goodies, you won’t want to miss out.

In case you’re one of the few who have yet to grab Overwatch for yourself and want to join in on the event, you can grab it on the Battle.net store.

World of Warcraft’s Battle for Azeroth concludes with Visions of N’Zoth, now available

Ninja and other celebrities are getting Fortnite skins