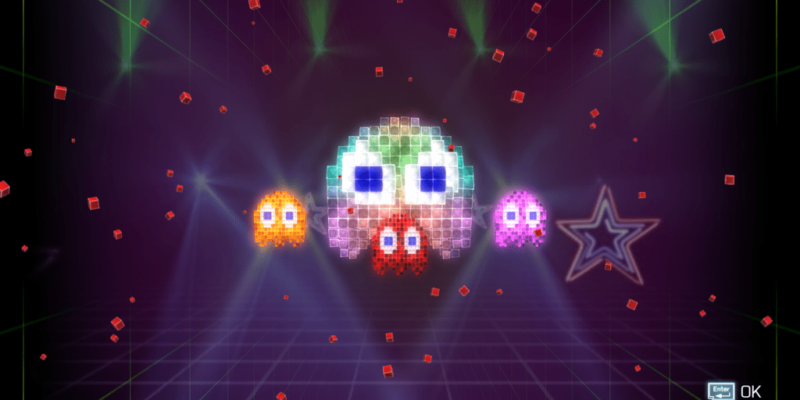 Unlike, say, Aidan Pierce’s cap, Pac-Man is legitimately iconic. He’s one of a scant number of videogame symbols that will register flickers of recognition in people who don’t even play games, and a figure of comfort in the diminishing number of airport lounges, pubs and hotels that still host arcade machines. There’s a reassuring and robust familiarity to Pac-Man’s chaser-and-chasee dynamic. Even when it’s not quite raising the thrills of old, playing classic arcade Pac-Man feels like an act of cultural recognition. This is gaming’s heritage. Study it well.

The great challenge faced by Pac-Man Championship Edition 2 is that not only must it find a sufficiently new take on the Pac-Man formula, it must do so as a sequel to a pair of games (Championship Edition and Championship Edition DX) which already did this successfully. For those who’ve voraciously consumed multiple Pac-Man re-jigs over the years, a slight sense of fatigue could be forgiven. However, in the case of Championship Edition 2, familiar territory is at least partially the point; and this game proves that the spherical dot-gobbler’s endlessly switching role of hunted and hunter has enduring allure. 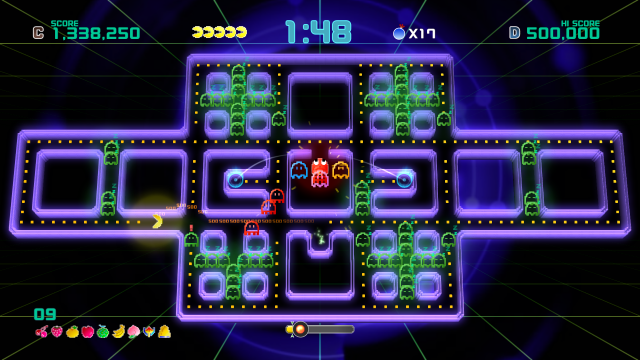 Won’t be long before these gaol-ghouls are back on the streets.

The rule changes presented by Pac-Man Championship Edition 2 are not radical, but alter enough about the game that the approach feels novel. Pac-Man still has to eat dots, bonus fruit and pills. He’s still pursued by ghosts (up to the parts where he isn’t). But the game’s split emphasis on a pair of score attack and beat-the-clock modes gives rise to additional obstacles and tactical challenges.

In Score Attack, players are given five minutes to amass the mightiest score possible across one of ten lightly themed levels (one is heavy with ‘jump’ portals, another’s maps are largely laid out in formal squares like its Manhattan namesake). Each has a difficulty level, from Single Train (Beginner) through to Regular and Extreme. These dictate how many ghosts will chase you at any one time, how many lives Pac-Man gets, and how touchy the ghosts will be upon contact with Pac-Man himself.

Bumping into a ghost in Pac-Man Championship Edition 2 is rarely an instant death. Instead, Pac-Man can nudge and jostle them a bit (only once on Extreme) until they become ‘angry’ and flounce off the grid. A few moments later, they’ll be back; glowing, looking a little more furious than usual, and deadly to the touch in the familiar style. Reducing the immediate danger from ghosts feels like both a practical decision, as the speed of the tight-quartered levels can considerably ramp up, and an opening for strategies around Championship Edition 2’s other innovation: the ghost trains. 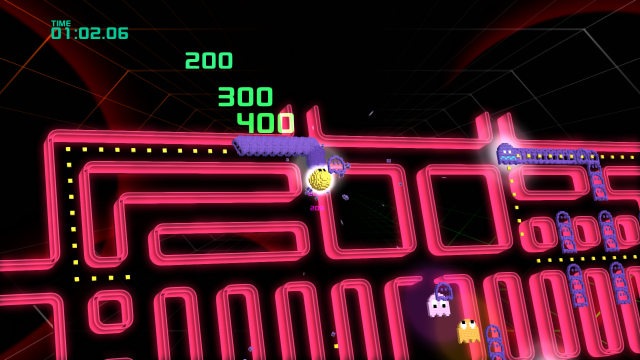 Pac-Man’s metabolism is something to behold.

Dotted around the majority of the game’s maps are little green ‘minions’. When passed or struck by Pac-Man, these minions join up with an active ghost and form a train. It’s basically impossible to avoid doing this, as your dot-devouring path will inevitably take you near to several clusters of minions. As a result, the map is quickly filled with lengthy ‘trails’ of ghosts. Sometimes, the prudent thing to do is bump them on purpose, angering the ghost, but also (briefly) clearing an important path for yourself as the ghost flies off the map and returns in a rage.

At other times, it makes more sense to just halt your advance and allow the ghost train to pass. Pac-Man Championship Edition 2 provides for this too, giving the sentient yellow pie-chart a rapid brake function. This allows you to slam to a stand-still when the situation demands it. Conversely, pressing the direction button a little ahead of an upcoming turn will cause Pac-Man to take a corner at increased speed (indicated by some little sparks), enabling you to put distance between yourself and a pursuer, or to gain ground on the moving fruit and power pills that periodically crop up.

In addition, players can deploy a limited number of Jump Bombs, which catapult Pac-Man back to the starting point of the level; conveniently close to where fruit and power pills tend to appear, and next to a ghost-immune safe spot. On easier difficulties, hoarding these bombs for bonus points is simple. For harder difficulties, they become more of a necessity for survival. 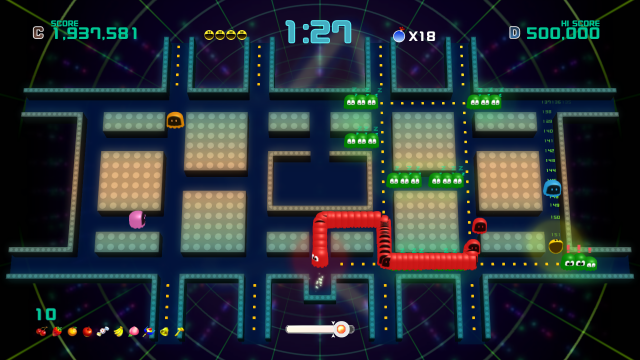 The outfits may change, but dot-consumption remains the aim.

Progress between a level’s multiple maps occurs when Pac-Man has consumed enough dot-candy to spawn a piece of fruit. Eating the fruit and transferring between levels before all the dots are digested results in a penalty to the ever-increasing (up to a limit of 500) score combo for eating said dots. But it can sometimes be worth the loss if time is tight and you feel rapid progression will get you closer to a big, pill-fueled score payoff.

When a power pill is consumed in Pac-Man Championship Edition 2, the ghost trains become vulnerable. Ghost trains are part of every Pac-Person’s ideal nutritional diet, and also provide the largest boosts to score. They’ll rush around the map (with increasing speed as they’re whittled down to one) and do their best to avoid being consumed, but also follow marked ‘tram lines’ that give you an idea where they may turn next. Effective positioning to get the ghosts in your gob in record time is a vital skill for both Score Attack and (the time-based) Adventure modes.

Score Attack has a timed element too, of course; a constant, calculated weighing up of your most efficient use of those precious seconds. Bombs can quickly return you to a high-scoring fruit, but will also give you a decent bonus at the final tally-up. A risky bit of play might pay off in the long run, but losing a life will reset the dot-combo all the way to zero, cost you at the final score-tally, and may even end your run outright. Then there’s the matter of whether your Pac-Man skills can keep up with what your brain is telling you to do. 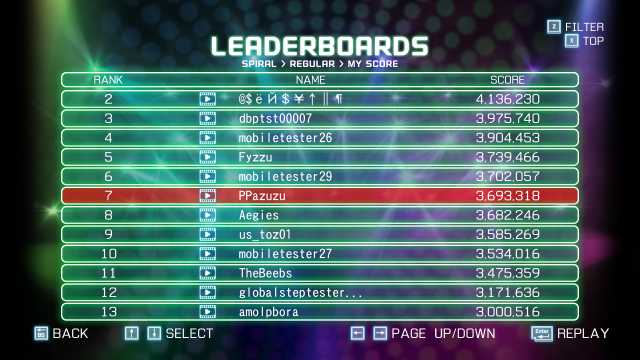 Curse you, McDonald. Always one step ahead. Or two, in this case.

While Score Attack is all about posting those S-Ranked scores all over the leaderboards (or, if you’re me, posting your B-Ranked time and cursing at Tim for still being two places higher), Adventure Mode is based around beating a tight clock.

Each level has a set target (say, grabbing six fruit), and puts hefty time constraints on every map. Success in Adventure Mode has little to do with noshing all the dots, and puts a lot more emphasis on being able to position yourself to snap up the fruit (or pill, whatever the case may be) as soon as it shows up. That’s particularly true of the higher-difficulty challenges, which reduce the time limits even further and feel as much like spatial awareness puzzles as Pac-Man levels.

Progression through each of a given stage’s ten levels rewards one to three stars (according to difficulty), and a set amount of stars are required to unlock the gateway Boss Battle with a mega ghost who blocks your path to the next stage. Boss fights are pretty similar in structure to the preceeding stages (get enough dots to spawn the fruit and progress as rapidly as possible), but also have a meta-game where you’re encouraged to grab as many extra Pac-Lives as you can. They also have a large, colourful Boss ghost looming in the background and making things inconveniently awkward to see on the map itself.

Adventure Mode, as far as I can tell, stretches across six stages. I say “as far as I can tell” because while the star-based unlocking system is pretty generous for the most part, the boss of Stage Six requires 222 stars to unlock. Which is all of them. Since I’m unlikely to ever accomplish this, I’ll just cop to not actually playing that (probably) final encounter. 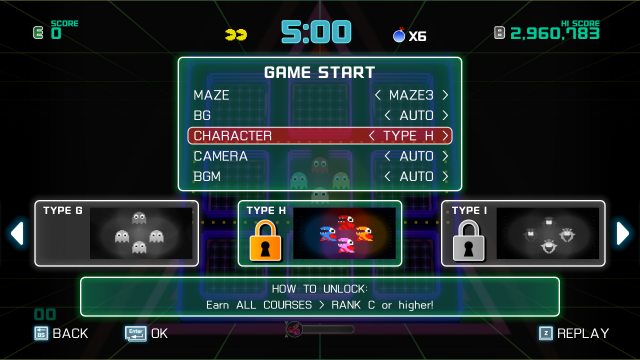 Fancy switching up the level’s look? The Pac-Fashion is at your fingertips.

The PC version of Pac-Man Championship Edition 2 is pretty light on any platform-specific options. For me, it defaulted to 1080p and 60fps. I presume the resolution was simply conforming to my desktop default and that the frame-rate caps at 60. It’s hard to say for sure though, because there’s no in-game way to adjust any of those things.

You can’t reconfigure the keys either, but since there are only six of them (arrow keys for directional movement, space for jump bombs, alt for brake) this didn’t feel like a major imposition. I also tested out an Xbox 360 pad to see if the d-pad still feels horrendous. It did. The pad otherwise worked fine; though once you commit to either gamepad or keyboard the only way to switch is to reload the game.

Affectionately and respectfully stylised, with a whole host of customisation options for camera angles, soundtrack, maze architecture, and ghost designs, Pac-Man Championship Edition 2 drifts a delicate path between reinvention and reverence. It carries the same compulsive urge towards high scores as the original, and introduces smart mechanics to drive the eternal loop of pursuer-turns-pursuee-turns-pursuer-again in slightly new ways. Anything that gets me enthused about a 36 year old game must be doing something right, and the parts of the weekend I just lost to Pac-Man Championship Edition 2 indicate this title is another sturdy reinvention of that familiar, forever-munching face.

Stellaris to get some ship rebalancing in Heinlein 1.3 patch