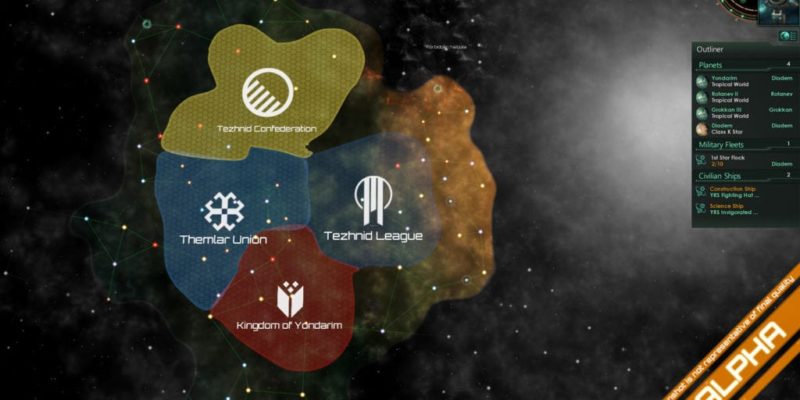 One of Paradox’s upcoming announcements (they have a Fan Gathering stream scheduled for 20.30 CEST on 6 August) has been accidentally leaked ahead of time by Steam.

Now removed, the splash page for Stellaris “an evolution of the grand strategy genre with space exploration at its core” briefly appeared on Valve’s storefront. It was caught by a number of people, including this poster on the Paradox forums.

Images from the Stellaris page were saved too, and can be seen below.

It appears to be Paradox’s take on a 4X game, but with many of their trademark ‘grand strategy’ touches. You can see the traditional ‘pause time’ button (familiar from games like Crusader Kings 2 and Europa Universalis IV) in the upper right on one or two shots.

How much else this game shares with titles like those is obviously not yet known, but the fact that the Steam blurb describes it as ‘grand strategy’ rather than 4X is very interesting. I’ll have my fingers crossed for a space strategy game that actually puts a bit more stock in political intrigue than yet another ship customisation yard.

By the looks of some of the other shots, there will be some degree of space combat involved. Whether that’s real time or not, and how much control the player has over it, remains to be seen.

More details will no doubt be divulged at Paradox’s official Stellaris reveal on 6 August.