It was inevitable I’d end up handling the Path of Exile review, as I’ve been in and out of the game since the beta test started – which I think was back in about 1790. I did take a long break, though; character wipes during the early test stages were always frustrating. So here we are: the game is officially released and out of the beta.

For those who’ve not been following the game at all, Path of Exile is an ARPG set in a game world called Wraeclast and has been developed by New Zealand-based indie developer Grinding Gear Games, who readily admit they are huge fans of the first two Diablo games.  I say “the first two” because Path of Exile is more in tune with Blizzard’s second game, and that was GGG’s plan. But let’s get one thing straight: this is not Diablo. This is Path of Exile, and it comes with its own surprises.

In POE there are numerous characters with which to explore the game world – seven in total, which is more than you would usually find in an ARPG at launch. The seventh character, the Scion, was released on launch day and can only be unlocked toward the end of the third act. The main difference with POE and other ARPGs is that each character gives you a starting point for your progression within the game’s passive skill tree instead of a set pool of primary skills to start whacking points into.

I’ll address the passives tree now as it makes things a little easier to explain. I’ve seen the passive tree referred to as the “Skill” tree but I’ll just reiterate that the mental looking tree you‘ve probably seen shots of before are not skills. These are passive skills.

Choose your path wisely. The passives system is huge!

Each class begins at a different point in the passives tree based on their basic archetype, and to a certain extent the character you choose will determine how the character develops early on. As you progress, each character can start to move away from the starting point and move toward less obvious passive abilities in the tree, and move toward passives that other classes might expect to use. This is where Path of Exile’s character development starts to get interesting.

So if the tree is not skills, where are the skills? Grinding Gear Games wanted to create a skill system that was not completely tied to a particular class archetype and instead focused the skills around a gem system and item sockets. As you go about the quests, gems will drop which can then be used in item sockets. When socketed these gems give you a skill or support existing skill gems you’ve slotted into your gear. Different coloured gems are slotted into the matching coloured sockets on gear. It sounds complicated but it’s very simple in practice and any ARPG players will feel right at home with this.

With skills dependent on sockets and gems, this makes itemisation pretty interesting and it can cause some real dilemmas when it comes to what to equip based on the gems you’ve acquired. It’s an ingenious system that makes a player think about their gear, skills, and even where they allocate the passive points that are acquired when levelling. Do you need more strength? Do you need more Int? Does a cool piece of gear require more of these stats? Not to mention the fact you can come up with some pretty interesting character builds.

At its core, Path of Exile is a typical ARPG hack-and-slash affair. Played over three acts, you take on quests, collect items and gear, and… well, you know the drill. The combat is fluid as you hack your way through the mobs, firing off skills and bashing away at mana and health potions to stay alive. There is a story in POE but after a while it all became rather irrelevant – I’m not a massive lore buff, and the voice acting is not the best at times so I had a tendency to switch off despite my best efforts. But even if you don’t pay much attention to the story it makes little difference, the gameplay is cracking fun.

Travelling around the world of Wraeclast is simply done by unlocking waypoints while questing, and there’s plenty of atmosphere to soak up. Whether it’s dashing along the coastlines of Act 1, running through forests in Act 2 or finding a path through the Imperial Gardens in Act 3, the game’s locations are pretty diverse. GGG have done a good job with the visuals; it may not be as polished as Diablo 3, but it has its own look and charm. I do still wish that the view was not so close to the character and the viewing angle was tilted away a little more. That was my first ever gripe with the game when I saw it many moons ago and it still bugs me today. Perhaps I’m just being picky.

The quality of the game really changes as you move through the acts. The first act can feel a little tedious and less diverse than later acts, which is as shame as first impressions count, but when you hit Act 3 some of the early roughness disappears. This is probably because GGG are a small indie development team that has been going back and fixing up some of the early content that was released first.

Randomisation is a key factor in Path of Exile and fortunately GGG has managed to get this right with levels that really are random – I’ve not come across a level yet that’s stayed entirely the same. This is a huge plus point for replayability, but it also has one drawback: when you die and have to go back to a waypoint, the level has reset, so you have to battle your way through the hordes to get back to where you were. That doesn’t happen too often, but it does happen and it also depends on how quickly you complete a level. 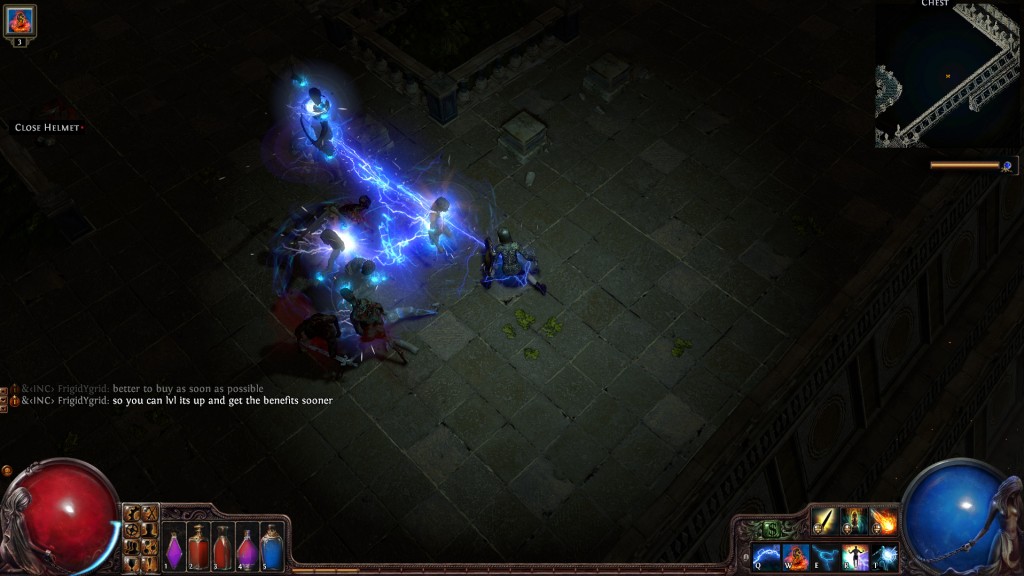 The economy of the game is not the usual ARPG standard, because… there is no gold. Shock! Horror! No gold! Instead of gold the economy is based around the items themselves, whether it be materials, scrolls, orbs etc. These items are essential to help players in the game with their gear and builds so there’s a barter/trade community to keep the economy interesting. It’s a good move because it’s a community builder that encourages interaction and grouping with others. It also keeps players playing because messing about with sockets, changing items properties and finding out what the stats are on your latest unique drop is what makes playing an ARPG fun.

Item organisation is what some may consider old school. Playing item Tetris in the inventory can be a pain and I’m still perplexed that this system wasn’t a bit more refined with some larger items taking up less slot space – shields are a particularly annoying space hogger. Moving items around and managing your inventory isn’t bad, it’s just a little clunky.

What players really want to know is whether POE has replayability. Can it keep you playing with just three Acts? Is it an ARPG that will keep on giving? The game has this rather odd addictive quality and that’s in part down to the work GGG put into community tools such as the new guild options that were added at launch, and just as important are the events and game updates.

Throughout the beta test the game was constantly being updated with fixes, but just as impressive was the speed at which GGG was releasing new content for players. Every couple of weeks there was something new to discover. The promise of new content – a promise which GGG manages to keep – is a big reason to keep playing. There are regular smaller content updates every couple of weeks and a full expansion is due in March 2014 which should bring Act IV into play.

Races and Leagues also throw down the gauntlet with all kinds of different challenges for players to win points and prizes. GGG realise that not everyone can sit down and play for days and hours on end so there are a good variety of challenges outlined in the race schedules, some longer than others. With these constantly ticking over, there’s always something to keep players engaged.

I’ve barely mentioned it yet, but probably the most appealing thing about POE for any gamer is that it’s free to play. Before you all go “oh, another shitty pay-to-win F2P game” – stop! From the start of the game’s development GGG were determined to fund the game through microtransations that were completely cosmetic. In other words: no XP boost items. No super weapon boosters. None of that junk. You can buy different effects for your items, alternate skill effects and account features such as extra stash tabs. It’s all very above board.

GGG have to be commended for keeping pay-to-win away from POE but it’s going to be up to the community to support the game. If the current pool of store items are enough to fund the game and further content development the future looks bright, but players will have to keep playing and new offers will have to be added all the time to keep that cash coming in.

Having played the game for a long time now on and off, it’s not easy to write about it, as most of the game features have been written about to death over the past couple of years here on IncGamers. In all the time playing over the past 12 months or so it’s apparent that Path of Exile does most things right if you’re looking for a new ARPG – it can look a little rough around the edges in places and there are minor connectivity issues from time to time, but these are not major issues when you consider what’s on offer.

Over the years I’ve played more ARPGs and free-to play-titles than you can throw a fireball at, and I think I can safely say that this is one of the best ARPGs around at the moment. It’s certainly the best free-to-play title I’ve played in a long time. I think GGG nailed it.

Brian Blessed TALKS ABOUT PUTTY SQUAD IN HIS NORMAL VOICE

By Jason Rodriguez9 mins ago
Reviews

By Kevin Foley1 hour ago
Reviews