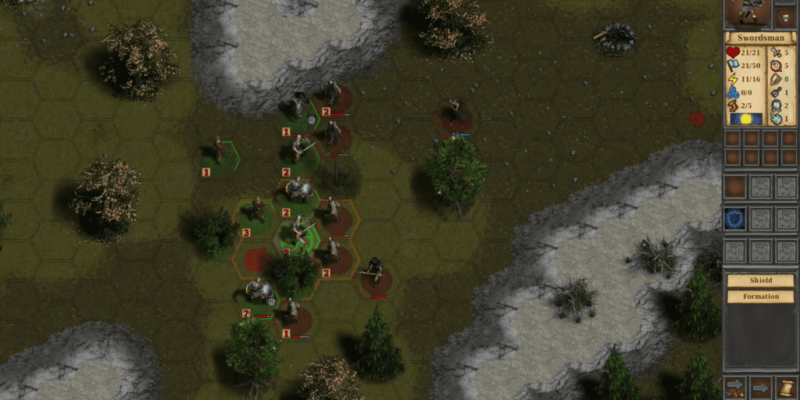 Time for some hex-based strategy action, courtesy of the Steam Greenlight system and Warbanners. This game came out yesterday, and follows the journey of Roderick and his Silver Griffins mercenary group. They’re a decent sort, busying themselves with smiting the undead and so on.

In fact, in this particular mission the Silver Griffins are rescuing some children who’ve been hauled off by a Necromancer. Generally speaking Necromancers don’t abduct children in order to raise them in safety and security, so it seems best to get them back. That involves some tactical, turn-based combat, which is pretty much the Warbanners stock in trade.

It has some neat concepts of its own though. There’s a light and dark mechanic that aids (or hinders) characters, depending upon whether they can see in the dark or not. That doesn’t directly come into play in this video, but some pre-mission dialogue options suggest a night raid may have been a possible choice. Flanking and rear attacks are important too, so you need to pay attention to which way your warriors are facing.

There’s a full range of abilities and magic in there too. You’ll see a fair bit of magical action from the enemy in this footage. Warbanners also has a stamina and morale system, which get an airing in this mission as well. Tune in, below. If you need any additional incentive, there are some text portions of this game and I felt compelled to ‘do the voices’ for them.

By Daniel Pinheiro6 days ago
News