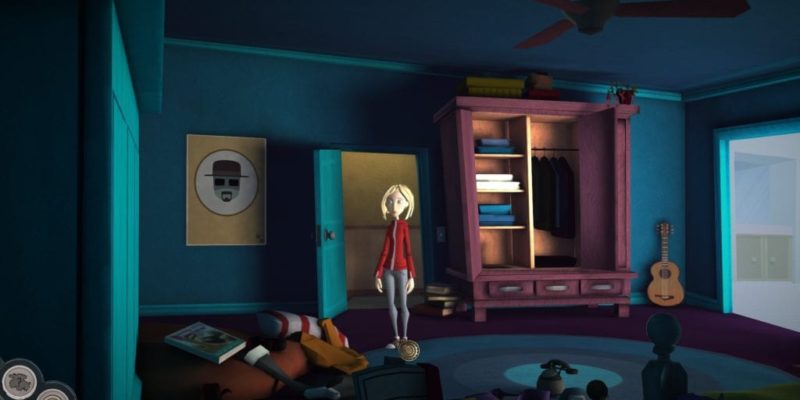 The Eberlings are a science family, so naturally there’s some love for Heisenberg.

Long-time readers (and IncGamers podcast listeners) may know that we have a running gag about the often bizarre logic behind adventure game puzzle design. The current benchmark for obtuse reasoning is Secret Files 2, a game in which you have to use a roller-skate on a UFO.

Step forward Perils of Man, a new contender that compelled me to balance a sinking, Singapore-bound cargo vessel by coaxing unwilling donkeys with placebo medicine. And that’s not even the strangest string of events present in the game’s tangled third act.

The Eberlings are a science family, so naturally there’s some love for Heisenberg.

It’s possible you’ve already played the first chapter of Perils of Man in its previous incarnation as 2014 iOS release. Luckily, this isn’t a Deus Ex: The Fall type situation. The interface for dialogue choices is extremely basic, and the method of using items on external objects (by pulling them outside the inventory wheel) a bit stiff, but I’m not sure iOS can take the entire blame for those things. Unity-powered adventure games can make the transition between platforms without too many horrible control issues or compromises, and Perils of Man does at least manage to include a few PC-friendly graphics toggles (like depth of field) and a straightforward quality slider.

Port issues aren’t really a problem. The problems are more to do with puzzle design, contradictory dialogue, and some evident budgetary issues which hurtle Perils of Man from a strong set of opening sequences into a confused and perfunctory conclusion.

This title also steadfastly rejects the modern adventure game conventions of allowing a double-click on exits to automatically transport your character to the next room, and of providing an optional button or toggle for interactive hot-spots. At least, I believe that latter point to be the case. Trying each key on the keyboard yielded no results in this review build.

As a result, an unwelcome amount of my five hour play-through was spent either watching protagonist Ana wander across the screen to a distant, familiar destination, or combing the area with a mouse cursor. 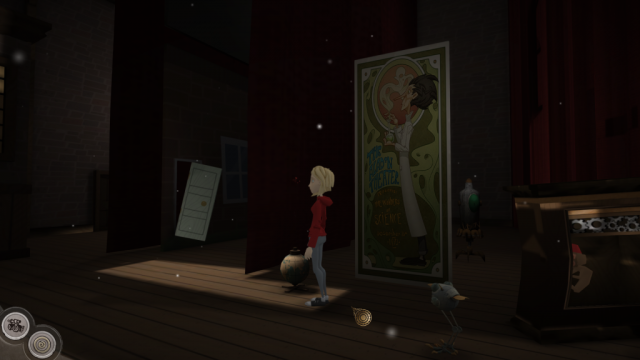 Curiously, Bill Tiller is listed in the credits but not under ‘Art.’ I’m pretty sure he had a hand in lovely background works like this poster.

The game’s introduction and first act are, for the most part, concise and intriguing. Perils of Man opens with a Rod Serling-like character outlining the mysterious disappearances of two eminent scientists from the Eberling family. Players take the role of sixteen year old Ana Eberling, a would-be scientist who’s cooped up in the mansion with her ghost-obsessed mother, Nadia.

Ana’s mum has not really recovered from her husband’s weird disappearance, and has gradually withdrawn from all outside activities (an abandoned board paints her as a keen wind-surfer, once upon a time.)

When she’s not rather marvellously channeling her inner Lady Augusta Bracknell, Nadia Eberling’s misfortune serves as an early introduction to the main theme in Perils of Man: avoidance of risk to the point of self-harm. Ana is desperate to avoid this fate, providing ample motivation for her to explore the Eberling home and uncover what she can about her father.

These opening sections have relatively straightforward, but sensible puzzles. You need to be able to see in a darkened gallery during a thunder storm blackout, so it’s necessary to find a flashlight. Solving a numerical riddle will grant you access to another, hidden room, and so on. Ana gets to explore the mansion, and players learn about the family history at the same time.

It’s notable that the first segments seem so much tighter than the game’s later acts, because I believe it was these bits (and only these bits) that were released on iOS a year or so ago. The rest has, presumably, been completed in the interim. 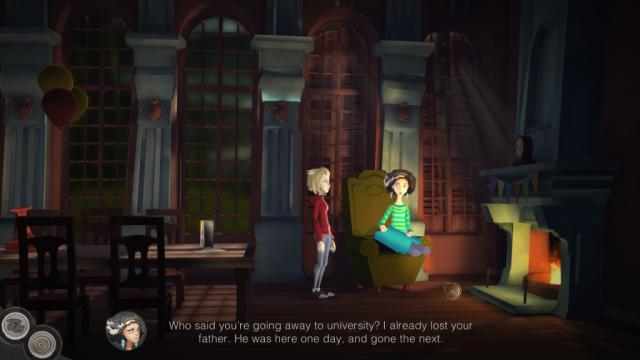 A somewhat barmy solution to operating an out-of-reach lever (when a perfectly functional ladder that I had just used was sat in the room next door) had already caused me some misgivings, but things really begin to unspool once Ana meets up with loyal (if slightly bumbling) bird-automaton, Darwin.

Beyond this point, Perils of Man starts to tie certain puzzle-crucial events to specific triggers in a rather baffling manner. Even when all signs indicate what Ana’s next course of action should be, she might be prevented from actually performing that action (and making you doubt yourself) because the relevant trigger hasn’t gone off yet. There’s a sequence where it’s obvious you need to pick up some loose pipes (the dialogue even outright says this,) but this isn’t possible until a nearby Manager’s office opens up. This only occurs after a lone piece of dialogue with a completely different NPC.

Encouraging players to exhaust dialogue with other characters is absolutely fine, but it’s maddening when the game is heavily indicating one course of action through dialogue but at the same time gating it behind a separate, disconnected trigger.

This has the unfortunate consequence of destroying any lingering usefulness in the Perils of Man hints system. In the example above, the hints system does nothing but confirm that, yes, indeed, Ana does need those pipes. It has nothing along the lines of “maybe I should talk to someone and that will magically make the Manager reappear.” Hints also tend to be myopically tied to the room Ana is currently in, and regularly offer suggestions about puzzles the player has already solved. It’s one of the least helpful implementations I’ve ever seen. 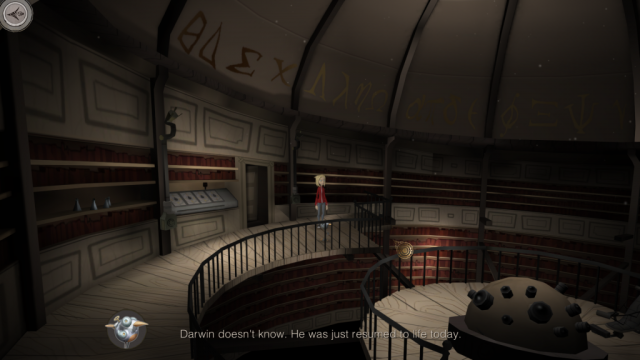 Darwin is usually a little more informed than this.

These kind of oversights crop up throughout the game. From strange, contradictory dialogue options (“Can we get these men to the lifeboats?” “Sure, with an order from the captain” “What’s the lifeboat situation?” “We don’t have any” … alright then,) to jokes that seem to refer to cut scenes (either that or Darwin has this whole skit about British locks that I completely missed,) and absent animation sequences.

I understand that this is probably a consequence of budgetary restrictions, but seeing Ana stood motionless as she ‘uses’ an (apparently invisible) umbrella to knock over another item is a bit underwhelming. She also sometimes likes to float over scenery she shouldn’t be able to walk on; though happily never seemed to get stuck.

This is all most unfortunate, because Perils of Man starts with a lot of promise and does continue to show flashes of decent puzzle design and solid, thematic storytelling all the way to the end. Ana’s enthusiastic voice-acting may not be for everyone, but, aside from a couple of cringe-worthy lines, does a pretty convincing job of portraying a Swiss teenager who’s been all-but confined to her house for the past decade.

There are some neat jokes too, like Ana noting that a medicine cabinet’s “inverted Swiss flag does little to reassure me” or the absurd nature of Darwin triumphantly identifying the culmination of a puzzle as SUFFICIENT HAY. The game also introduces a successful first-person element part way through, which allows players to optionally see the environments in a different perspective and gather additional (actually useful) clues. 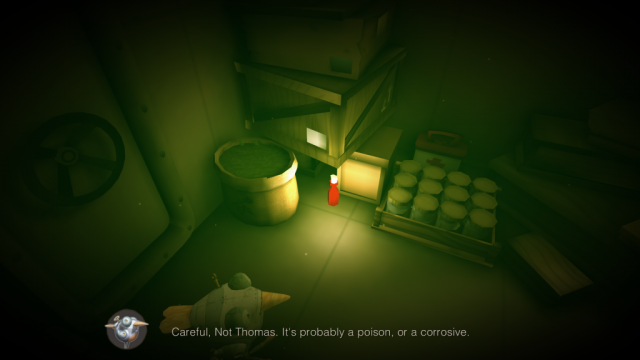 Perils of Man is also not afraid to touch on more serious topics like the effects of grief and age-old philosophical dilemmas about condemning a smaller group of people for the ‘greater good’ of the majority. With more time and a clearer narrative, these aspects could’ve been given much more room to shine.

Instead, it feels like the game had some pretty significant structural re-writes during production. The final scenes feel incredibly truncated (one has clearly been built up to be longer, but amounts to a brief conversation in one location with no puzzles) and the abrupt conclusion is all portrayed in an extended cut-scene.

While by no means a disaster, Perils of Man is all the more disappointing for never repeating the highs of its introduction. Irritating puzzle triggers, animation glitches, misleading or jumbled dialogue options, and a borderline useless hints system all help to undermine that initial fine work. There are glimmers of quality and hope on that downward curve, but, by the end, not even the ludicrous nature of manipulating donkeys to shift the weight distribution inside a boat could penetrate my despondency.

Self-styled worst game of all time, ORION: Prelude, gets updated

Valve and Bethesda to remove paid Skyrim mods, refunds all round

By Greg Bargas17 hours ago
Reviews

By Ashley Mowers5 days ago
Reviews

By Ben Simmons6 days ago
Reviews