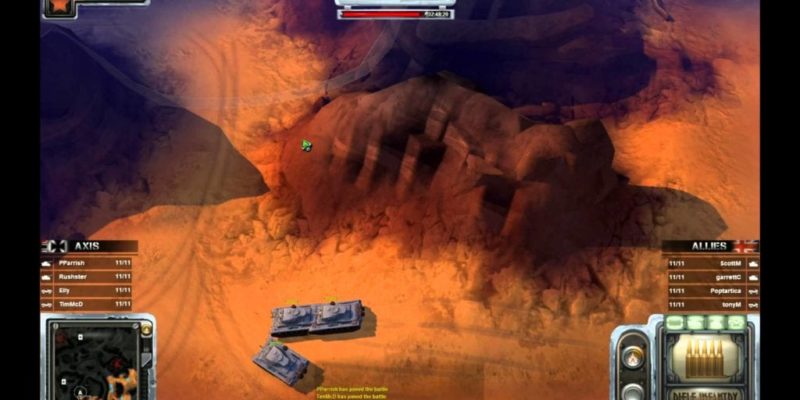 Petroglyph launched their Kickstarter campaign for their tactical online free to play WWII strategy title Victory just over a week ago and it got off to a slow start.

As the week rolled on it became apparent that the project would not reach its funding goal of $700,000 and Petroglyph has just announced the closure of the campaign.

We caught up with the Petroglyph team to find out why they think the Victory campaign failed to capture gamers’ imagination.

First of all, I think people would like to know why exactly you have decided to pull the Kickstarter campaign.

We’ve learned that Victory is definitely not the type of game that the Kickstarter community craves. We’ve received a ton of feedback, and it’s been very helpful and appreciated. A better Kickstarter project for us would be to make a much more traditional RTS game that appeals to the nostalgia of classic RTS gaming experiences from the 1990’s. Fans have suggested spiritual successors to Dune 2, C&C, Red Alert as well as sequels to Star Wars: Empire at War and Universe at War: Earth Assault.

Despite the campaign discontinuing, you have mentioned to us that there are interested publishers. Although the Kickstarter was not going to make it, how has getting the Kickstarter out there helped?

Having Victory on Kickstarter has been a huge help, even though it’s not the right fit for a KS campaign. We’ve had multiple potential publishing partners approach us with great interest in the game – and we’ve already had some great play sessions with them. Even though Victory will not be funded from Kickstarter, it looks like there’s a good chance we will still be able to release it.

Obviously with some of the names involved with this project and the projects they have worked on in the past, gamers interested in Victory will have certain expectations. Do you think that this may have been an issue with this campaign?

It certainly appears that the Kickstarter community expected a different kind of game, something that goes back to our roots in strategy gaming.  Mismatched expectations may have played into the level of support Victory received on Kickstarter.

Do you think that perhaps people would understand it better if the game was more of a traditional RTS such as C&C?

Yes. We should have targeted something more traditional and nostalgic. You never know until you try something. While we were unsuccessful with Victory on Kickstarter, we learned a lot!

Although EA owns the rights to the C&C franchise now, had you considered looking at a pseudo-reboot with a different back story, game world, etc? There seems to have been a lot of interest in something like that from the community following the announcement of Victory. After all, games on Kickstarter seem to do well when they are similar to a popular franchise from the past by the same team, or at least some of the team.

Absolutely, and there are a lot of cool settings that we could consider. A lot of people have mentioned that they’d love to see more in the Star Wars: Empire at War series, which was a ton of fun to work on. Of course, classic Westwood RTS games have been mentioned, too, as we’d expect.

There are free-to-play games that have been crowd-funded but there seems to have been a concern or perhaps misunderstanding that Victory was a 100% pay to win game?

Yes, that was definitely misunderstood. Since launch, we’ve posted updates to help clarify it. That said, Victory should have been positioned as a traditional RTS game, with all the expected features and a solo play campaign. Live and learn.

We hear often from developers that one of the hardest parts of creating a Kickstarter is conveying the message of what the game is actually about. Chris Taylor and Gas Powered Games springs to mind with Wildman. Do you think you may have fallen into this trap from the get-go?

We believe that, for the most part, we clearly communicated what the game was about. It just was not the right fit for Kickstarter and the Kickstarter community.

Do you think you will have to rework the game’s F2P model now or will that completely depend on the publisher you may get involved with moving forward?

We are proud to say that we had a lot of people play Victory with us who loved the core gameplay. While we would like to keep the heart and soul of the game intact, we are currently discussing options about the surrounding meta-game and monetization model. Free-to-play is a really good fit for an online server-based game, but not so much for a more traditional strategy title.

If you do manage to secure a publisher, do you think that will give you the chance to expand the concept even further beyond what you had initially planned with the Kickstarter campaign? Is that something you will push for?

Absolutely. World War II encompassed many fascinating locales, factions and unit types. It would be our goal to continually deliver new, fresh and fun content on a regular basis. Expansion is something that we’ve planned from the very beginning. We love the game and want to keep working on it.

Finally, have you any advice you may want to pass on to developers who are thinking about getting a Kickstarter project off the ground?

Yes. Go for remakes of classic gaming experiences that people have loved in the past! As members of the Kickstarter community ourselves, we’ve also backed these types of projects. Many of us have fond memories of past-generation gaming experiences, and look forward to these successors so we can relive them.

Despite the closure of the campaign Petroglyph continue to develop Victory and the IncGamers team took time out to take them on in a few 4v4 matches this evening.

Lucy Bradshaw’s “straight answers” on SimCity being online only