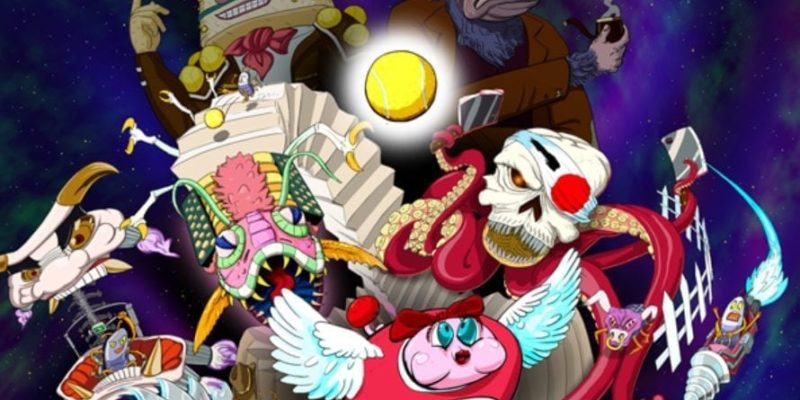 You gotta love it when a game’s premise is explained in the title. The biggest core tenet of Pig Eat Ball is that you’re a pig who completes levels by eating tennis balls. On various themed space stations. And the pig’s father is a king with a cake for a head. Simply put, this game is insane, and I mean that in the best way possible. Mommy’s Best Games did a knockout job with this one.

Pig Eat Ball‘s story is simple. The titular pig is named Princess Bow, and her father is the king of the space stations she lives on. Her father decides it’s time for Bow to be married, so he announces a set of games. The winner will get Bow’s hand in marriage and live happily ever after. Naturally, Bow has other plans. She herself takes part in the games with the best disguise imaginable: a pair of sassy glasses. Along the way a conspiracy unfolds, and it’s up to Bow to save the day.

If that all sounds super weird and zany, that barely scratches the surface. Pig Eat Ball is an extremely strange, off-the-wall game. The graphics immediately sell the concept as well. Everything is rendered with bright, colorful sprites with a ton of personality. Absolutely everything has a cartoony aesthetic that made me feel like I was playing a cartoon from the mid-90’s. The sound is equally stellar, with a ton of fun songs and fantastic sound effects. Simply put, they did a wonderful job with this game’s presentation. 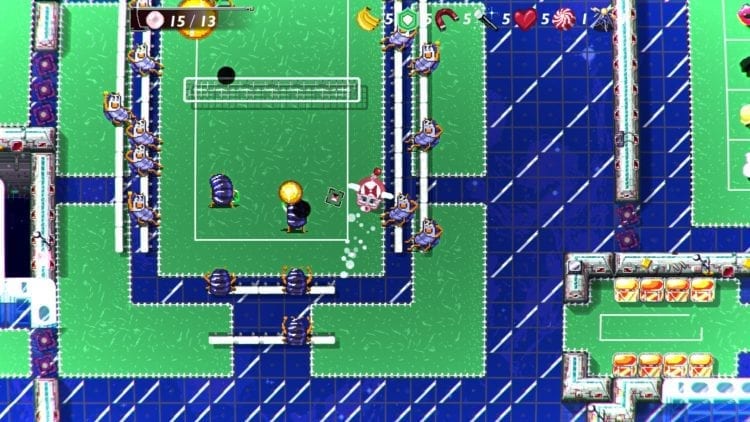 This Game Controls Extremely Well – Too Well, Even

That wouldn’t mean much if Pig Eat Ball didn’t have the gameplay to back it up, but boy does it ever. Bow’s primary moveset involves constant suction that she uses to eat the balls. The more balls she eats, the bigger she gets. She also has a boost with three levels of speed. When Bow gets hit, she involuntarily vomits after a set amount of time.  If she eats three vomit-covered balls too quickly, she’ll vomit again. She can also vomit at will, which is useful for the game’s many conveyor puzzles and squeezing through tight spaces, as well as being nasty as hell. Bow can even grab items and then fling them around, either at enemies or obstacles.

Thankfully, the controls are extremely tight and precise. Everything is responsive and allowed me to maneuver in very specific ways in order to face Pig Eat Ball‘s challenges. The feeling of doing donuts while speeding around the game’s levels is really delightful and satisfying, not to mention hilarious due to Bow’s face at her highest level of boost.

As stated previously, the levels always boil down to collecting all of the tennis balls. Sometimes there are restrictions, like a number of hits you’re allowed to take or a time limit. Additionally, each level comes with three medals. If you get gold medals in each level in one of the game’s five zones, you unlock a super tough challenge set. 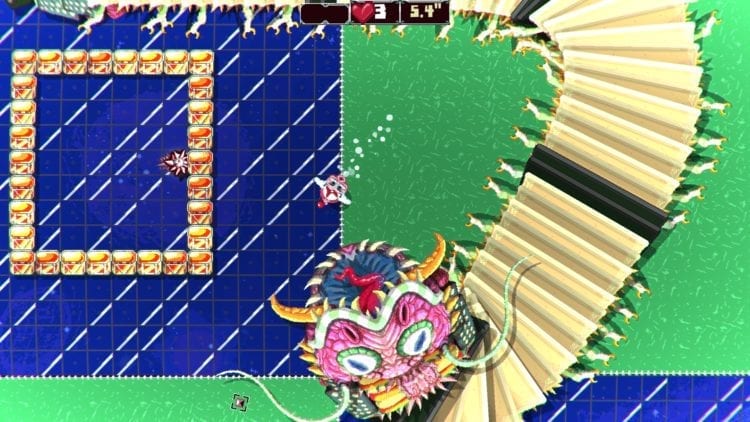 Like Creative Levels? Then Get A Load Of These

Each set is comprised of one to five levels. Once you beat all of these levels, you get a pearl. Once you get all of the pearls in a zone, you go on to fight a boss. Much like the rest of the game, the bosses are wildly imaginative and have fantastic designs. The first boss of the game is a giant accordion caterpillar. When it moves, it makes a tuneless accordion sound as it chases you across the room.

The most impressive thing about Pig Eat Ball, though, is how absurdly creative it is. Although you’re always collecting tennis balls, the way you do so varies wildly from level to level. For instance, the first zone is a giant tennis court. This comes into play mechanically by requiring you to guide balls to tennis-playing bugs who then hit them away. Each zone brings new mechanics that it very intuitively teaches you in the hub. Every new mechanic shows up organically right before you need to use it, which works beautifully.

Every aspect of the game’s design is clever and well-thought-out like this. And the creative additions seemingly never stop coming. It’s extremely rare to get burned out on any one thing due to the frequency with which new things are introduced. One minute you’re pulling tennis balls to bugs, but a few minutes later you’ll be interacting with a number-based floor barrier. There are just so many brilliant, interesting mechanics waiting around every corner that I could hardly believe it. Even at the end of Pig Eat Ball, I was marveling at the brand-new ideas on display. 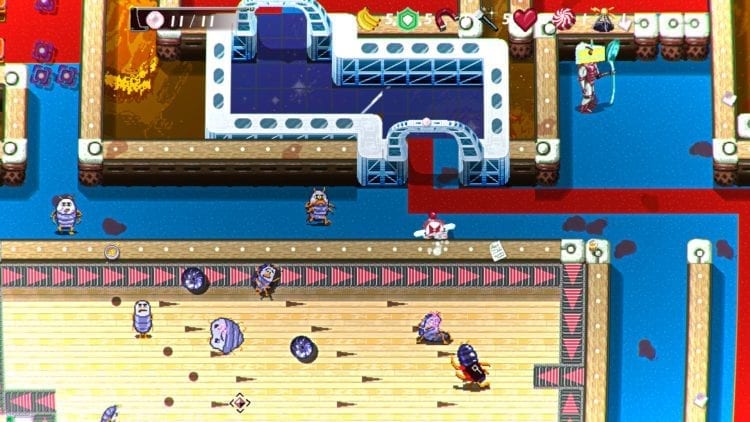 I’m not sure what’s going on here, but I AM sure it’s hilarious.

Much Like Goldilocks And The Bed, The Difficulty Is Juuust Right

Difficulty-wise, the game is really even for the most part. The game’s difficulty curve is smooth and does a great job of leading into what comes next. That isn’t to say there aren’t a few outliers, though. Some levels are so hard that they took me as long as two separate level sets. One late-game level revolved around using mechanical charging bulls to follow you and break gates blocking your path. To me, it was hands-down the most difficult time I had on a non-optional part of the game.

For players who are having trouble or who aren’t as skilled, however, each level offers an easy mode that unlocks after you fail or beat it. I only had to use it outside of optional levels that one time, but I was very glad it was there. Overall, I was really happy with the level of challenge Pig Eat Ball offered. And going after gold medals is definitely a great challenge for anyone who wants more. The level sets that unlock once you get a gold medal in every level in that zone are no joke, though.

I only unlocked the first challenge set, and it was, as you’d expect, extremely difficult. It’s unlikely I would have even been able to beat it had I not been hit with some sort of glitch that somehow automatically beat the level for me. I definitely want to see more of these challenge sets, though, so I’m going to go back in to chase down some more gold medals soon. 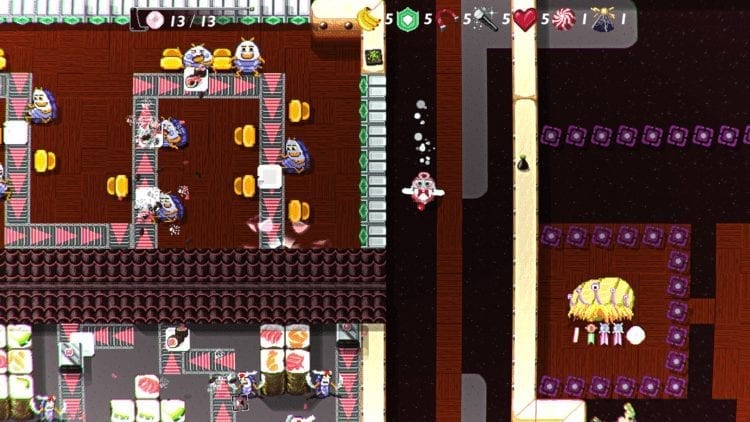 Anybody for sushi made by giant bugs? Anybody?

My Favorite Disguise Is A Ghost Sheet That Turns Bow Invisible

Now, there are two things that can help tremendously with getting gold medals: power-ups and disguises. The hub areas are covered in challenges and puzzles that give you both. While I didn’t once feel the need to use power-ups, I’m sure many players will find them useful. Disguises make a massive difference in terms of getting gold, though. However, some of these challenges are so tough that I couldn’t figure them out.

All-in-all, I unlocked about half of the game’s disguises and got all gold medals on only the first zone. After completing the main story and doing a fair amount of side stuff, I have about 16 hours in the game so far. Case in point, this game represents a really good value. There’s simply a ton of stuff to do and see and playing levels again is very incentivized, not to mention fun with new disguises.

On top of all that, players can design and upload their own levels. As I played prior to release, I didn’t get the chance to see any of these. However, I’m looking forward to coming back in a month or so to see what shenanigans other players create. There’s also a multiplayer mode where players can compete with one another. So, yes, this game really has a ton to offer. 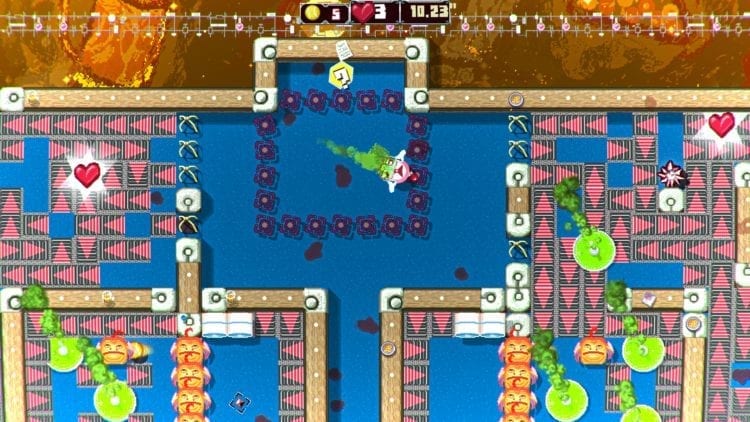 I think I’m gonna be sick…

Pig Eat Ball is easily one of the best games I’ve played this year. Hell, it’s just a great game in general. Anyone who enjoys zany, creative games will probably find a whole lot to like here. In the end, this is an extremely fun, lengthy, and unique experience, and I’ve never seen anything quite like it before. Now, if you’ll excuse me, I need to go work on getting some more gold medals.