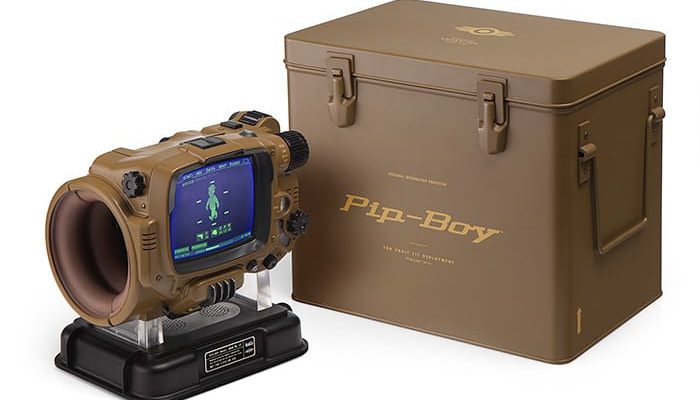 The Fallout 3 Pip-Boy was a great collectible when Fallout 4 was released but there’s now a new one that’s even more advanced.

The original Pip-Boy required a mobile phone to function but the new Pip-Boy: Deluxe Bluetooth Edition is a complete standalone piece of kit with an integrated screen and on-board Pip-OS software. The dials and knobs on the device are not purely cosmetic, they all have a function. It also comes with a stand which can be used to charge the device and be used as a speaker.

There is one big snag and that’s the price. The device is being sold exclusively through Think Geek and it costs…wait for it…$349.99.  Think of it as a rather large smart watch.

With an integrated screen and its own on-board software and hardware, this Pip-Boy pairs with your Bluetooth phone or tablet to give you access to your phone’s ability to take and place calls, as well as its contacts, SMS messages, and audio files. Even when not paired, the Pip-Boy: Deluxe Bluetooth Edition can still be used as an alarm clock or a cosplay prop, displaying the Status, Special, and Perks screens from the game. Oh – and did we mention that the knobs, dials, and buttons actually work?

Designed to fit most human arms, the Pip-Boy: Deluxe Bluetooth Edition is lined with foam for a comfortable custom fit. Weighing in at just about 2 pounds, the Pip-Boy ensures you know won’t forget it’s there and ready to assist you, but it’s not uncomfortable. And there aren’t any nasty biometric seals on this one, we promise.

The Pip-Boy: Deluxe Bluetooth Edition comes with a genuine RobCo Industries stand that doubles as a charging base and more powerful speaker option when the Pip-Boy is in place. The compartment on top opens to reveal a holotape that’s a USB drive. And it all ships in a Capsule-Case-inspired tin designated for Vault 111 deployment.

With this Pip-Boy: Deluxe Bluetooth Edition all the answers are in sight!

The device is expected to ship on 11 November, and if you really are Fallout 4 mad, then it add it to the Christmas shopping list. Only 5000 of these are being made so keep that in mind.

E3 2016: Lawbreakers Demands to be Noticed