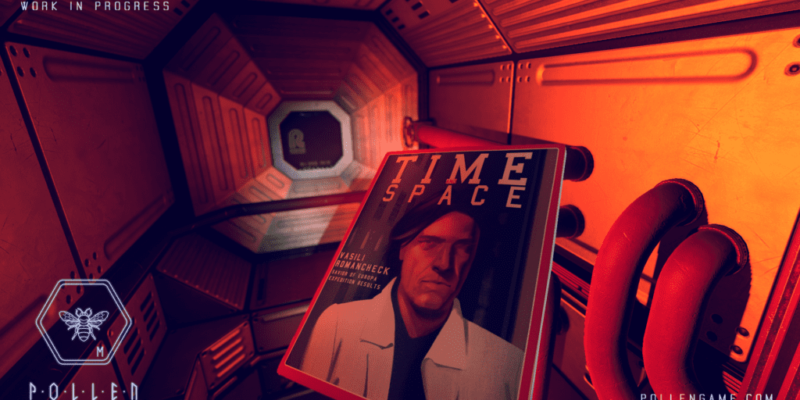 As the crowds gathered to check out the new Oculus hardware on the Gamescom show floor, there were developers tucked away in small booths ready to demo their VR games. One such developer is Mindfield who have been busy working on Pollen, a game which can best be described as a VR adventure aboard a space station. Mindfield’s Olli Sinerma and Ville Kivisto were on hand to walk me through a demo version of the game and also demonstrate how the game works in VR.

VR is on the cusp of exploding with the release of consumer hardware this year, and regular readers will know I’m extremely sceptical about how good it actually is. Whether it’s going to please everyone remains to be seen, but developers like Mindfield are more than aware of its limitations with motion sickness being a major problem they are struggling to overcome. After all, a developer can’t quite tap into the human brain to stop it. Not yet, anyway…

We were introduced to the futuristic world of Pollen, a game that’s being designed with VR in mind – although Mindfield stressed that there’s just as much enjoyment to be had from the game by playing it on a standard monitor. Still, with VR being a big selling point for Pollen, Mindfield has made sure that all the textures and environments look sharp when playing in this fashion, and they’ve done a fantastic job because when viewed on the DK2 it does indeed look great.

Pollen is about exploration: think of it a little like Gone Home in space, with the developers giving you the opportunity to interact with just about everything in the environment. All the objects you discover can be picked up, moved, used and inspected as you look for clues. Mindfield hope that the player’s imagination will help shape their adventure experience by trying things out with all the objects and features they encounter in the environment.

The interactivity of the environment is impressive. I walked over to a microwave, opened it up, turned it on. There were all kinds of clues on clipboards lying around the station, and you can actually read them in the VR display which makes a nice change. There was a Polaroid camera we could take a picture with, then we could stick the picture to the wall. Perhaps this could be a great way to highlight where you have already been as you traverse the environments? We’ll find out soon enough. 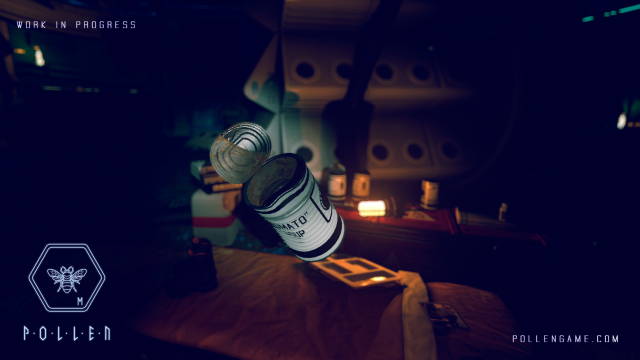 There’s more than just pure exploration, though, with environmental puzzles that allow for plenty of solutions, as demonstrated by an encounter with an electrified floor. Do you find something to create a bridge to walk over it? Do you hunt down a power switch? Or do you search out another solution? It’ll be up to the player to figure out, but there’s definitely more than one way to make it across.

With a DK2 strapped firmly to my face I was handed an Xbox controller which allowed me to move about. Using the triggers, I could interact with the objects and rotate them to get a better look which is particularly handy because you never know where clues might be hidden. The level of interaction is impressive; I was pulling cans out of cupboards, placing them on the side, and was even able to stack them on top of each other. Okay, that’s probably not particularly useful, but the fact that it was possible demonstrated how interactive Mindfield want the Pollen environments to be.

Developers of VR games have real ambition, they know what they want to make but the hardware to provide that experience is not always there yet. I asked Olli and Ville what hardware out of the current crop of future offerings they were most impressed with and what would work best with Pollen. The general consensus is that the HTC Vive is looking like the more impressive hardware thanks to the positional tracking system – at least as far as Pollen is concerned.

This makes sense when you think about what Pollen actually is. It’s an adventure experience encouraging you to explore the environments. Mindfield want to stress than this is not a horror game and there are no jump scares (sorry, YouTubers) – it’s more of an exploration and adventure experience.

Having messed around in the DK2 now for quite a while, I was impressed with what Mindfield have so far achieved. The environments look great and playing with the objects within the environment is bizarrely fun. All of that said, I did experience motion sickness when I decided to walk up some stairs, and the guys said that this was a common problem. Still, this can be played outside of VR too, so there’s always that option if the Vive or new Rift can’t resolve the problem.

Pollen looks like an ambitious game. Using VR as a primary selling point is risky, but any developer willing to take that risk should be praised.

Resident Evil 2 is getting a remake