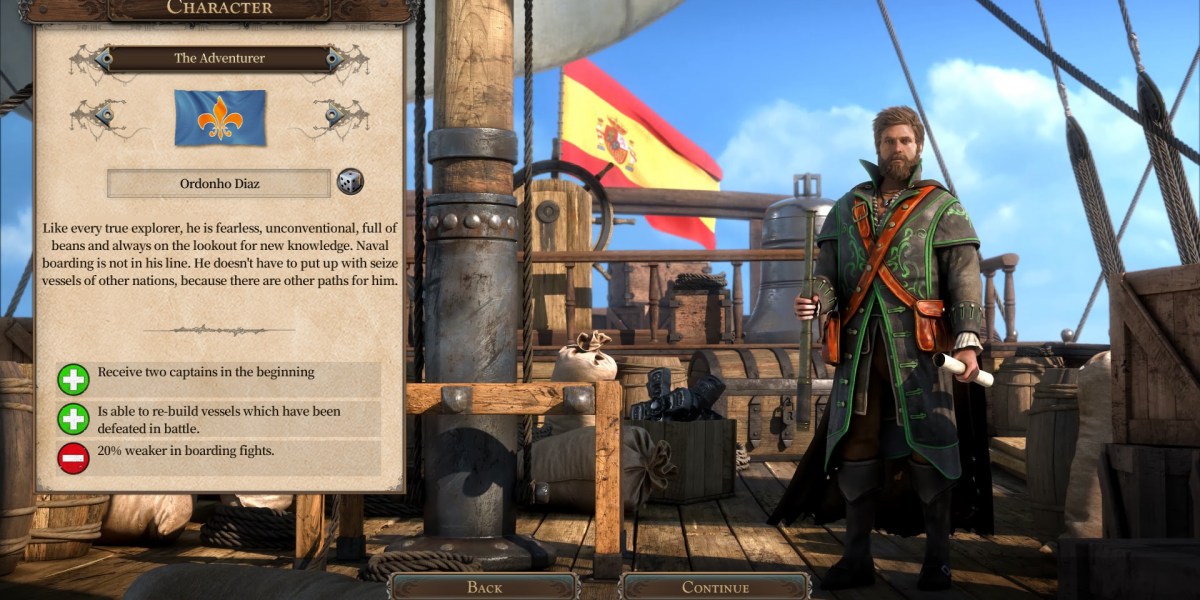 Do you want to be a pirate? What do you mean “no, I want to be a trader?” Well, you can do both in Port Royale 4. It’s the Age of Sail, lads! That means exciting colonial adventures for the rich folk, plenty of opportunities to die in humid swamps for the commoners. And a lot of work for anyone who has sea legs.

In particular, you can set out as a trade company manager working for one of the major powers trying to settle the area between Florida and Brazil. Your main job would be to ferry goods between towns – though you can make some criminal buck on the side.

Just like usual for this type of game, you’ll spend most of your time in the strategic view, with the sea and the coast in front of you. The towns belonging to your country are already revealed, the ones settled by the enemy are not. With that, it’s time to make some money. 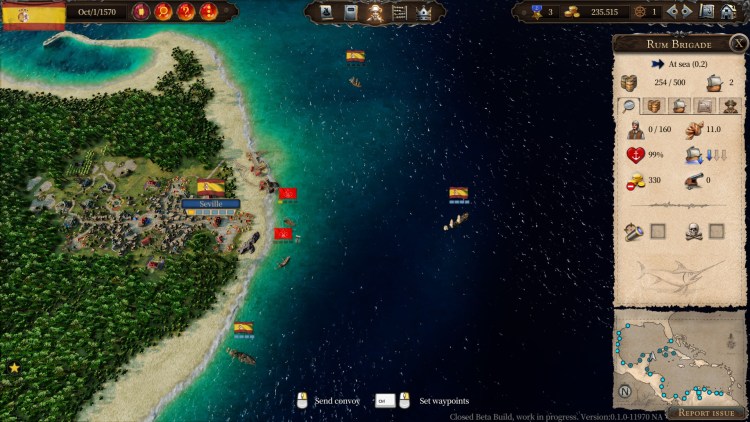 Sail the odd number off seas that’s more than 6 and less than 8!

But you don’t start with a single ship in Port Royale 4. No, you’re more than likely to have a convoy of a couple of bots under your wing. For you see, automated convoys are the key to the making the big doubloons. Sure, you can run the convoys manually. Select it, order it to sail to a town, open the settlement interface, buy some of the local specialties, sell whatever sells high, and move on. That’s a great way to make some money, but we’re thinking large. 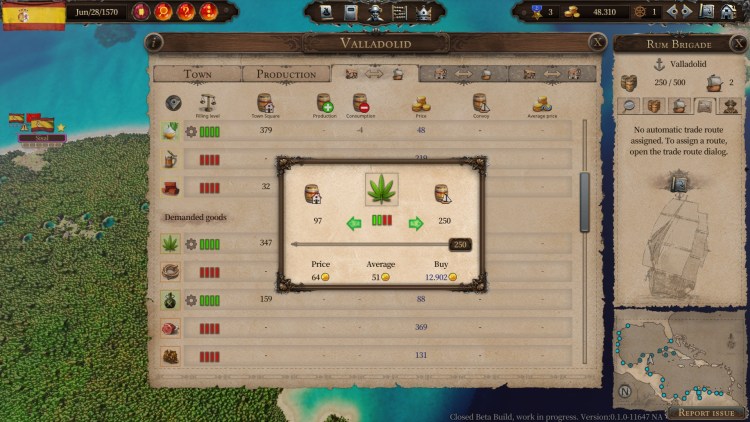 That’s why you need to set up routes between towns and assign them convoys. Each town has certain goods that it produces, hungering for what it can’t make itself. These commodities are tiered, with the first tier containing basic food stuff and material inputs. But as the towns grow, so do their appetites. And the way to have a good stable income is to connect a few towns with trade routes. Hopefully, you took the wind direction and draft of your ships into consideration.

Too bad the route interface in Port Royale 4 isn’t the greatest. Once you slap down some towns into a route, you go into managing what gets bought and sold where. Usually, the calculus is easy: buy whatever the town produces and sell whatever you bought in the other towns. Unfortunately, there’s no way to do such simple settings automatically. So you have to go set sell/buy orders for every town on the route. At least the interface shows if you already set goods to be picked up or sold at other towns on the route. 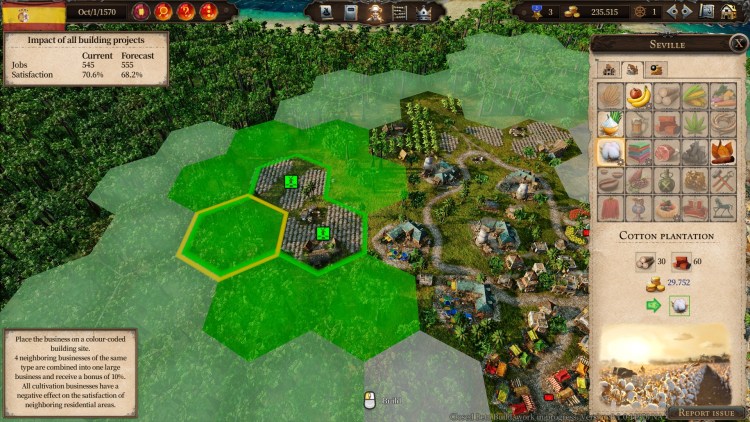 You can also invest in the manufacture of things to trade.

Well, supposedly you get the hang of it and your convoys are now out and about, transporting wood, meat, rum and other necessities. What do you do now? Well, you can still have a convoy to boss around by yourself. It’s useful for when you accept randomly-generated quests from towns – those usually require a delivery of a specific number of goods, but more esoteric tasks are also available.

Limping back to Port Royale 4

You can also use this to get in trouble. Sure, most of the ships you can have are unarmed traders. They’re somewhat cheap to run and don’t require captains (who require license from the viceroy) to command them. But once you get a boat with some crew (hilariously, crew exists as a thing in the game, but you can get along without them?) and some cannons, you can go fight pirates, be a pirate yourself, and do other kinds of shenanigans. 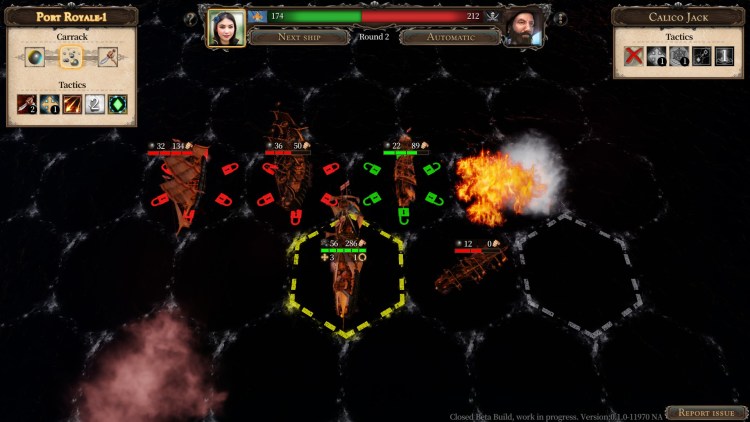 Too bad the turn-based battle system is not exciting at all. In Port Royale 4, the turn alternates between the sides. You move one, the enemy moves one. A ship’s stats determine how fast it can move and how much it can turn per hex. The goal is to get in position and shoot the enemy boat. And since each boat has two broadsides, the desire is to get to fire both during the turns. You also have powers you can use – some are consumable, gained from carrying out the missions I mentioned before.

Maybe it’s that Port Royale 4 is early in development, but I haven’t been so underwhelmed with ship battles since Sid Meier’s Starships. There’s no visual nor audio impact to battle, and even the tactical play doesn’t excite me at all.

Another problem exists on the strategic map. Port Royale 4 really, really wants you to move those commodities, because people start leaving towns as if the plague is upon them. So it feels like you have to juggle some spinning plates there, trying to keep the blighters on your route sedentary and working those industries. Population shrinkage actually cuts down on the types of resources the towns produce. 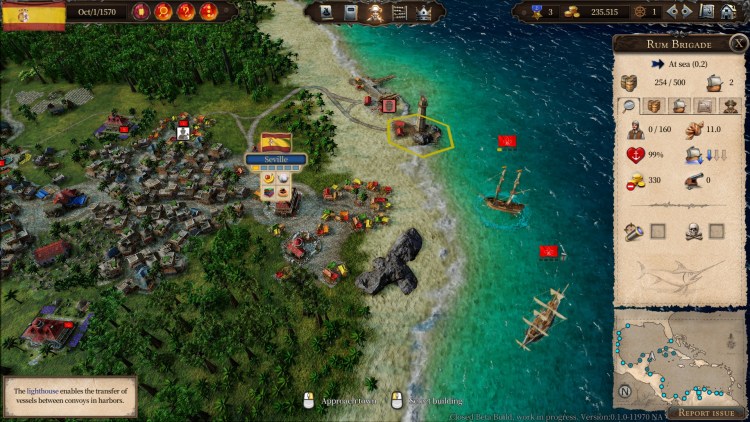 The futile task of keeping European settlers from running away into the jungle.

Meanwhile, you have your campaign mission goals. Some are about population happiness in your main town (it’s where you start with not only the trade license, but also the remit to build whatever buildings you want). What the game and its many tutorials fail to point out is that you have a time limit. Didn’t establish those four lumber mills in time? Campaign over — pack it up, boys!

But none of the issues I mentioned are impossible to overcome with more development. A lot of it is about tweaking the numbers behind the scenes. And seeing how Port Royale 4 is not the developer’s first rodeo, they can still pull it through. When time comes to release the game, we’ll see if it did.

Ion Hazzikostas discusses how World of Warcraft community has evolved

Arnold gets back into the action in Predator: Hunting Grounds DLC