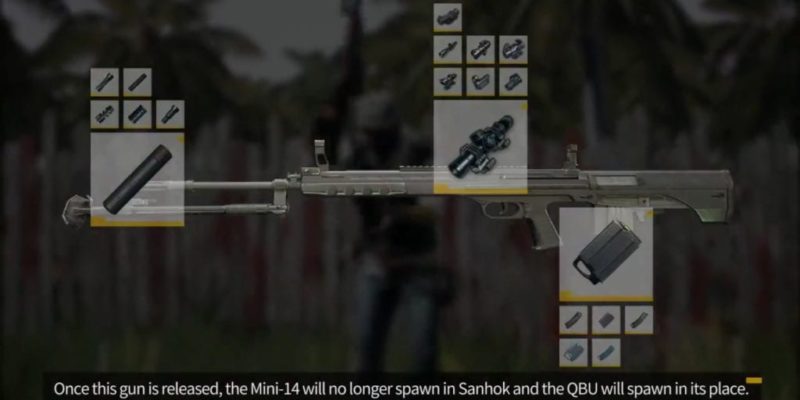 There is a new gun coming to PlayerUnknown’s Battlegrounds soon. According to the game’s official Twitter page, PUBG‘s new gun is the QBU is a designated marksman rifle — not unlike the SKS and SLR — that features a built-in bipod for increased accuracy while prone.

The QBU will only spawn on Sanhok, PUBG‘s 4×4, action-oriented map. It will replace the Mini 14 once it’s fully implemented to the game and is geared toward mid-to-long range encounters. Like the Mini 14, the QBU is semi-automatic and fires 5.56mm ammunition.

The QBU is a new 5.56mm DMR coming exclusively to #Sanhok. It features a bipod, which will greatly reduce recoil when shooting from the prone position. The QBU replaces the Mini14 on Sanhok.

The QBU will be available for testing very soon! pic.twitter.com/fqPsp4wA8t

From a pure numbers standpoint, the QBU and Mini 14 are nearly identical. The guns have the same recoil and ballistic characteristics, although the QBU does slightly more base damage. However, despite its base similarities to other designated marksman rifles, the QBU’s bipod.

When going prone and firing the weapon, the QBU has reduced recoil, allowing players to quickly — and accurately — shoot multiple rounds at targets. The bipod does have some distinct weaknesses, however, as the QBU has a lower damage rating than other marksman rifles.

Based off of its reveal, it looks as though the QBU will encourage a hybrid playstyle. Surviving on Sanhok is all staying mobile, so the addition of a long-range rifle with a bipod means players will have to be aware of their surroundings before laying down to take a few shots. How it fits into PUBG‘s ever-evolving meta remains unseen, but the QBU will be coming to test servers sometime soon.