Rainbow Six: Siege is a game about two sets of five people who are dangerously possessive about one man. I’ve decided to call him Carl. Carl is a hostage and, apparently, very precious to both groups. He either knows how to cure cancer, or just has a really lovely personality. Whatever the case, everybody wants him.

The first set of five have tied Carl up inside a house and are prepared to defend their right to be near this incredible guy with their lives. Meanwhile, the other gang of five are trying to break in. It may appear that their intention is to ‘rescue’ Carl, but in actual fact they just want to take him to a house of their own and start the whole process over again. 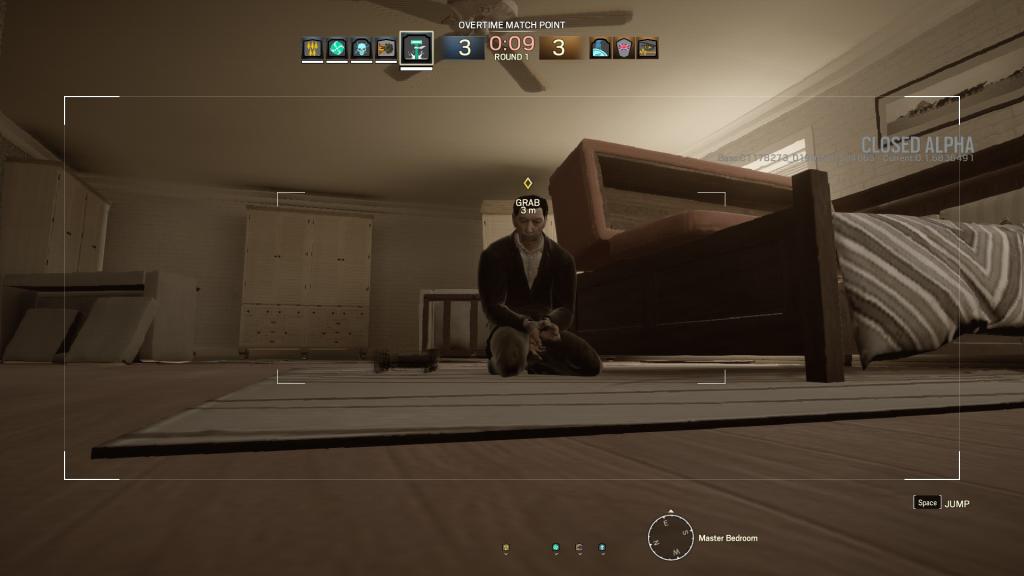 Shhh … we’ll have you out of here soon, Carl. And then we’ll put you in a house of our own.

This 5v5 mode (and the house map) is the one and only match type available in the Rainbow Six: Siege alpha build. [Edit]: Apparently there’s also a map set on a plane. I never wound up on this one, sadly.

You’ll also probably notice in the images dotted around the place that some of the textures are a bit rubbish at this early stage. The game is not expected until late 2015 (at the earliest,) so that’s all fine. It’s pretty debatable what ‘alpha’ and ‘beta’ builds even mean any more when they’re available to the public, but this feels broadly like a (proper) early beta; one mode, basic mechanical functionality, some janky animations and occasional weirdness.

Enough to get a reasonable sense of what Rainbow Six: Siege – Secure The Carl Simulator is going for.

No matter which side you’re on, each match starts with character selection. There are some named ‘builds’ available that, once selected by someone, are no longer an option for other players. When this system was announced, we speculated that the game might have a bit of MOBA ‘hero’ influence. Having now played the alpha, I’m not sure that’s quite the case. 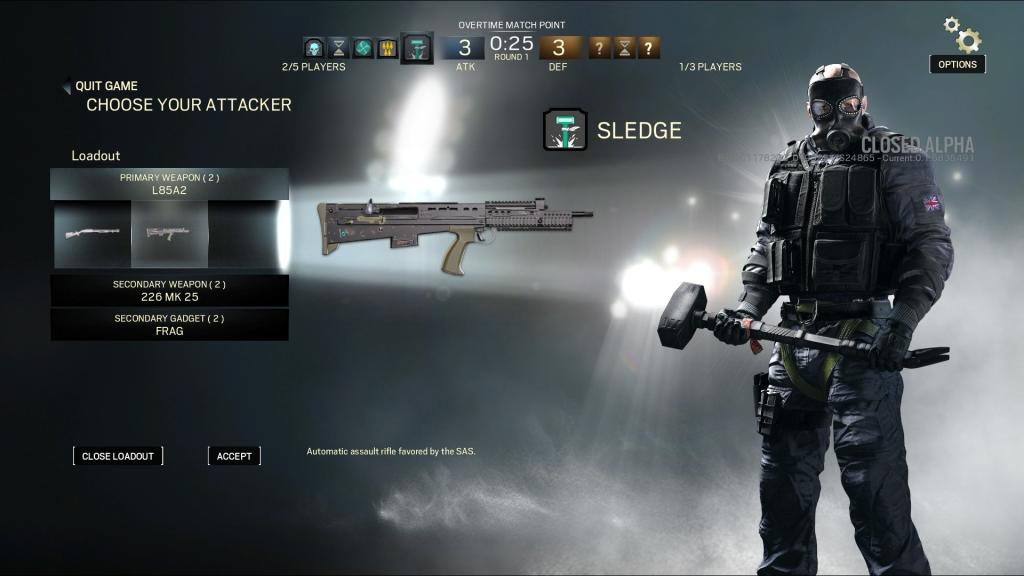 It’s true that in this alpha only one person on the hostage rescue team can be the burly bloke who uses a hammer to smash through blockaded windows and doors. But everyone can choose the ‘recruit’ option and select a (limited) loadout. Since Rainbow Six: Siege is clearly going to feature experience point based progression (you get xp awards in this alpha, it just doesn’t really go towards anything yet,) I’d hazard a guess that the ‘named’ builds are just there for convenience while people are lower levels.

Of course, that may also be completely wrong – and perhaps the generic non-named loadout choice never gets access to some of the tools used by the others.

Anyway, once characters and load-outs are selected the Carl-hogging team get to select a room in which to situate their special little guy, while the Carl-collecting squad are able to choose where to spawn outside. It’s a democratic process, so the majority vote carries the day in each case.

After that, the team inside the house enter into a barricading phase and those outside get to send adorable, remote-controlled buggies to zip around the premises and look for Carl. These events happen at the same time, so the hostage takers should be looking out for hotwheels to stamp on (or electronically block) while they’re dropping down barbed wire bundles on stairs and prepping remote gas grenades. 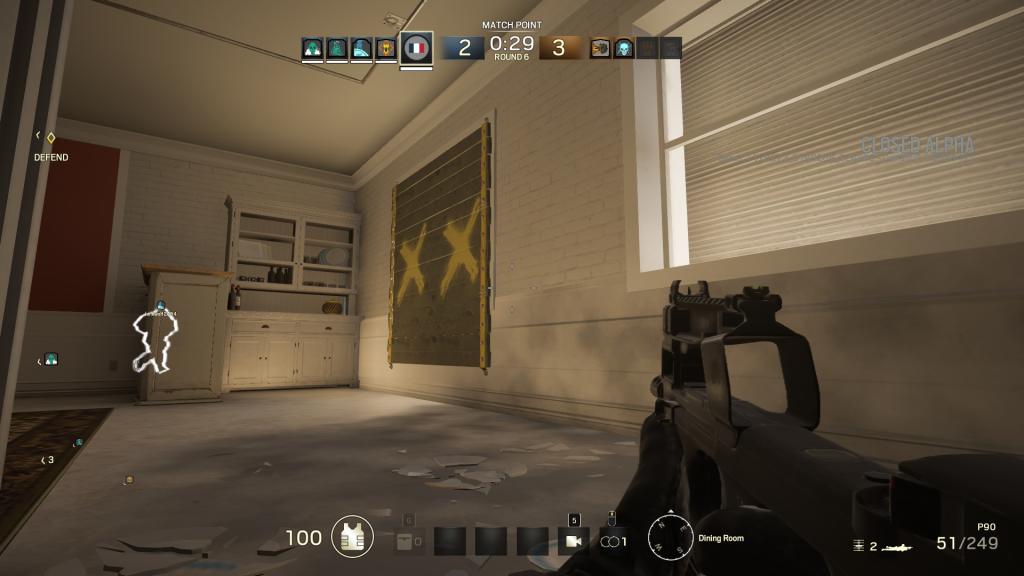 One barricaded window, one unprotected. No safety.

Once that’s all sorted out, it’s time to assault the house and/or sit tight in your little hidey-hole. Or, if you’re new, manage to get shot while running towards the house, or shot through a window at some crazy angle by a guy rappelling in a prone animation up an external wall. That’s not really a complaint, because the early alpha clusterfuck nature of the game gives it a certain charm.

Siege is a rather clever subtitle, because it acknowledges that life is going to be rough for the defending team as well as the attackers. It’s not exactly medieval-era subsisting on rainwater and leather, but no matter how many window blockades you’ve put up, you’re definitely not safe. Aggressors potentially come from anywhere, including through the walls if they’re packing some explosives. It doesn’t seem possible to blow up a ceiling (yet,) but the way things are set up the game seems perfect for that to be a viable tactic at some point.

Hopefully, because blowing holes in random bits of scenery to keep hostage-takers on their toes is quite entertaining.

The people defending the building should have all the advantages (and when people get better at figuring out when and how to use some of the special defensive equipment, that may be the case) – but right now they seem just as vulnerable. Rainbow Six: Siege is rather good at making the team surrounded by four walls feel just as exposed as those on the outside. 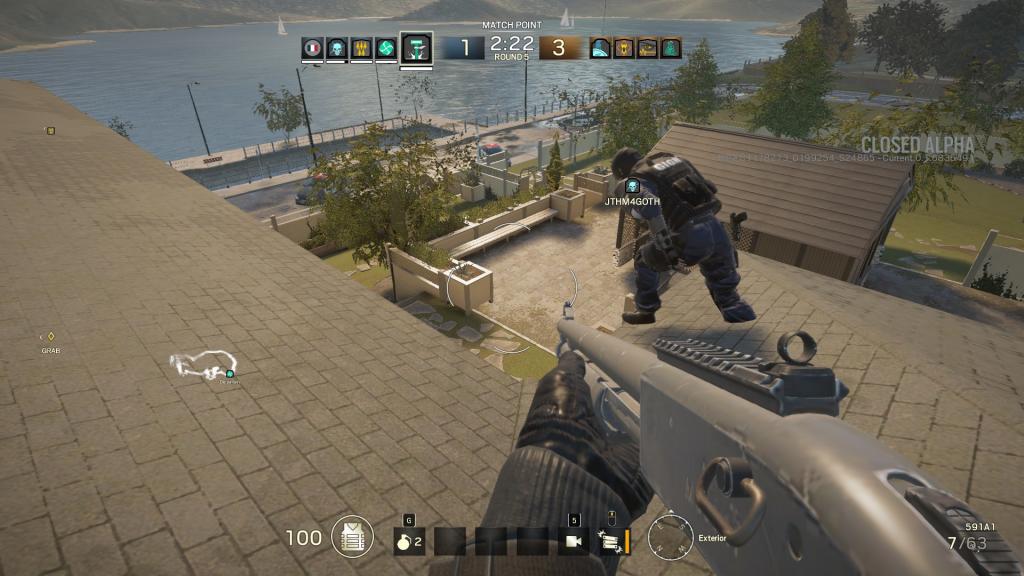 With such a truncated look at the early, chaotic stages, it’s not easy to predict where Rainbow Six: Siege will end up. The intent (for this mode, anyway) would appear to be for organised squads of five to hook up with voice chat and initiate surgical strikes on laundry rooms and workshops. Assaulting squads are supposed to use their tools to scout out the area as clearly as possible, then follow up with a plan. Maybe some timed, breaching explosions (perhaps with some rappel-powered window smashing.) Whatever the approach, it should end with a choreographed hail of gunfire that murders everybody in the building except Carl.

The current alpha reality is more like people just doing their own thing and screwing around with the mechanics and gadgets. That’s as you’d expect at this stage, but it doesn’t cast much light on whether sustained, serious team-play (which appears to be the intention, long-term) will emerge from this crazy, Carl-capturing anarchy.

Rainbow Six: Siege is currently scheduled for a late 2015 release.

Path of Exile: The Awakening closed beta gets an FAQ – Desync possibly fixed?

Knee Deep gets a crime scene trailer, heads to Greenlight

By Robert Workman5 days ago0
Previews

By Robert Workman5 days ago0
Previews

By Tim McDonald6 days ago0
Previews