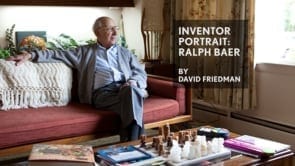 Ralph Baer, widely renowned as the father of video games, passed away last December 6. He was 92.

Ralph was born in Pirmasens, Germany, but his family being Jewish, they immediately left the country to avoid persecution, and managed to do so before Kristallnacht. Moving to New York, he studied in the National Radio Institute and actually served under the Allies as a technician during WWII.

Baer had two major inventions earning him his famous moniker. First, he developed the Black Box, the first actual device that could connect to a TV and be used to play games. This was in 1966, while he worked for a military contractor, Sanders Associates.

In an interview with Develop magazine in 2008, Baer had this to say about the possible inevitability that tech would have led to games without him:

No inventor can foresee the full extent of where his or her invention may lead and often enough the process winds up creating products or services that were far from the inventor’s starting point and initial intent.

Baer’s console was to be overshadowed by Atari’s Pong and Atari 2600 consoles, but perhaps in an act of sweet revenge, Baer would take Atari toy Touch Me, and create a more popular and renowned product, the musical game Simon.

You can watch Baer’s last interview from two years ago, still working at the ripe old age of 90, below.