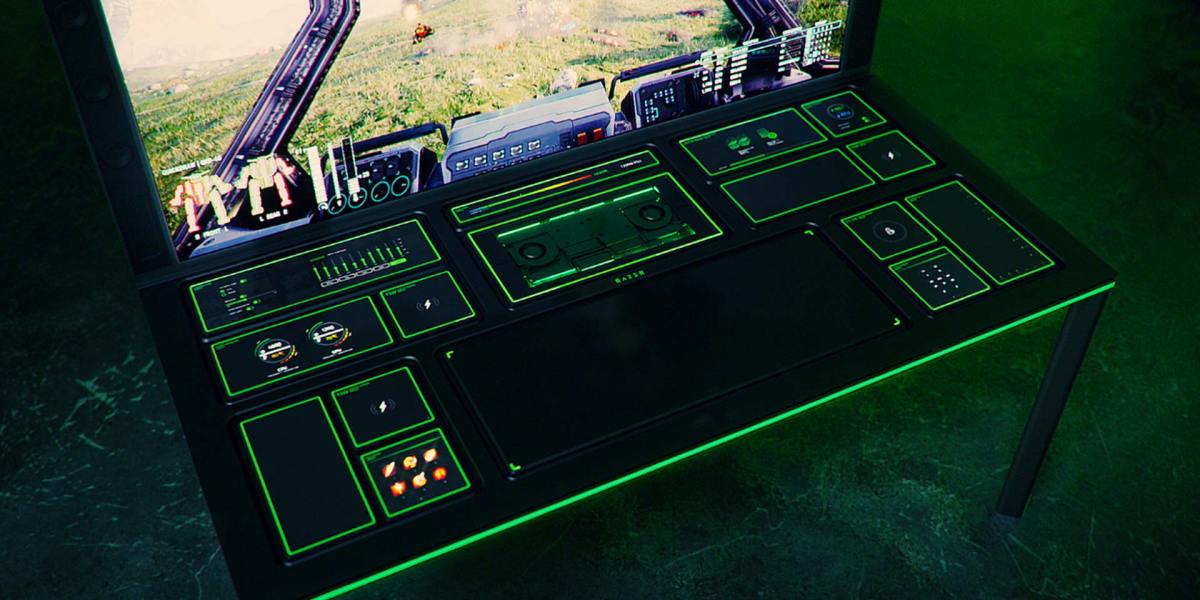 Every year, CES plays host to countless new products and exciting concepts that may or may not transition into production models. It’s a playground for techies, and many simply look forward to seeing what companies cook up. Razer is one such player that always enjoys showing off a cool new concept (or a few), as many surely recall the outlandish Project Hazel RGB masks that appeared last year. This year is a little more tame with Project Sophia, Razer’s futuristic gaming desk concept that can seemingly do it all.

Project Sophia, as Razer describes it, is designed as an all-in-0ne solution that offers unmatched levels of utility and customization. Whether you’re a gamer, professional, or content creator, Project Sophia can be functional for you. This is attributed to the 13 configurable interface modules that allow users to place touch displays in whatever arrangements suit their needs. The modules slot in under the glass surface to provide a HUD type of experience where different functions can be commanded via touchscreen controls. Did we mention there’s a full PC inside of it? And an attached 65-inch OLED screen?

Project Sophia comes equipped with a custom PCB in the center that can house modern desktop components including CPUs and GPUs. Users can apparently swap out components as needed for upgrades and the like, though information is limited on how it all works together. Additionally, there’s an EGPU compartment that interfaces via a Thunderbolt 4 cable. As for the display, Project Sophia has two options for 65 or 77 inches.

Straight out of the future? Perhaps

Of course, this wouldn’t be a Razer concept without RGB lighting. Project Sophia has plenty of that too, and it frankly looks great. Note the RGB strips along the sides of the desk and more down at the base of the legs. Razer doesn’t explicitly state how peripheral mounts work, but we can also see a webcam and microphone arm featured in the feature video. And don’t worry, it also comes with a cupholder.

It may just be a fancy and (certainly) expensive desk, but it has a lot of potential for being functional. The fact that it’s a sleek showpiece adds to the appeal as well. While this is just a showpiece, it’s possible Razer could choose to release some type of premium gaming desk in the future with at least some of the features implemented in Project Sophia. After all, the RGB mask became a real thing called the Zephyr, so why can’t this?

You can head over to Razer’s website to see the full press release and get a little more info on Project Sophia.