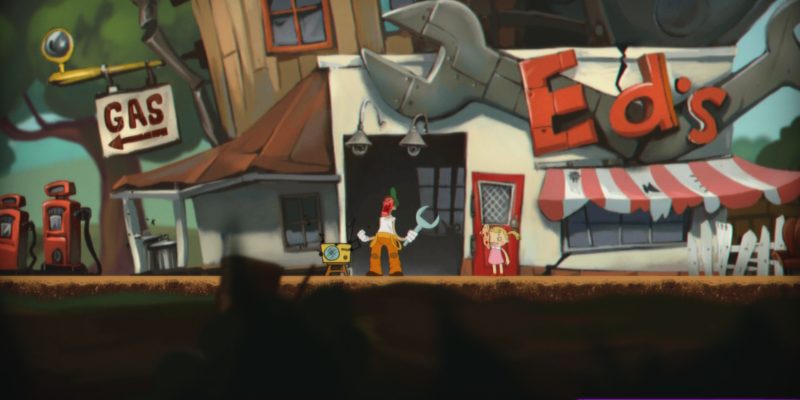 Putting fun, unique ideas into a game is pretty tough. Redneck Ed, a 2D arena game, definitely has its fair share of these. Unfortunately, it looks like a mid 00s flash game, controls poorly, and is as cheap as it is frustrating. There is enjoyment to be had and there’s some very clear creativity on display, but none of that is enough to make the game one worth playing.

Redneck Ed is the story of a redneck named Ed (are you not entertained?) who is going about his day until a little girl rips his face off and runs away. He chases her, only to get pulled up into a space ship where he’s now expected to fight for his life on an intergalactic game show. It’s a silly premise that works fairly well for the most part. It’s held back by less-than-stellar art, though. As Ed, you need to take part in a series of challenges in order to get your face back and get home.

Even though the art suffers due to how cheap and crude it looks, there’s an undeniable level of creativity on display. The arenas and their inhabitants are bright and colorful and filled with characters that have a fair amount of personality. You’ll even see cameras flying around that Ed can smack with his wrench. A worker gives him crap for doing this, even. He’s got a show to run and whatnot. 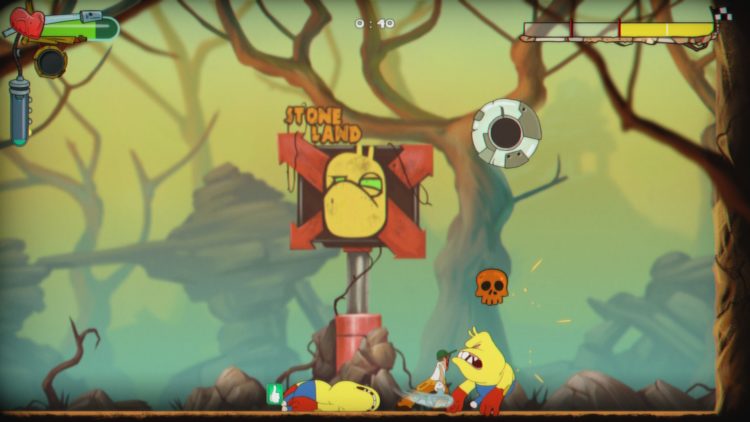 The structure of Redneck Ed is very simple. The ship (or wherever you are) has six floors. The bottom floor has upgrades and consumables to buy. The next four have a few challenges to choose from. The top floor leads to the game’s final boss fight. Each of the game’s challenges (of which there are about 15) have three difficulty levels to choose from with bonuses for achieving certain milestones. Every challenge you complete earns Ed stars and likes. Getting more stars unlocks more challenges and moves, while likes allow you to purchase upgrades and consumables.

The challenges are organized into easy, medium, or hard, and each difficulty has three medals that give you more stars and likes. You earn these for getting through the challenge without having certain cards equipped or for not taking any damage, among various other requirements. Ed also receives likes in the middle of battles for performing well. Once you have enough, you can buy some of those aforementioned upgrades and consumables.

Upgrades in Redneck Ed are purchased from the eye-rollingly generic Frankenstein creature knockoff named Dr. Frankie. You can upgrade Ed’s health, increase how many items he can carry, increase the size of his item stacks, and increase the number of effect card slots he has. Items come in offensive, healing, and buff varieties. They’re inexpensive and you might find them worth having around. I liked to have healing items, but I didn’t find the buffs helpful at all, as Ed is so weak and they’re so ineffective that I didn’t see a reason. Effect cards typically need to be won from the various challenges and do a variety of things. They can increase the number of likes Ed gets or give Ed a shield that can take a couple of hits. These cards can also be upgraded once. 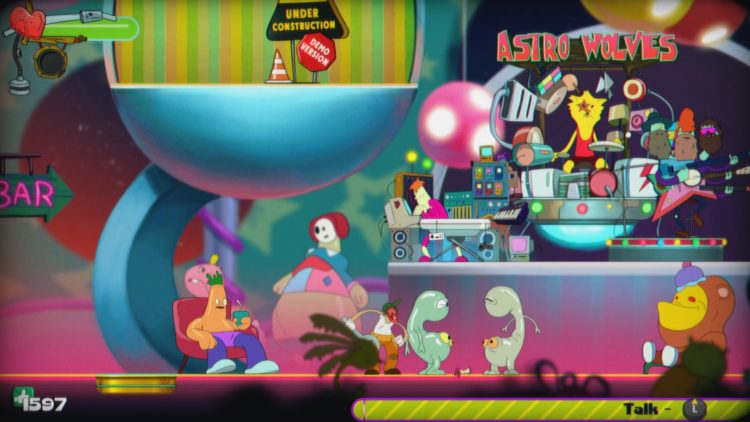 In space, no one can hear you scream

Many of the arenas in Redneck Ed are boss battles where you go toe-to-toe with a hideous foe and have to deplete its life bar to win. Others just have you take out waves of enemies. There are a few exceptions, though. One makes you actually play through a level while running from a giant tooth machine of some sort. Another has you track down an enemy through a maze. Some of these battles are interesting, but they’re often more frustrating than anything. The game has no issue with putting insta-kill traps on the floor and the damage balance is simply terrible.

Most of the difficulty in Redneck Ed comes from factors like poor design, stiff and unresponsive controls, instakill traps, and the previously-mentioned damage imbalance. Ed attacks with a wrench and can learn several new moves, including equipable supers. The non-supers tend to do a laughable amount of damage. Enemies on the other hand, often do massive amounts of damage. It’s not uncommon to spend several minutes slowly chipping away at a boss, only for it to deplete half of your health bar with a single hit.

Ed can dodge and air dodge, but he can’t interrupt a combo. This wouldn’t be a problem if the controls were tighter. Movement is imprecise and cumbersome, and trying to get out of the way of enemy attacks while actually fighting is more annoying than it should be. Certain bosses seem to operate on the premise that you are able to gracefully control Ed in the air. Only, Ed isn’t up to the task at all. Furthermore, the amount of damage Ed does is so low that even stun locking a boss and wailing on them non-stop can take minutes. Many boss battles also go on way too long due to this. To add insult to injury, enemy attack damage can also vary wildly. For instance, the last boss has a laser attack that takes a sizeable amount off of a maxed-out life bar. Sometimes however, it will just one-shot you for no reason. 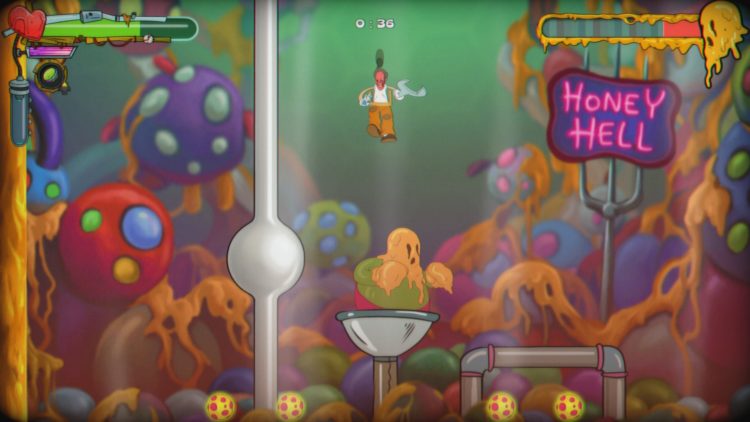 You can beat Redneck Ed in a few short hours, although you can certainly put in more by trying to do all of the challenges to get their medals. There are some bugs though. There’s an issue where PS4 controllers sometimes think you’re inputting two button presses at once, which can make it impossible to achieve anything. At one point, I died to a boss on account of falling on insta-kill spikes and the game thought that I won instead. The word “excellent” became stuck on the screen afterwards, and I had to exit to the main menu. Retrying a challenge sometimes yields remnants in the arena from when you last died. They only linger for a second, but it’s still weird. Oh, and finishing a level showed Ed exit via a cartoony portal, only for him to step off the main elevator and then exit to nowhere through the same portal before reappearing back where he stood a moment before.

Redneck Ed can be entertaining at times but it still needs a lot of work. The game balance needs some serious fine-tuning, the controls need to be tightened up, and some of the animations could use additional frames. Some of the stages are certainly amusing, but between the subpar combat, poor visuals, and control issues, many will find the game to be more trouble than it’s worth. 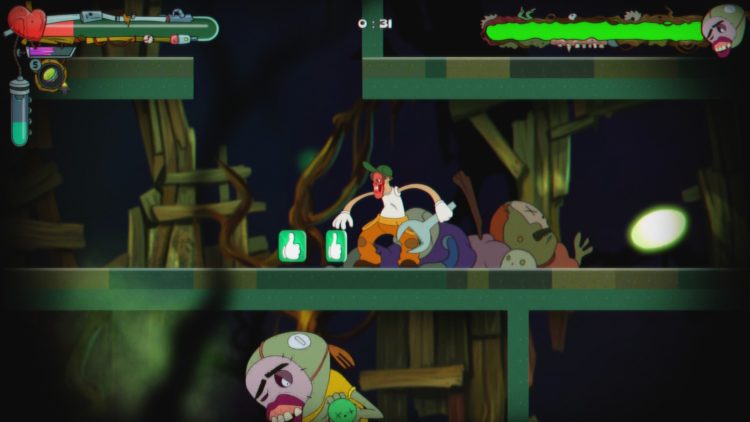 Redneck Ed can be fun at times but the poor gameplay balance, underwhelming controls, and crude visuals make it a hard game to recommend.