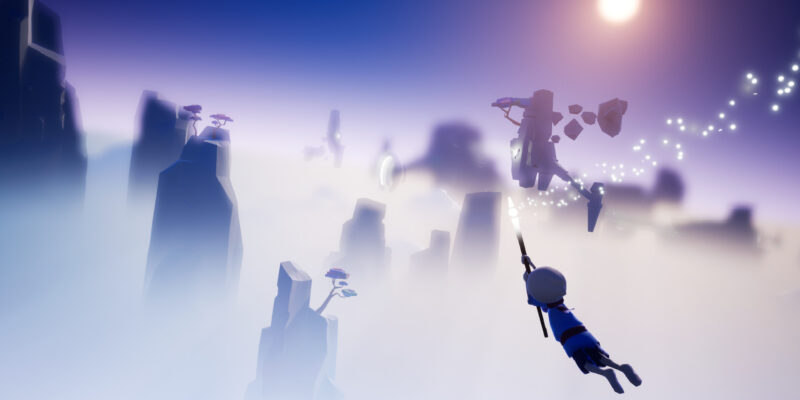 Game developer Jonas Marke has been plugging away by his lonesome for a few years now. After successfully Kickstarting his game back in 2018, he set out to make a compelling puzzle adventure inspired by games like Journey and Abzu. The fruits of his effort have finally paid off, and Omno has officially released on Steam, consoles, and on Game Pass. The game retails for the slightly odd price of $18.99 USD, plus you can purchase the soundtrack if you so wish. It might pair nicely with your a real-life adventures as you run into the woods and never return after quitting coffee.

Omno tasks players with going on a journey in an “ancient world of wonders,” which at no point involves leading a kleptomaniac monkey through a cave filled with treasure. The game is a single-player affair and is packed with secrets, puzzles, and lovely vistas. Locations such as deserts, tundras, and forests await you if you choose to partake. There are also NPCs to meet, from tiny critters to towering giants. Manke, the game’s developer, has been working on the title for the last five years. He apparently used know-how accrued from working as an animator on movies, as well as games. That explains the below trailer.

Omno is out now on Steam and Game Pass

The Kickstarter officially sought €32,000 EUR. However, it ended up over triple that, raising €97,769 EUR from over 3,000 backers during its campaign. Omno was originally supposed to release in the fall of 2019, but time makes fools of us all and the title was delayed by nearly two years as Marke worked to leave his name on the games industry. The game truly looks like a labor of love, and I’m personally looking forward to getting lost in it over the weekend. It currently holds a Positive rating on Steam, with 100% of its 33 reviews being positive.