Resident Evil Revelations 2 has had my attention for awhile. This is less down to the game itself (although the prospect of a playable Barry Burton is certainly a welcome one) and more down to the episodic nature of the game. Episodic games are nothing new, but episodic games with the episodes released weekly rather than every few months… well, that’s something I’m very, very curious about.

I haven’t had the chance to actually finish it, mind you. From what I can gather, this first episode isn’t the longest thing in the world, but right now I’m more curious about how it runs on PC rather than how enjoyable it is. So, let’s start up episode one of Resident Evil Revelations 2, and take a look at the options. 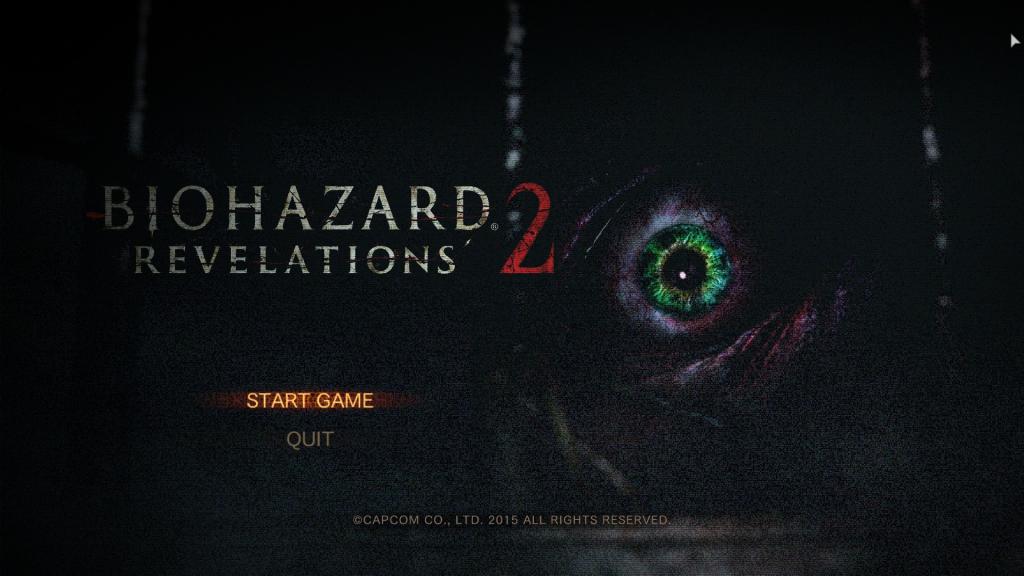 Okay, apparently I meant “let’s start up episode one of Biohazard Revelations 2.” I guess the options menu appears after starting a profile? 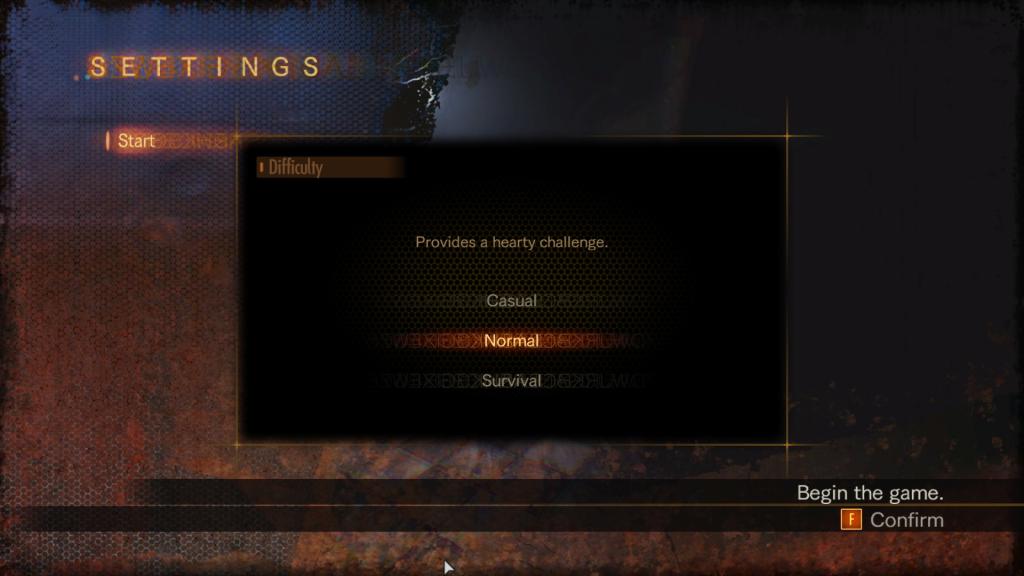 Orrrr after choosing the difficulty. I’d like to add that the game also offers a selection of 11 display languages and five voice languages, which is rather impressive. 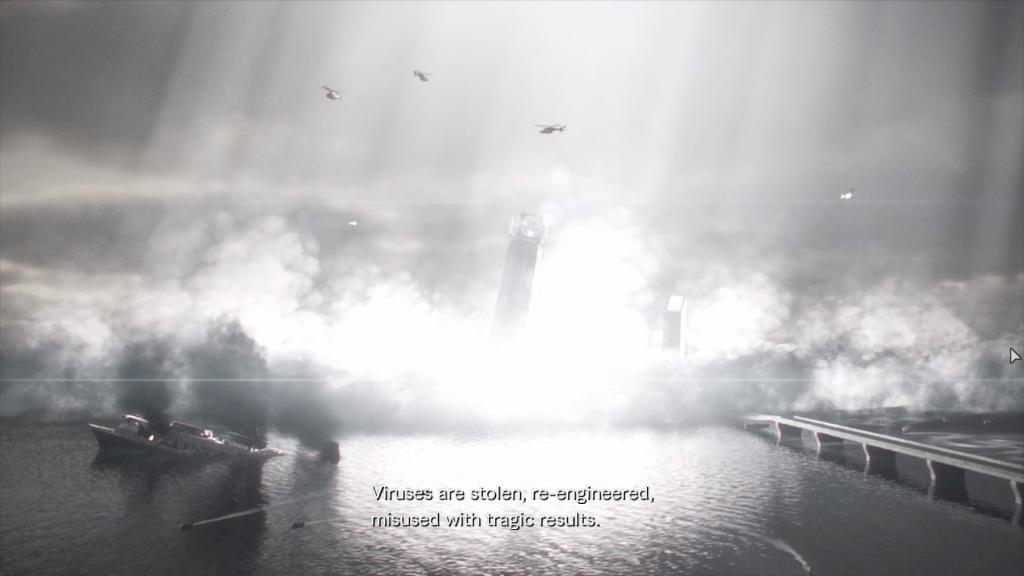 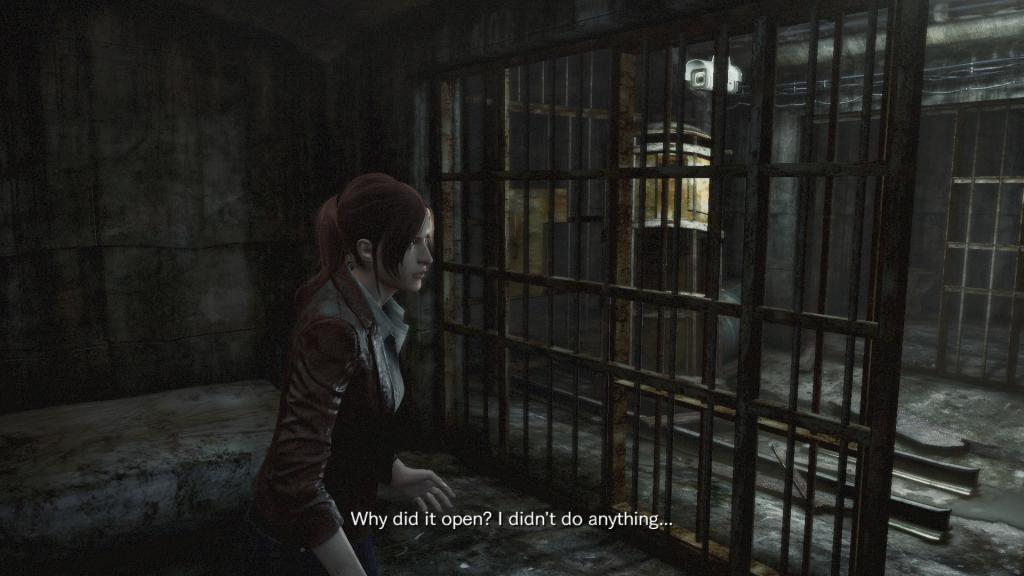 Okay, now that the game has started, I can pause and find options! 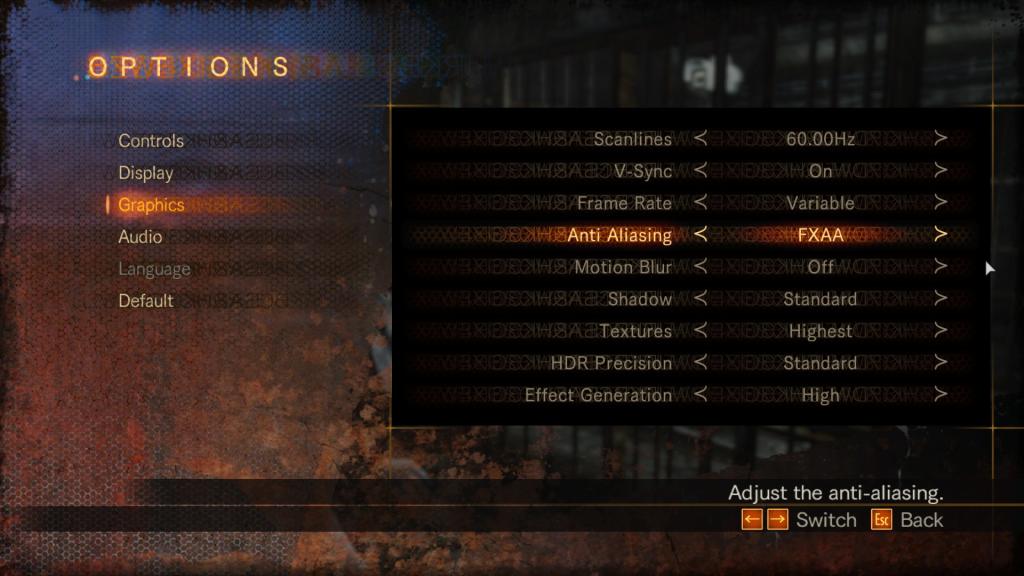 Not the largest number of options I’ve ever seen, and a few of them are spookily imprecise (“Effect Generation” apparently changes “the amount of effects to be generated”) but there’s enough fiddle-ables that I’m relatively satisfied. It defaulted to the lowest options, but as I’m running an i7-3820 with 16GB RAM and a GTX 670, I figure I can run it a little higher.

I initially shunted things to a more middling setting, which is what you see above, and by and large everything ran okay. I later tested things in Raid Mode with absolutely everything ramped up to full, and… it also ran fine. So apparently my computer can handle Resident Evil Revelations 2 on full detail, which is quite nice. It doesn’t look amazing, but it’s visually inoffensive. I should add that there are a few quirks with the visuals that might put off anyone expecting some sort of phenomenal beauty; animations are canned rather than directional, for instance, so shooting a zombie will cause it to recoil backwards, even if you shot it in the back. Again, not something that bothers me in the slightest, but I’m sure it’ll bug a few people. 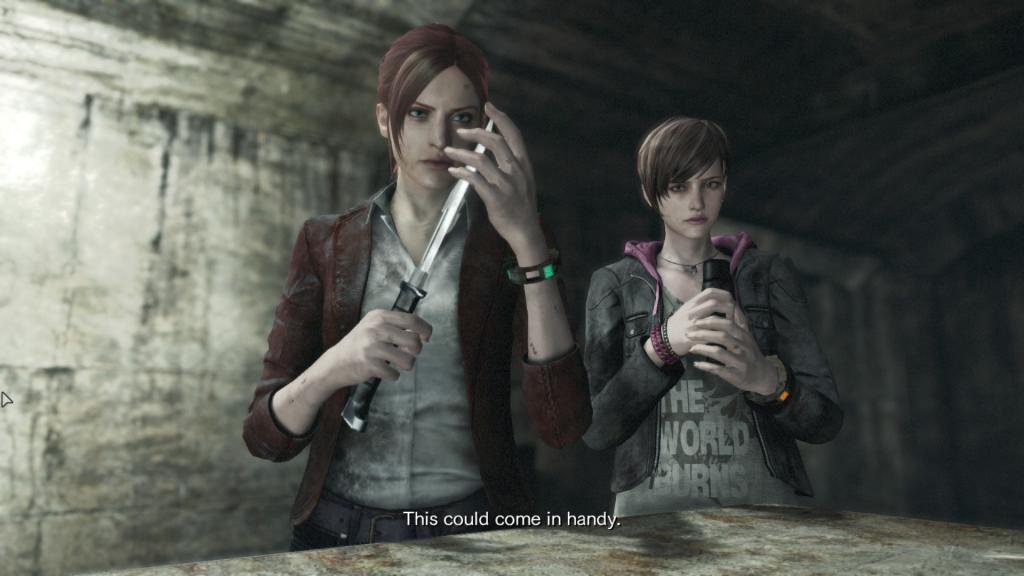 Claire has knives and guns. Moira has a flashlight and a blunt weapon. One of them is more useful in combat than the other.

But I said that my computer can “apparently” run it on full detail. “Apparently” is the key word there, though, because it runs really weirdly. I’m going to say right now that I had FRAPS going with its little framerate counter, and everything was apparently flying along at 60FPS, with a couple of moments dropping the framerate by a grand total of 1 or 2. So yeah, everything should’ve been running at 60 pretty much continuously.

But it didn’t feel that way. There’s a weird input lag that fades in and out; it’s not as bad as in Resident Evil Revelations (which I found pretty much unplayable) but it’s noticeable. It was most noticeable when in control of Moira and shining the flashlight around; it felt like there were constant massive frame drops, but everything was apparently still running smoothly. It’s incredibly difficult to explain properly; it’s as though, when swinging the light to the left or the right, it was suddenly losing a bunch of frames in transition and the flashlight beam would suddenly be far to the side of where it was – and often further (or not as far) than I’d expect it to go with that amount of mouse movement. Almost as if the game was dropping a lot of frames in the process, or if there was a huge amount of input lag/mouse acceleration going on… but neither of those appears to be true. It’s unusual. 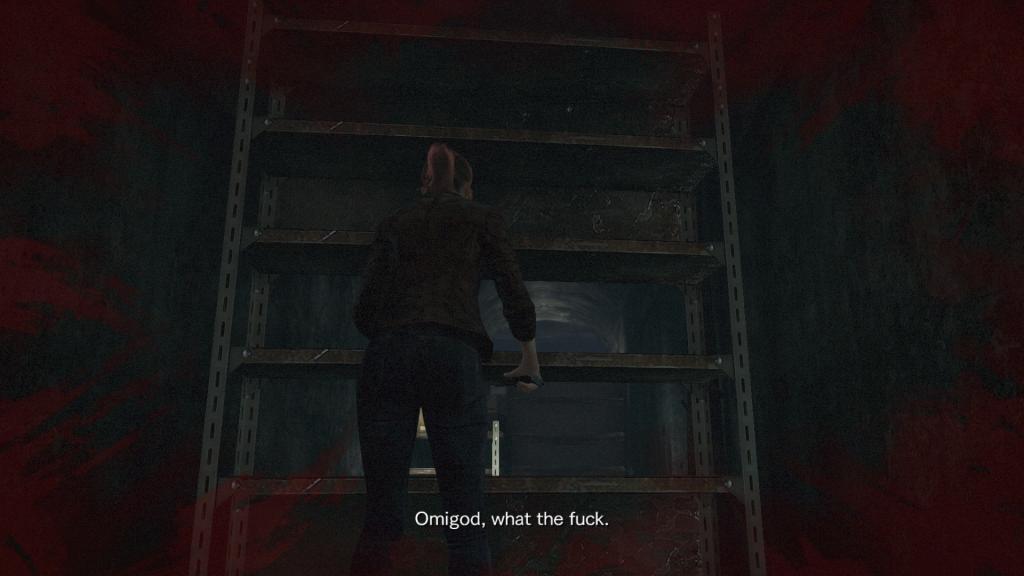 Moira’s defining character traits in this first episode are 1) swears a lot, 2) hates Barry, and 3) won’t use guns.

It’s still entirely playable, mind. Messing around with the mouse sensitivity alleviated this somewhat, and most of the aiming requires enough precision that you’re rarely swinging the mouse around wildly. It’s problematic, but as it seemed mostly limited to Moira’s flashlight – which I’ve only really had to use in slow, quiet, safe areas, so far – it’s far from a game-breaker. Not yet, at least; it’s certainly worth bearing in mind.

That might just be me, though: a quick browse through the Steam forums indicates a lot of people are having serious framerate issues. I sort of hoped I would meet these issues so that I could shed a bit of light on them from my perspective, but… nope, everything’s fine. It’s worth noting that a sizeable contingent of players are experiencing issues, though, so consider yourselves warned.

Also: no offline co-op, and online co-op for Raid mode will be added at a later date. I’m not going to harp on this too much, because you can read more about that over here. Again, though, it’s totally worth mentioning. 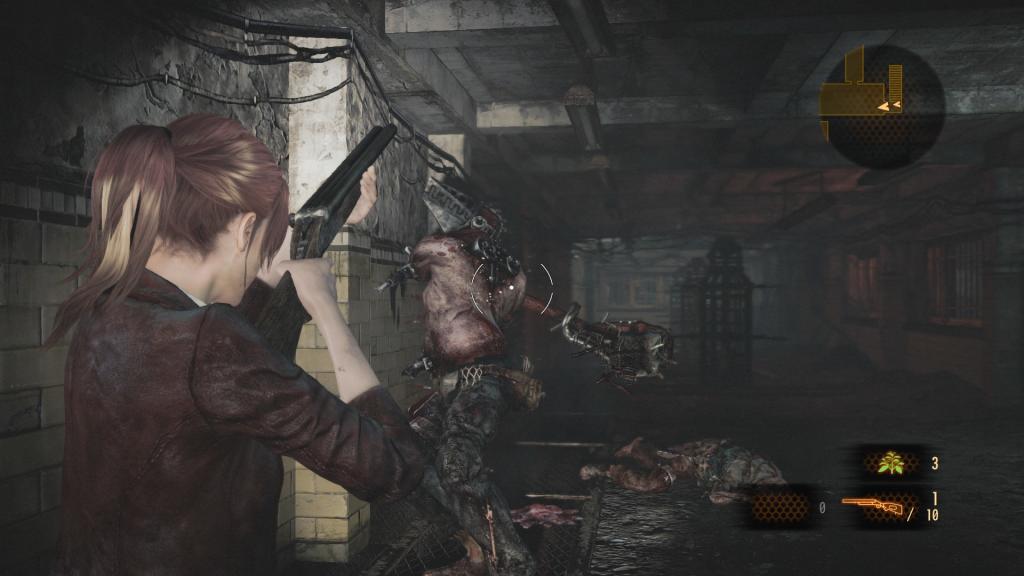 Speaking of guns, though, I always get worried when I’m given a shotgun early. Usually for good reason, judging by this hammer-happy chap.

The controls themselves are firmly in the “Eh, they’re alright” camp. It’s definitely a port rather than something that’s been built specifically for the PC, as pretty much everything has just been directly mapped rather than reworked, but those control mappings are pretty sensible. As an example: you can use the mouse to set skills, but rather than clicking on the skill first, or dragging the skill to that slot, you have to do it as you would on a console: click the slot, then click the skill… which means it’s almost more intuitive to just do it on a keyboard, and that makes me sad. Menus have multiple tabs which you cycle through with keyboard buttons that would almost certainly be the bumpers on a gamepad. Etc. It all works, but it’s noticeably not a PC-specific control scheme.

Most of the default keybinds make sense (like Tab to switch characters) but a few are eyebrow-raising. Left Shift for throwables and Left Alt for run? Crazy. And no, waggling the mouse left and right has never and will never be an acceptable alternative to shaking the analogue stick on a controller.

I’m relatively impressed with the 40 minutes I’ve spent with the game itself, though. Claire and Moira are trapped in some sort of disused prison complex that has so much brown and rust it looks like it’s on loan from Silent Hill. Ammunition is scarce, and zombie skeletons with all sorts of metallic piercings are charging about trying to give you murder-hugs. Someone is apparently watching, opening doors and playing with the proceedings, adding a bit of a Saw feel to it. It’s not exactly scary, but pretty much anything that contains mild jump-scares and gives very limited amounts of ammunition is at least slightly tense.

Even when you learn to just shoot people twice in the head and then kick them. 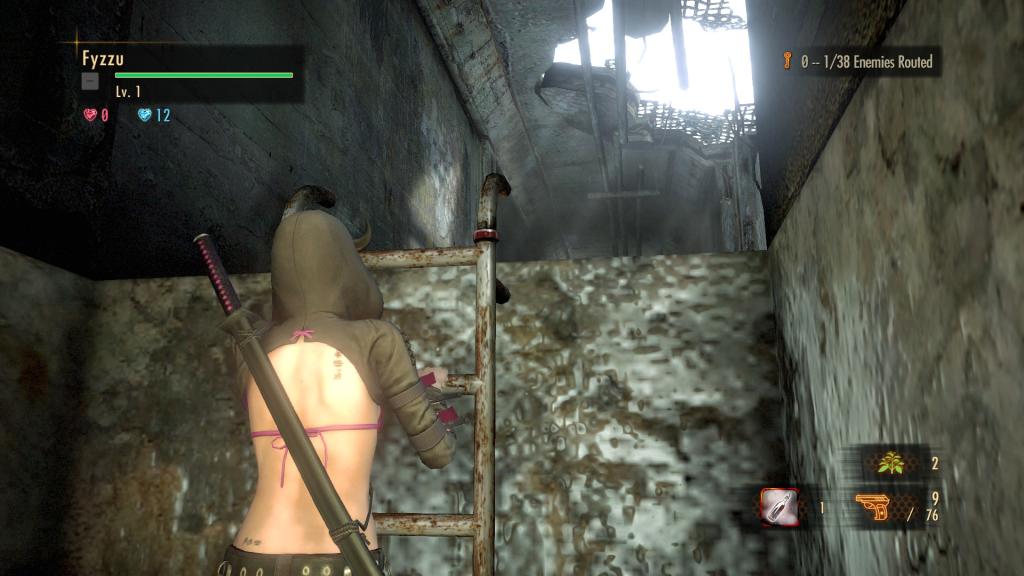 With everything whacked up to full, the character textures shine, although the environmental textures lack a little. Still, the general effect works; you’ve generally got better things to look at than walls.

Raid Mode is also back, offering a slightly different take on the standard Resi Mercenaries mode. Rather than fighting a time-limited battle to get a high score, you’re trying to get through a level while fighting against (and killing a lot of) randomly-generated enemies, which might have special modifiers that make them bigger, or faster, or made of fire. Completing levels earns your character experience and cash, which can be used to unlock and upgrade stats or get your hands on shinier weapons. The fact that it’s actually entertaining speaks a lot for the combat system in Resident Evil Revelations 2; it’s not the glorious, fast-paced silliness of Resident Evil 6, but instead has a rather more measured tone that still demands careful positioning and aiming to survive.

I quite like what I’ve played, but not without reservations. If the port was perfectly solid I’d be a lot more upbeat, but the weird issues I’ve had, combined with the numerous issues popping up on Steam, mean I’d suggest being rather cautious before buying in.

I definitely can’t recommend buying in at the maximum tier, but buying the first episode stand-alone will only set you back £4.99. If you’re interested, that would be the safest way to try it for yourself: you’ll get a taste of the campaign, Raid Mode, and can see whether or not the game will actually work for you, without spending either £19.99 or £29.99 on the Complete Season packs. Still, it might be worth waiting a week or so to see if any of these issues are ironed out first.