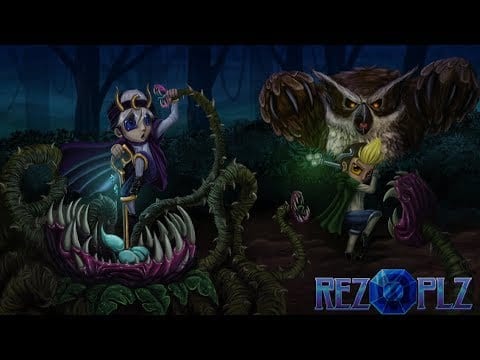 REZ PLZ is a pixel art puzzle platformer for solo or co-op play where players take control of two (apprentice) wizard brothers who will literally (and repeatedly) die for each other. Thankfully, they possess the power of resurrection. They have a bunch of other powers too, kind of. They’d be a lot better if they applied themselves a little more. But don’t take my word for it; there’s a new REZ PLZ gameplay trailer out that shows you some of the brothers’ abilities.

Till death do us part, briefly

Look, sometimes you’ve got to kill your brother to get where you need to be. Bodies make for extremely good platforms, you know. You can always bring him back. Brothers understand these things. As you progress through the five realms of the evil wizards of the Dark Arcanum, the brothers will be impaled, sliced in half, burnt, eaten, and face all manner of gruesome deaths. But don’t worry — it’s all good.

He totally meant to do that.

The other mechanic highlighted in the REZ PLZ gameplay trailer is the alley-oop. Not as impressive as bringing someone back from the dead, but it’s certainly a neat trick for getting to those hard-to-reach places.

If you haven’t seen the previous trailer for REZ PLZ, it gives some insight into the overarching story of the game and sets the tone nicely. The brothers are on a very serious and important quest, but they can resurrect each other. So, what’s the harm in goofing off a little along the way? The trailer also shows a load of different scenarios where letting your brother die can really benefit you. It’s worth looking back at.

REZ PLZ will be coming out on PC in the first quarter of 2020. It will be available on Steam and you can add it to your wishlist now.