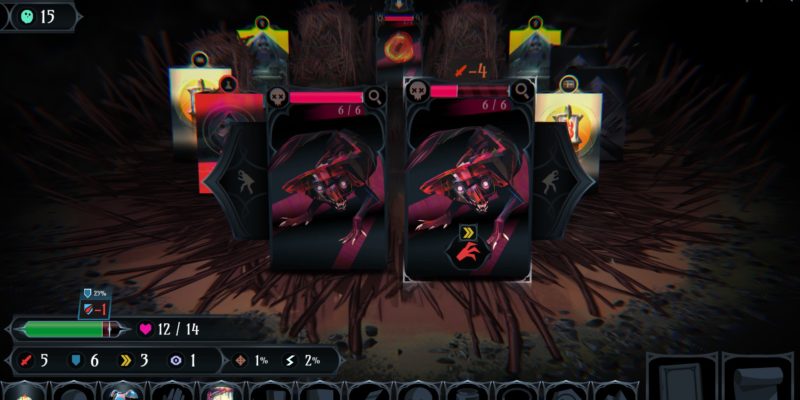 Ring of Pain lives up to its name. You can die repeatedly for a few hours to learn your way around the game’s mechanics. Or you can just read this and allow my suffering to be your gain. I’m going to break down exactly how the basics work, so pay attention and you just might survive slightly longer.

Heart of the cards

There are 16 main depths, or dungeons, in Ring of Pain. Each one has a number of cards in it that contain enemies, treasures, potions, equipment, usable items, and stat increase. At the start of each run, you’re in a depth with only a handful of cards. How well your entire run goes can have a lot to do with what you happen to randomly get early on. In that first depth, you’re introduced to two enemy types: rats and exploding enemies. You’ll only be able to do two damage by default, which means that it takes two hits to kill the 4 HP rat and three to kill the 6 HP one. This floor has guaranteed loot and potions, so you’ve got a bit of leeway. But it’s important to prioritize staying alive. Taking down a 6 HP rat without grabbing anything first will put a serious dent in your health.

This first depth also teaches one of Ring of Pain‘s most important lessons: never hit the exploding enemies unless you either absolutely need to, or if you’ve got the gear to mitigate or trivialize the effects of it happening. Many exploding enemies will follow you and then prepare to self-destruct once in range. But you can scoot one card away and be safe from the blast, as it only affects cards directly to the right and left. 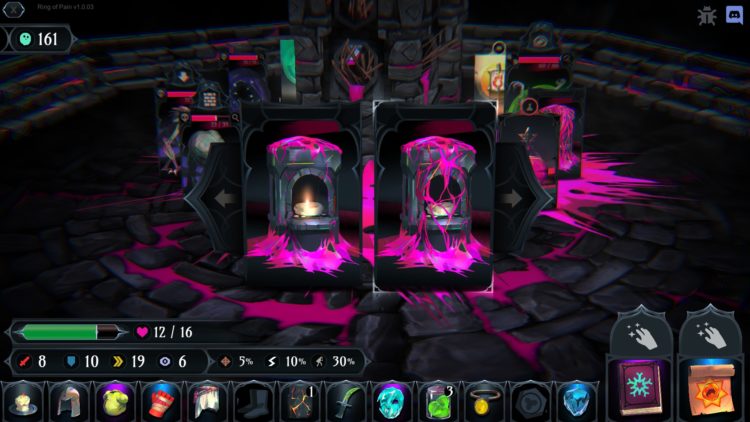 You move around the ring of cards by clicking arrows on the side of the screen. At the start, you have a 23% stealth chance, which isn’t high by a long shot. If you successfully sneak past an enemy, you’ll take no damage. But if you fail, you’ll take the full brunt of their attack as you move past them.

As you explore, you’re going to want to buff your attack, defense, and speed as much as you can. Both you and every enemy has these stats and damage inflicted and received are based around them. For instance, if you have four attack and hit an enemy with two defense, you’ll do two damage. But if you attack an enemy that has higher defense than your attack, you’ll only do one damage, which usually means you don’t even want to bother. Similarly, if you have four defense and enemy has six attack, you’ll take two damage, but enemies do both regular and piercing damage that cumulate. But you gain parry chance which can result in you blocking all damage when your defense stat is higher than the enemy’s damage output.

If you pick up good defense items in that first depth, you’ll be able to parry the 4 HP rats and take 0 damage even if you pass them over. If your speed is less than your enemy’s, they go first and vice versa. If you both have the same speed, you each have a 50% chance of attacking first. This is important because, if you have enough attack and are faster, you can one-shot enemies and lose nothing. 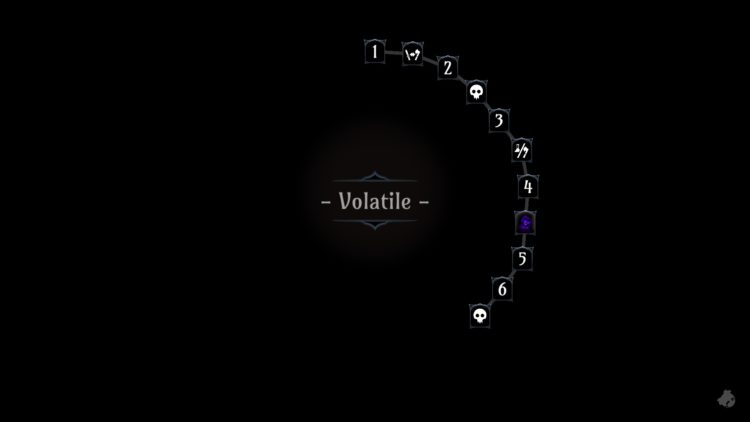 Every enemy you kill in Ring of Pain gives you souls, which act as your currency. You use souls to unlock chests or buy items from shops between depths. Items come in colored rarities: grey is the bottom tier, and then blue, purple, and gold. Unlocking each corresponding chest costs 20, 40, 75, and 140 souls respectively. Alternatively, shops (which pop up randomly once you exit a dungeon) carry two items and a free potion. When you open a chest, you get to choose from two random items and there’s no guarantee that you’ll want either of them. However, you are going to need equipment. The game is very much based on risk and reward.

Speaking of potions, they come in two varieties: regular potions that are either small or large, and curse potions. You’ll find curse potions and curse stat increases, with each having a chance to work out in your favor or do a certain amount of curse damage. It’s typically not a good idea to drink a curse potion unless you need it. If you’re down to just a few hit points and it’s the only thing in sight, it can keep you going if you’re lucky. If not, it’ll drop you to one hit point. The stat increases work the same, only they give you a random stat increase if you win and, once again, they do curse damage if you don’t. Ring of Pain doesn’t mess around.

You’ll also have the clarity stat to keep in mind, but I don’t focus on that one as much as the others. It governs how much curse resistance you have, bonus soul gain, potion heal bonuses, and critical hit chance. You’ll also get health increases which you’re going to want, obviously. Equipment often affects multiple stat point and not always in a good way. Many items will increase some stats and decrease others, so you’ll want to think carefully about what you equip because, once it’s on, you can’t take it off unless you find another piece for the same slot. 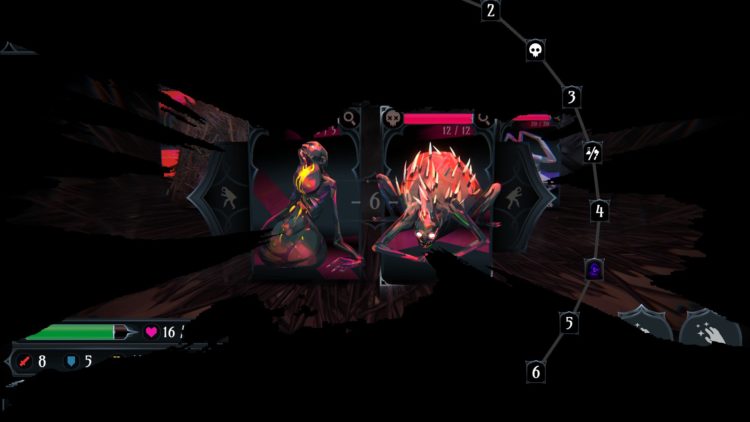 You always exit dungeons via doors. Plain black ones are regular exits that’ll always take you to the next depth, a shop, or a ‘finder’s keepers’ area where one of the game’s characters will offer you an item. If you see a card with a color in the back, that means it’s a challenge card or special area. Not all of these are dangerous, but most of them are. Then there are the two cards that take you to the two NPC characters. Owl’s is called reprieve and always has potions, while the ‘shadow’ never has anything other than dialogue options. The shadow’s door is marked by a purple vortex, and there’s never a good reason to go see him.

At any rate, those are the basics for Ring of Pain. Your goal is to get to the 16th depth where you’ll destroy a few pillars covered in pink gunk and then pick from the two ending paths. I hope this beginner’s guide has given you a good idea of what to expect from the game. We’ll have some more specific guides as well, so keep an eye out. 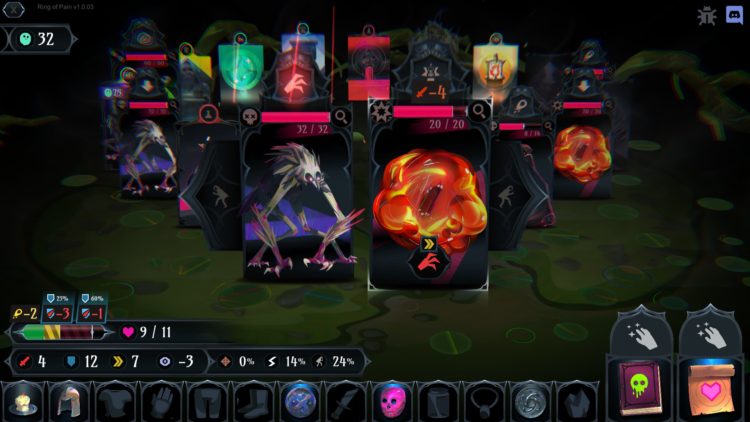 Raji: An Ancient Epic arrives on Steam today, and it’s a tale about Indian mythology

By Logan Broadley10 hours ago
Guides