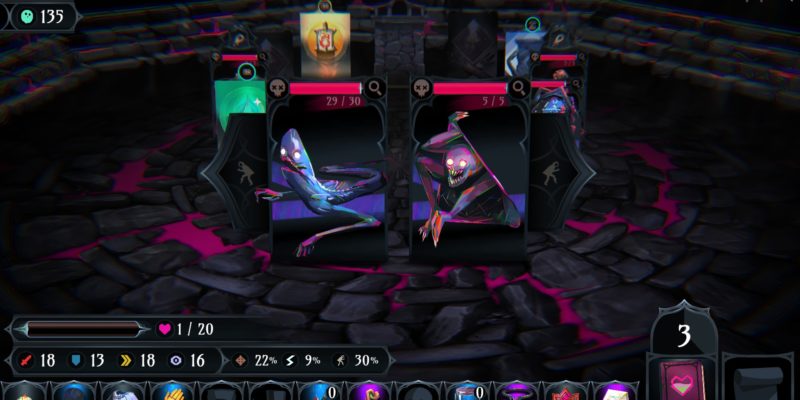 Card Crawler Ring of Pain has a lot of enemies that will absolutely murderize you. One wrong move and you’re the ghost with the most. To help you move past them, I’ve put together this handy guide so you’ll have an idea of why to desperately to stay the hell away from every enemy you see in Ring of Pain.

For starters, there are the rats you’ll find early on. There’s not much to say about them, so I’m not going to cover every enemy. You walk up to them, you hit them and they hit you. Pretty simple! Then there are the exploding red and green blob enemies. Some of these will follow you, but the icon on top of the card will tell you when they’re about to explode. Simply move until there’s a card between you, and the explosion won’t hit you. Don’t ever attack them unless you can mitigate the explosions. 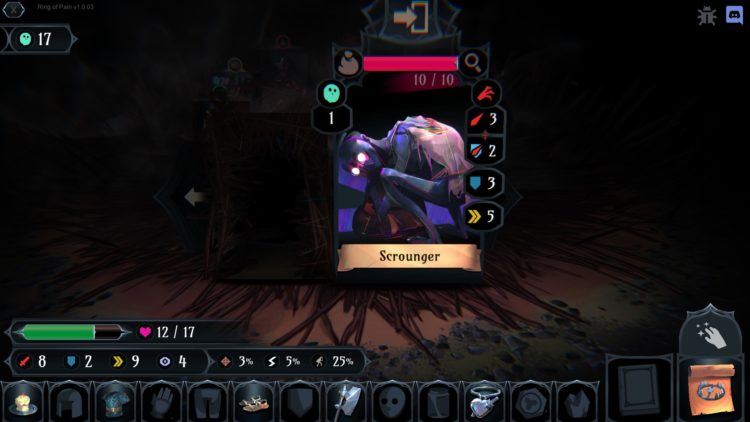 Scroungers carry potions and stat increases, so you’ll want to kill them. But they’ll vanish if you take too long. As long as your stats are okay, you shouldn’t have any trouble dispatching them. 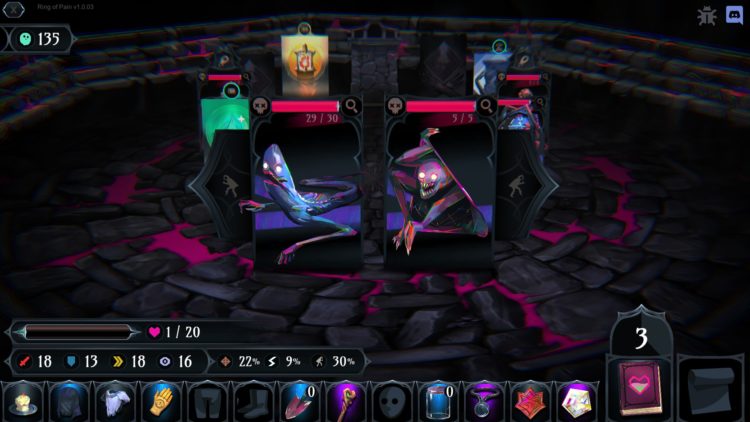 First off, I’d like to talk about the fella on the left: the Lurker. If you see one of these guys, don’t try and fight them. Don’t even try and pass them unless you can freeze them or have a guaranteed sneak. They do so much damage that they’ll instantly kill you in most cases. They basically act like blockers. However, if you get caught and have no other choice, you can always hope your stealth chance will kick in if you have to pass one. It happens! 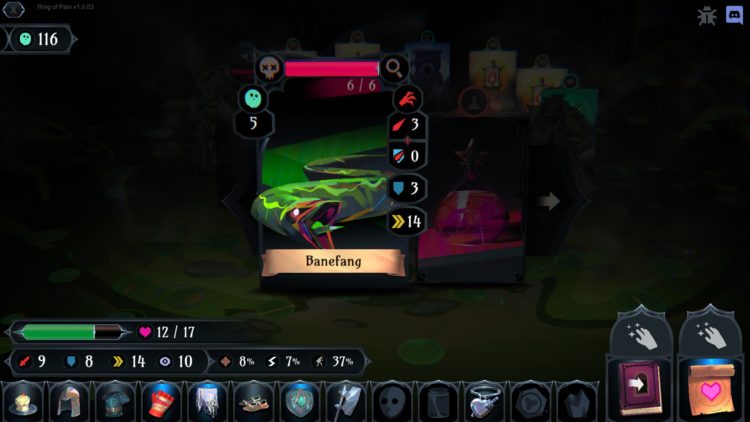 Ah, the Banefang. Another enemy you’re going to want to avoid. This snake hits you with three poison damage if you attack or get spotted while passing it. They can be safe to fight in certain circumstances though. 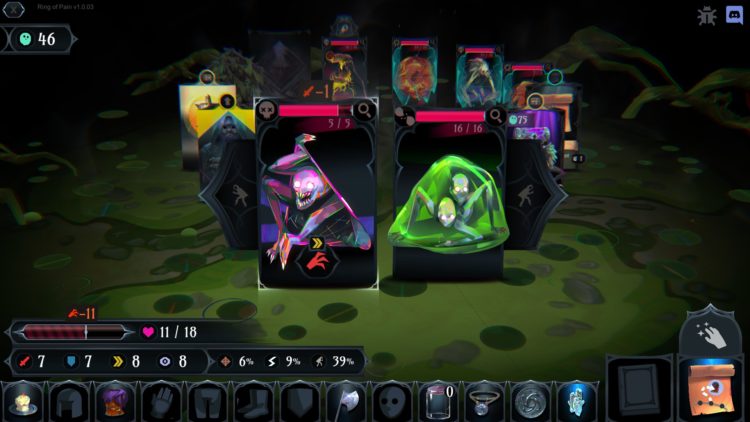 See the guy on the right? He’s not a big deal. But, if you kill him, he turns into two smaller enemies that surround you. None of them are particularly dangerous, but dealing with all three of them can chip away at your health with poison. 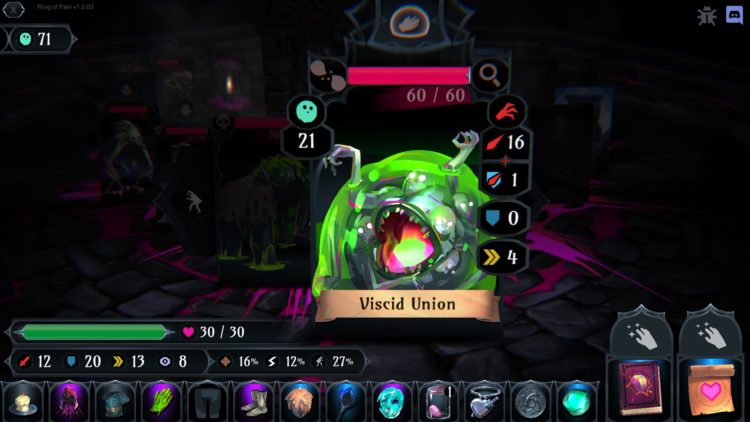 As you can see, the Viscid Union has a very large amount of health. Its attack is also quite high. And it’s poisonous. You’ll definitely want to skip out on this one too when you can. You’re going to get sick of reading that, but, yeah, these enemies are extremely dangerous once you get past the half-point. 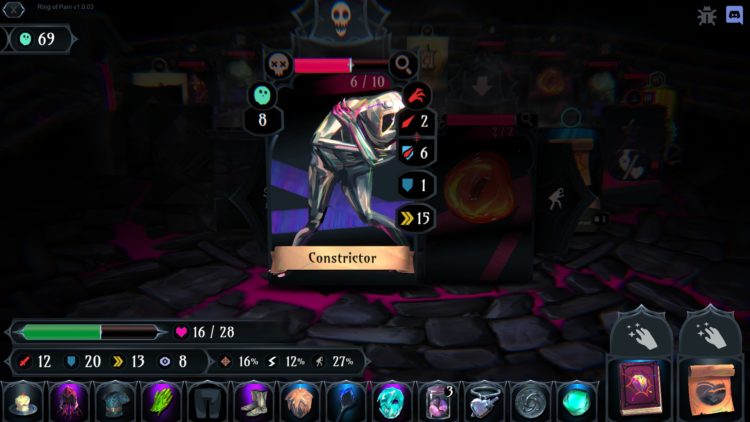 The Constrictor is a really unique enemy. See that skull above it? That means it intimidates you as soon as you hit it. Meaning that you typically can’t hit it at all unless your speed is high enough. So, uh, don’t hit them, as your attacks won’t do anything most of the time. 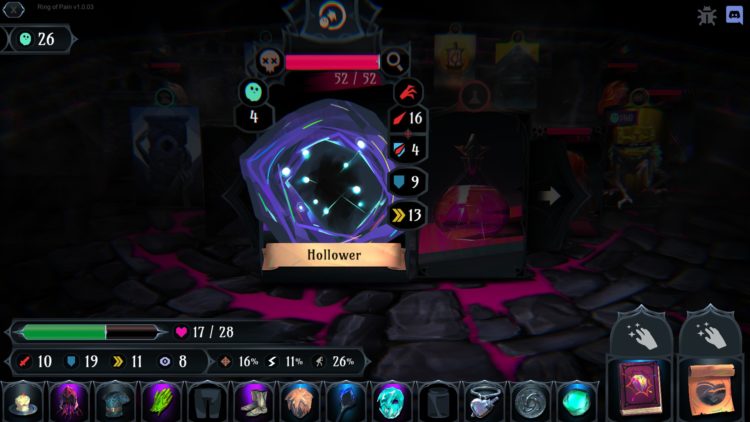 Another really unique foe. The Hollower has two characteristics that immediately differentiate it from everything else. For one, every time you get next to one, it’ll absorb some of your souls. The only way to get the souls back is to kill it but, yeah, it does a lot of damage and has even more health. So, just like most everything else, you’re going to want to stay away for the most part. They also have the ability to one-shot you if they highlight the two spaces to the right and the left of them. If that happens, MOVE. 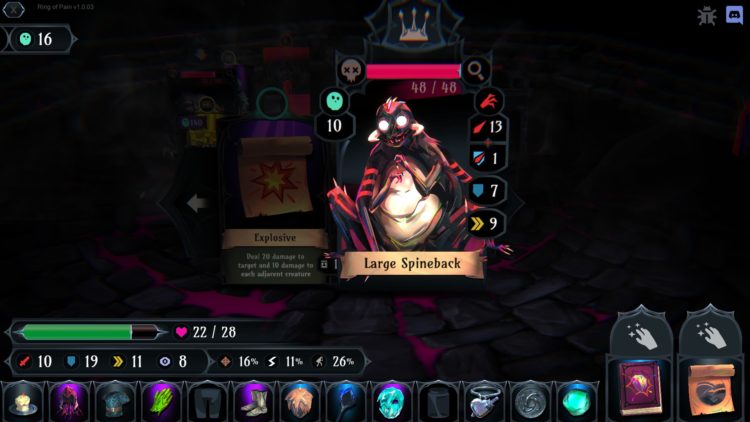 These guys don’t always have that much health, but when they have as much as they do here, they’re better left alone. Whenever you see those spiky icons on top of the card, try not to hit them, as you’ll take extra damage for touching them. When you want to attack one, move to the left and the right until they get a heart icon at the top of their card. The heart icon means they’re vulnerable and won’t do extra damage. There’s a very similar enemy with a great deal more spines that you’ll find later on, too. The same rules apply. They’re just. . . uglier? 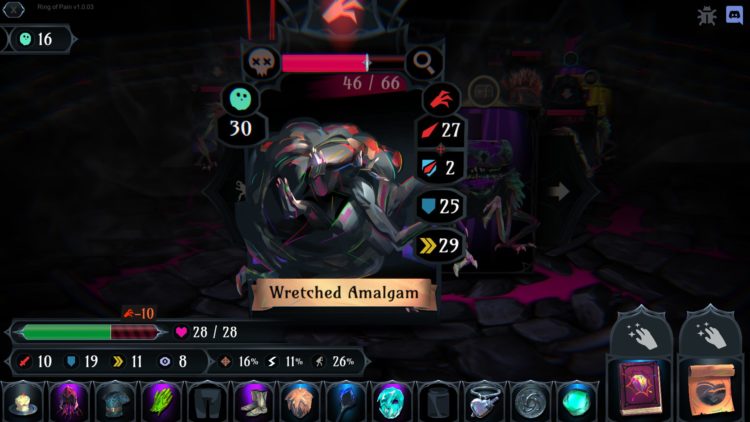 Uh-oh. These gents follow you. But, they also absorb everything in their path. You can use them to clear an entire floor if need be, but the enemies they absorb don’t drop souls. Earlier versions of them don’t have much health and defense either, so you can safely one-shot them a lot of the time. 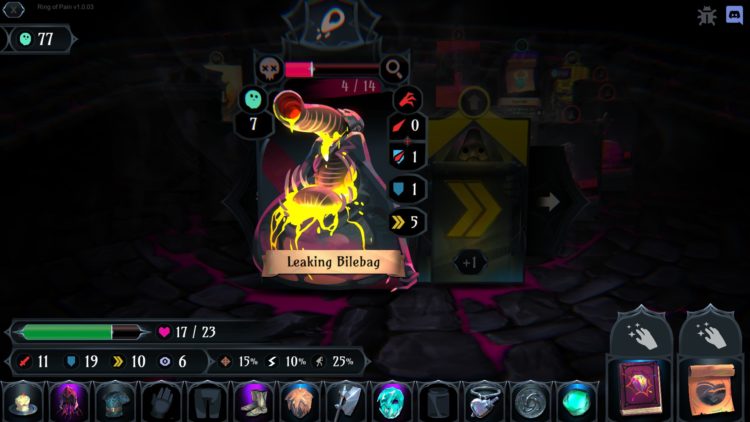 Bilebags are more of an annoyance than anything. They’ll shoot at you if you’re within their range, so you’ll typically want to kill them as quickly as you can. You can safely wail on them when you’re right next to them, though. They can’t shoot you from that range, so they become nothing once you close the gap. 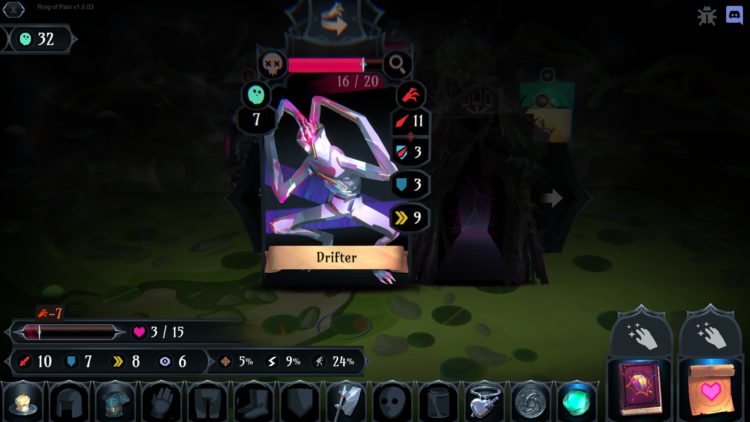 I hate Drifters. They move every turn in the direction their icon is pointing. They only stop for blockers. Just keep moving and they won’t catch you. Just know that you will get sandwiched in between them and other enemies at times. It’s gonna hurt. 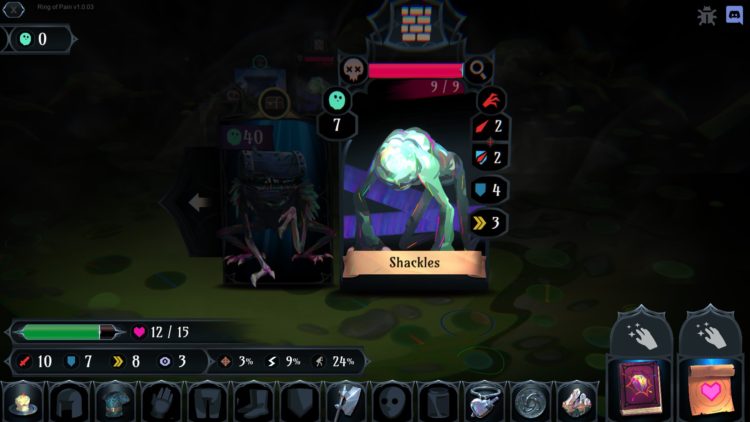 Shackles are literal blockers. As in, you cannot pass them unless you have a very specific item. If you run into one and there’s another enemy coming, you’re going to want to focus on killing them ASAP. They don’t have much health at first, but later ones can become a problem. 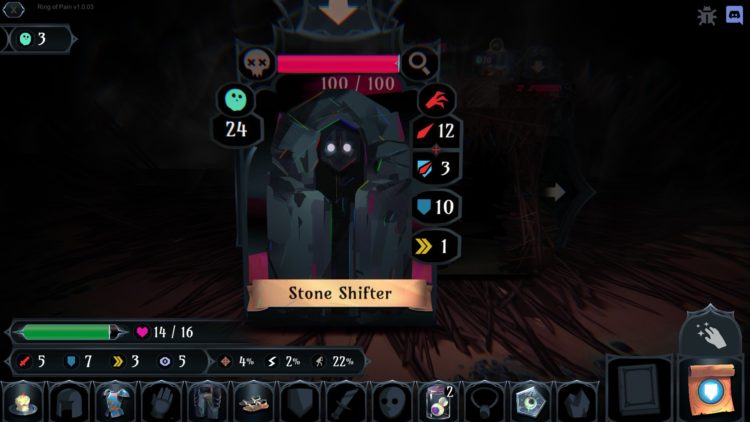 You’ll only find these beauties on floors marked “Patience.” They don’t do anything as long as there’s a number above their head. This corresponds to how many moves you have until they start following you. They come in pairs and, if you don’t leave soon enough, they’ll crush you to death. They also function as walls and you cannot pass them. 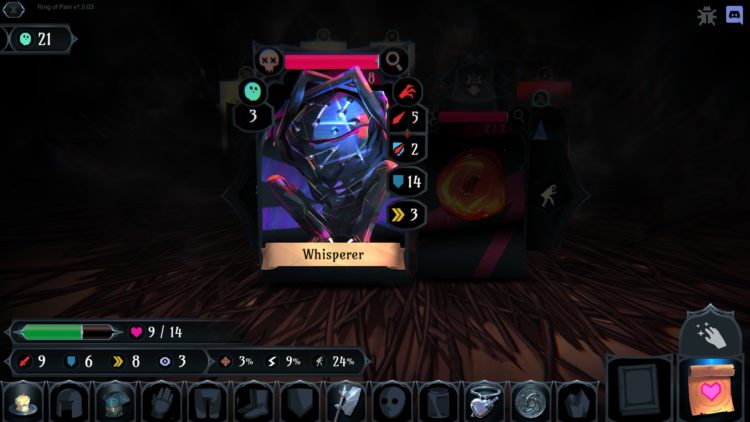 Whisperers show up fairly early on when your damage won’t be all that high. As such, you’ll mostly be trying to avoid them. They’re not a big deal or anything compared to a lot of the others, as they don’t do much damage. They typically aren’t worth fighting though. 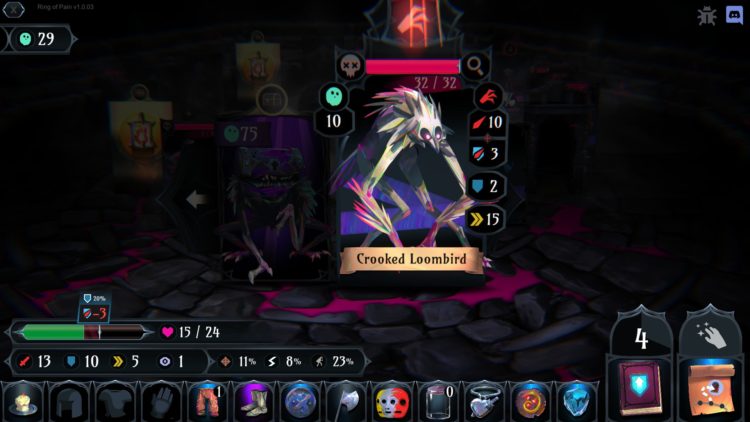 Oh, how I hate thee. Let me count the ways. ONE ONE-THOUSAND! TWO ONE-THOUSAND! Loombirds follow you and hit you twice. Even if you successfully sneak past one, they get to hit you once. They also have a lot of health and can make a situation turn bad very quickly. 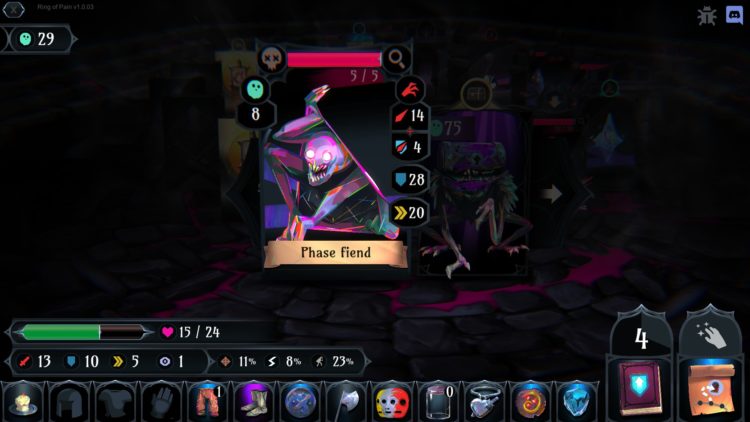 Oh, they only have five health? That’s not a big deal! Oh, but they’re insanely fast, have a ton of defense, and do a whole lot of damage. Like the Lurker, this guy acts like a wall without being a wall. Avoid. 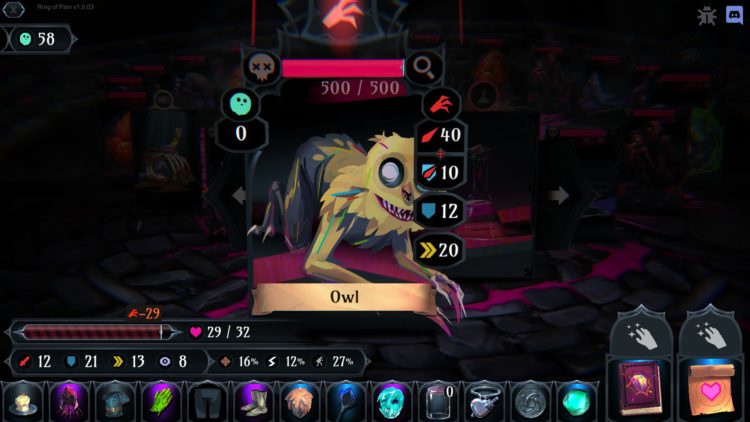 Everybody say hi to Owl! Owl is a bastard and I hate him more than I’ve probably hated any enemy in any game ever. He follows you incessantly and does a massive amount of damage! Oh, and he’s only rarely vulnerable to attack! He also summons enemies indefinitely. 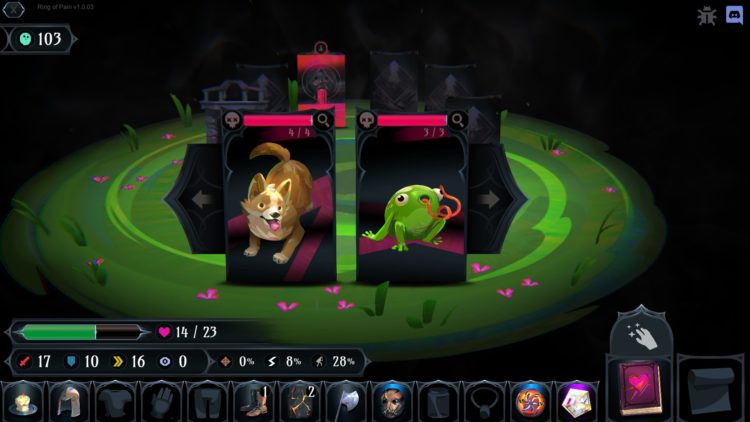 You’ll find dogs and frogs on Companions floors. They are not enemies. They don’t do anything. You can kill them and harvest their souls if you’re some kind of bastard. There’s even an occasional NPC that’ll make a fur coat for you if you kill them all! You monster!

That’s it for our Ring of Pain enemy guide. There’s a lot to keep track of, but it’ll become second nature after a while. It’s mostly a fear response, but, hey. Whatever works. A lot of these enemies are going to kill you. Repeatedly. It won’t always be your fault, so don’t feel too bad. You’re going to anyway, but at least try not to throw your mouse. How on Earth would you keep bashing your face into the brick wall that is this game without it?