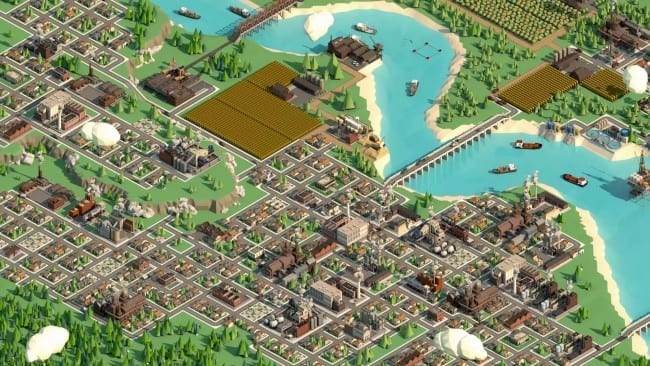 I write about video games every day, but, truth be told, I often do that while cooking french fries. Yes, I’m a small business owner as well, so Rise of Industry should be right up my alley… or so I thought.

Note: While I was doing my Rise of Industry review, I actually took a look at some guide videos on YouTube. A series from YouTuber Jasiek Krezel was extremely helpful:

Why did I check out YouTube even though I’m used to going in blind when reviewing games? Well, that’s due to Rise of Industry‘s barebones and limited tutorial, which hardly gets down to the details.

In one particular run, I had a production chain that was moving along nicely. Meanwhile, a few tiles away, another production chain led to numerous pop-ups telling me that the buildings weren’t connected to the warehouse. I thought to myself how strange that was. I zoomed in, even, and confirmed for myself that everything was properly connected by roads. But it turns out the “outgoing” road for the warehouse, which had the “outgoing” arrow signs, also had to loop back to the production chains and not just back to the city. Sounds odd, but you can check out the screenshot below.

This was just a minor quibble, but it did set the tone for what I could expect. I also had a hard time finding resources such as copper or gas. The nodes were hard to spot on the map, and it was an exercise in squinting to find what I needed. 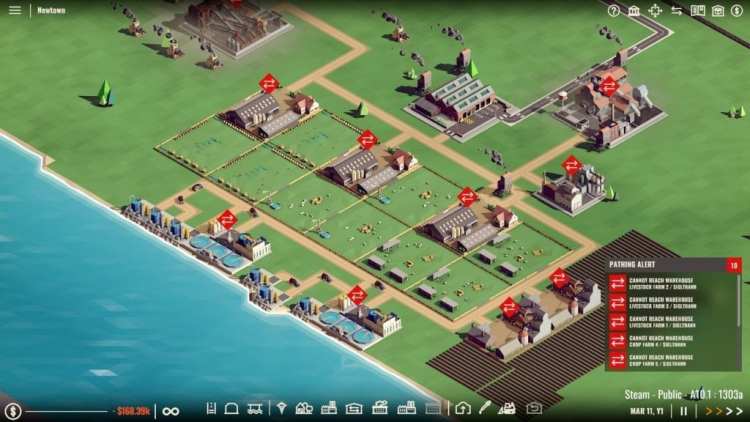 “You’re telling me those arrows don’t mean vehicles just drive out that way?”

But I digress. So what exactly is Rise of Industry? It’s a city-building/management game by Dapper Penguin Studios. Even though I’ve played titles such as Anno 1800, Tropico, and Cities: Skylines, Rise of Industry surprised me because of how much it focused solely on the supply chain and logistics aspect. And although the game is not a visual masterpiece by any means, the art design itself is decent.

You can choose from the campaign or sandbox mode — the main difference being that the former requires you to progress through the tech tree and the latter does not, leaving you free to build whatever you want. You have a number of settings to tweak prior to beginning a playthrough, such as your starting capital, product demand, resource limitations, maintenance fees, and even traffic.

That part I mentioned above regarding roads and warehouses is crucial since a majority of your farms, factories, and resource gatherers need to be connected via roads. These roads lead to your warehouse, where you can assign goods to be sold or transported to other locations.

You can craft a variety of products, like apples and oranges, milk and vegetables, soup, furniture, winter clothing, cars, potato chips, and more. Only a select few, however, will be in-demand at nearby towns at any given time. This means it’s pointless to build your IKEA stuff if people want summer outfits or olive oil. 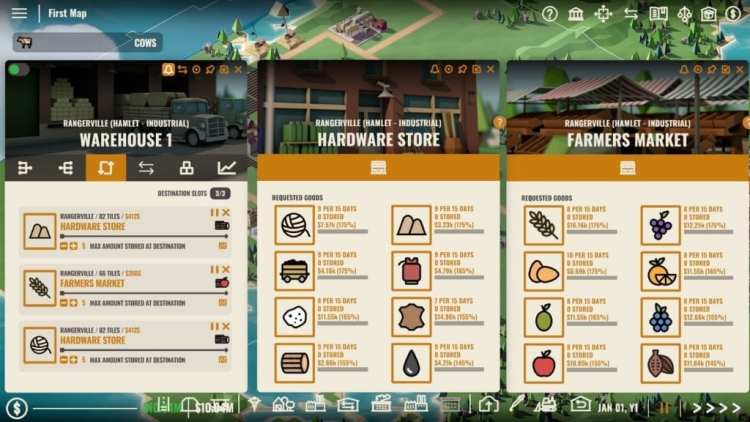 The game is paused when you start. Try to build the right production chains for certain in-demand goods first.

When you check your main town, you’ll see three different stores: the furniture shop, the farmer’s market, and a third store which requests higher-tier goods. Focusing on a specific production chain to manufacture and sell these goods is the key to turning in a profit.

For instance, a town may want some wool and mutton, which come from sheep. A livestock farm specializing in sheep only requires water (from wells) and wheat (from crop farms). These are just the basics. Let’s say the town’s third shop wants canned mutton. Well, that’s a bit more complicated, as that’d require both mutton and cans. This is how you make cans in Rise of Industry:

That’s what we take for granted when we buy our groceries! 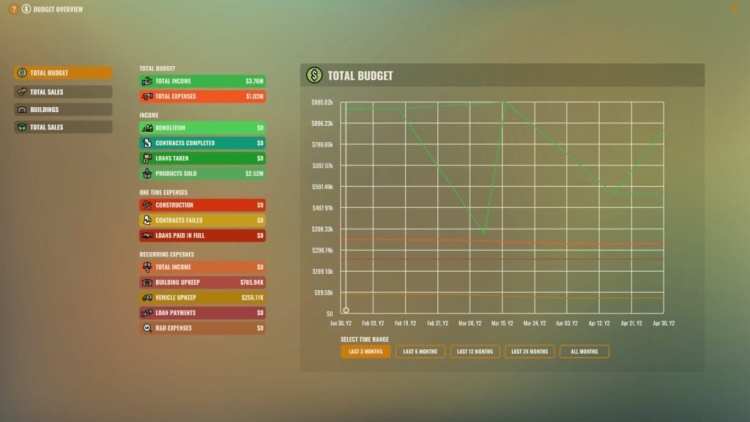 The budget menu gives you an in-depth breakdown of your income and expenses, as well as how much you’ve earned for your goods.

I must admit that Rise of Industry has so much depth that you can get lost in just looking at your production chains and seeing the finished product. Thankfully, the game also has a recipe book that you can check. Rise of Industry‘s options even allow you to enlarge the UI to suit your needs, which was immensely helpful.

The downside is that the UI itself can be unintuitive at times. For instance, pressing the escape key closes all panels, which means you need to click on the town or the warehouse again to remember what exactly you’d need to build. It also leads to having to compute the resources you’ll gain versus the ones you’ll need for manufacturing, and the game itself does not have that built-in feature. I found myself using my phone’s calculator just for that.

One more factor that might turn off the regular city-building/management sim fan is that there really isn’t much to do in the game. Yes, you have lots of products to craft and sell. Yes, you can see towns prosper, analyze budget reports, or do the occasional delivery quest, but that’s it. There’s no proper story or era progression to follow.

I found myself, more often than not, just constructing dozens of buildings and staring at the screen for hours as I waited for processes to finish. I criticized Anno 1800 for having a very shallow and vague trading system, but seeing Rise of Industry put too much focus on that without having anything else was also disappointing. 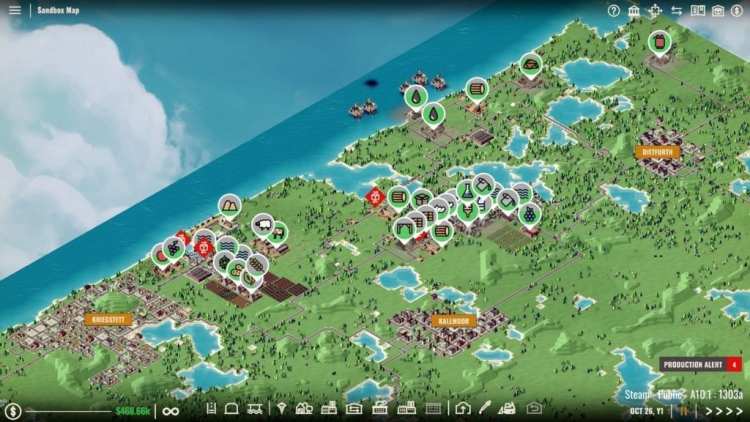 Sandbox mode was more enjoyable since you could go all-out with the various buildings and manufactory types.

So, is Rise of Industry something which I would consider fun? Well, it’s a relaxing way to pass the time, sure, but it can also lead to hours of mundanity. The good thing is you can tweak the settings to make the game as easy or as difficult as you want it to be. With modding support for scenarios, you can bet that dedicated players could create awesome content down the road.

As it stands now, Rise of Industry is something that makes me wonder why I’m cooking food in the virtual world for a virtual business. I can feel that same humdrum in real life.

Rise of Industry has significant depth with heavy focus on logistics and supply management. Unfortunately, there's not much else for you to enjoy.

By Martynas Klimas15 hours ago
Features