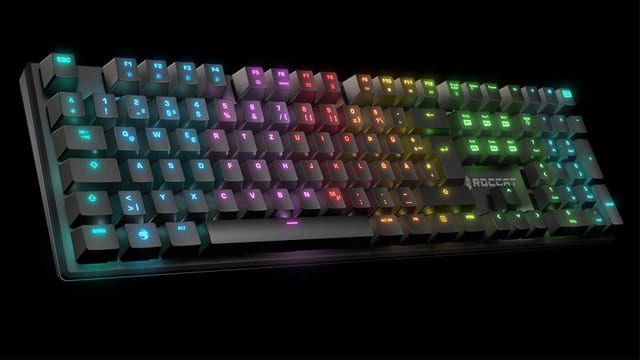 While I was busy testing the Roccat Kone Aimo mouse I thought it might be a good idea to also take the Roccat Suora FX mechanical keyboard for a spin and review its performance. This also gave me the opportunity to see how the Roccat Swarm app that’s used to configure Roccat hardware would handle two devices at once. There were some interesting results.

Mechanical keyboards are all the rage, they are generally tougher and more responsive than your standard keyboard. They are also the preferred choice of top gamers which is why Roccat created the Suora FX. Like nearly all mechanical keyboards, this is a really solid piece of kit and comes with the obligatory frameless design. Here are the specs:

Gamers looking for a decent amount of functionality won’t be disappointed, because like the Aimo mouse, the Suora utilises the Swarm app to configure the keyboard. The app allows users to set up to six macros which are selectable on the keyboard with the Function key. It’s a matter of creating a profile for the key or using one of the pre-configured macros that come with the keyboard. Another feature which some may find useful is the ability to add a sound to keypresses. Great for annoying other people in the room. 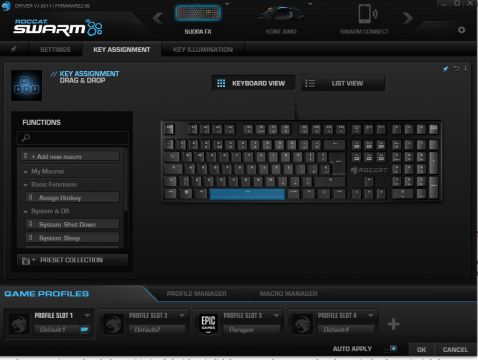 Along with being able to add macros, once again Roccat has gone to town with the RGB lighting and multiple profiles can be created for individual games. Users can either create their own by depressing keys and selecting what colours to assign to each key or use some of the predefines key setups and colours. Gamers who want a light show will find everything they need to make the keyboard shine. 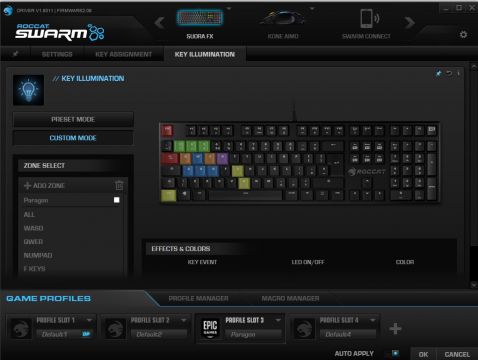 When creating a profile, a game executable can also be assigned to it. In theory what should happen is the keyboard profile will launch when the game is launched. I say in theory because it can be a bit hit and miss. What I discovered was that this would only work if the Game Mode button had been activated on the keyboard before the game was launched. I also discovered that sometimes it would not kick in even with the button activated. It took some messing around to get it working, and even then it wasn’t perfect with every game launch. Frustratingly this has to be an issue with the Swarm app itself and is likely nothing to do with the keyboard.

To get the most out of the Suora you need to persevere with the Swarm app which can be tetchy. The keyboard also comes with minimal instructions and the Game Mode button press problem I only discovered by trial and error. It’s strange because I experienced no such problems with the Aimo mouse in the Swarm app. I had to reset back to defaults a couple of times and restart the config which is not something I have to do with the mouse.

So is it great for gaming? I have to say it’s really good. The keys feel excellent and are super responsive. Moving from a standard keyboard to the Suora for Paragon felt very odd, the movement felt great and it’s hard to explain in words the difference between the two. Not being a pro gamer and not pressing buttons at lightning speed it’s hard to know just how much better this keyboard could make you, but the fact that even I noticed says something.

The keyboard is fairly comfortable to use as it’s compact, and although frameless designs take some getting used to, the key positioning feels right. It’s slightly narrower than I am used to when typing but for gaming, it feels spot-on. 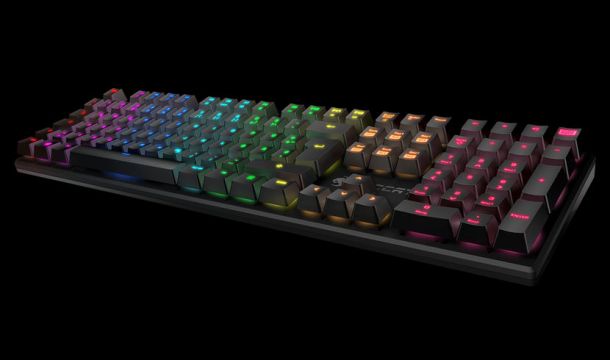 The Suora FX is not a cheap keyboard (around £100) but when coupled with an Aimo mouse it’s great for gaming. It feels solid and responds well. The only real drawback is how it’s configured with the Swarm app which sometimes works when loading profiles and sometimes doesn’t.

Despite its configuration quirks, when you get the Roccat Suora FX setup right, and the Swarm app is playing ball, it’s a great keyboard.