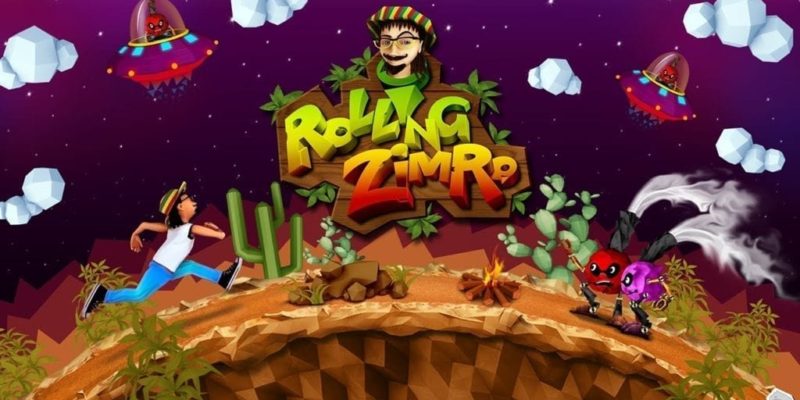 Xaxist Arts has released Rolling Zimro 1.1, their brand new game for the iPhone, iPad and iPod touch. It’s a super fast action game with first of its kind spinning worlds. The game has beautiful low-poly art style and has intuitive controls specifically designed for the touch devices. Rolling Zimro has also been shortlisted for the Indie Prize Showcase which is to be held at Casual Connect Asia, Singapore this May.

Game Story: Planet Smoraah is dying. The smongs on the planet are left with some sacred wisdom leaves, but not enough. Earthling Zimro is the only one who knows how to grow these scared plants. King Smong has ordered to capture Zimro and the smongs have invaded planet earth.

You take control of Zimro, a young boy from the countryside. You can get him to run, jump, slide and even fly through each game. Tapping the left part of screen makes Zimro jump and tapping right part of the screen makes him slide. Holding the screen for longer makes him jump higher or slide longer.

The goal is to stay alive as long as you can while dodging the deadly obstacles and hitting the furious smongs along the run. You start with three lives for each round, and if you run into an enemy or obstacle, you lose a life. If you lose all of your lives the “endless runner” game ends.

While the game is in fast spinning action, you encounter some reallycool power-ups which when collected gives Zimro ability to fly, ride a bicycle, become a superhero and slowdown the game and collect munchies with a magnet. Power-up names are quite creative.

During each run, you have to collect as many munchies as possible. The game also features a shop section called as ‘The Stash’ where the player can trade the collected munchies to buy extremely useful power-ups and utilities to score more. A good strategy is required while buying the power-ups to get a high score.

Every time when the game starts, player gets a new game with a different world to play. In all, there are three beautiful low poly worlds. The arrangement of obstacles and enemies is procedurally generated and the game becomes more difficult as it progresses. The speed of the game and the spinning worlds makes the game very trippy.

Game features In App Purchases using which player can buy munchies in bulk. After every game play, player can share his score to popular social networks to get some free munchies. More free munchies can be grabbed by following the social accounts of the Xaxist Arts.

You can also compete with your friends online using the Game Center Leaderboard and unlock about 36 crazy achievements. The soundtrack is quite energetic and complements the fast action in the game.

Pricing and Availability: Rolling Zimro 1.1, the unique fast action spinning endless runner game, is $1.99 USD (or equivalent amount in other currencies) and available worldwide exclusively through the App Store in Games category.