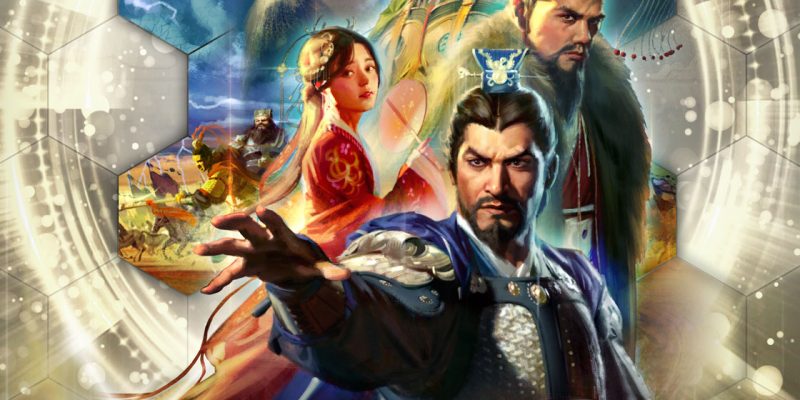 Romance of the Three Kingdoms XIV: Diplomacy and Strategy Expansion Pack sounds like quite a mouthful, doesn’t it? The first major content drop for the game boasts trading with Eurasian nations, geographic advantages, outlander tribes, and the War Chronicles Mode.

We know that past DLCs mostly added extra scenarios or officers. As such, this new expansion already provides features and mechanics that are truly unique. Likewise, though it’s been out since December, the English version had only been made available recently. But, the question still remains: is it worth it?

Recounting my experiences with the base game

My experience with Koei Tecmo’s historical simulation franchise has been very extensive. Starting from the SNES days, I’ve been conquering China as Cao Cao, Liu Bei, Sun Quan, Lu Bu, and other heroes of the age. For the most part, I tend to favor the macro-type/single ruler-controlled gameplay in these titles more than the RPG-esque variants. As such, Romance of the Three Kingdoms XIV (which did have that kind of gameplay) surprised me when I reviewed it last year (and not in a good way, mind you).

Indeed, it was one of the most disappointing titles I’ve played in the series. Numerous flaws related to the core gameplay — from automation and territorial expansion to the limited means of using tactics manually (i.e., adjutant system) — made for boring, repetitive, and tedious runs. It was one of the few times where I gave up after clearing only a couple of scenarios when, in the past, I’d happily spend countless hours finishing multiple campaigns.

Fast forward to the present, and I was keen on seeing if Romance of the Three Kingdoms XIV: Diplomacy and Strategy Expansion Pack managed to improve on some of these facets. In a way, some nifty features were fine enough on paper. Sadly, everything fell flat owing to the base game’s most egregious flaws. 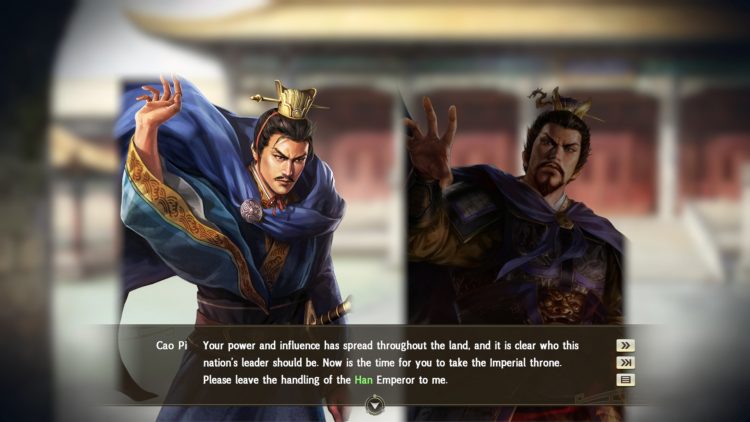 First, let’s talk about geographic advantages. This feature in the Diplomacy and Strategy Expansion Pack gives bonuses and perks whenever you control a province. For instance, Northern Jing Province has four cities (Xinye, Jiangxia, Xiangyang, and Jiangling). If you control at least three of these, you’ll gain the “Academic” perk that boosts doctrine and officer EXP.

Different provinces have their own perks such as “Rhetorician” (increases the chance of recruiting prisoners and free officers) and “Spy” (halves the costs of plots). Moreover, certain locations let you establish contact with outlander tribes and Eurasian nations. 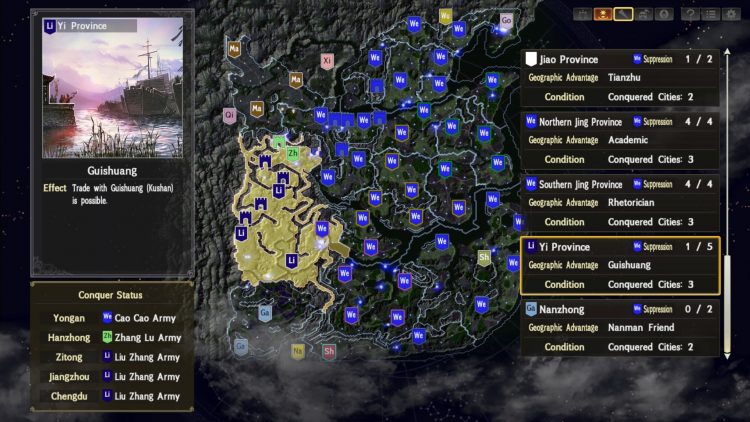 In the case of the outlander tribes, there are five: the Wuhuan, Xianbei, Qiang, Shanyue, and Nanman. The tribal cities appear on the map and their fortresses are defended by 300,000 troops. It’s going to be a tall order if you attempt to subjugate them, so you’re better off making friends.

Once contact has been established, you can send gold, supplies, or items (much like what you’d do for other factions). By increasing your diplomatic relations with the tribes, you’ll gain their trust and even their officers will join your ranks. 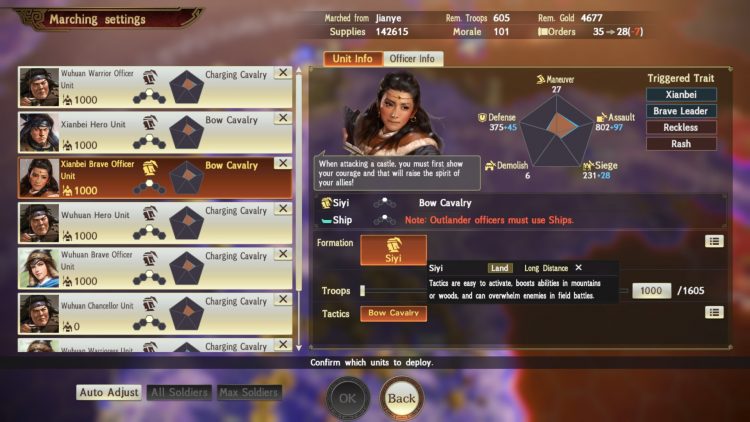 Now, if you do control certain territories, you may enact trade missions to four Eurasian nations. These are Tianzhu (India), Guishang (Kushan Empire), Anxi (Parthia), and Daqin (Roman Empire). A slightly similar mechanic applies when you send an envoy packed with items. Your chosen emissaries spend a dozen turns or so traveling from China to faraway lands before returning to your domains.

In some cases, they could find treasures along the way. You’ll earn rewards such as tons of gold, special items, or even new battle tactics. Conversely, they could get robbed, too. You’ll be repeating the process of waiting for several turns (same with the outlander tribes) until you max out your diplomatic relations. 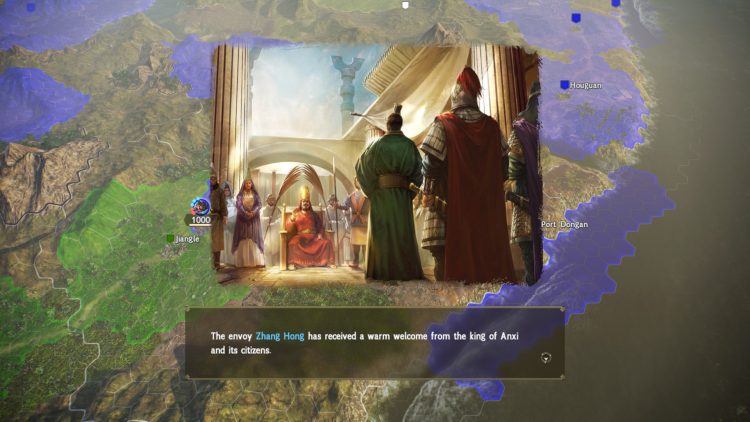 That brings us to where these features and mechanics come crashing down. Truth be told, one can pinpoint that Romance of the Three Kingdoms XIV‘s shortcomings are primarily with its core gameplay systems. The preparation phase leads to a battle phase that’s mostly automated. When you combine that with additional facets that can be summarized as “make the same trades” and “wait some more,” you’ll end up with a run where you’re just going through the motions.

I can’t stress enough how long it took me to max out Cao Cao’s/Wei’s friendship with Anxi and Daqin. All the while, my overall experience was peppered with the same old problems — I was “relay-dancing with my armies” and “city-hopping with my ruler” just to make expansion more manageable. 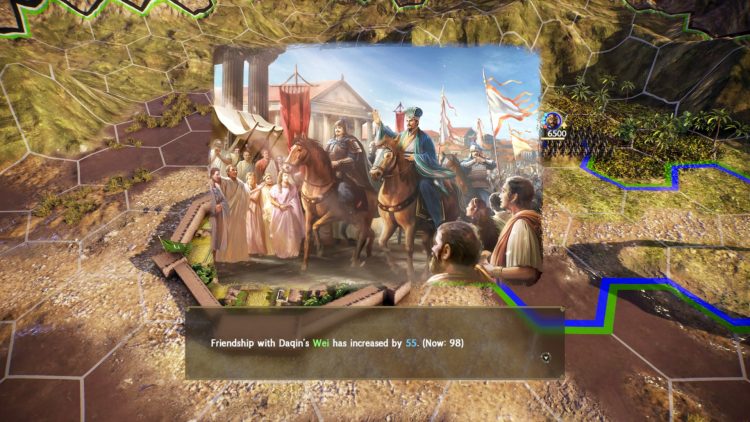 My qualms and concerns didn’t stop there. I realized that the AI of the tribes was mostly passive. With a surplus of gold and items, each tribe’s 300,000 troops stayed within their borders. They barely bothered me, and they were mostly a non-factor.

Remember, this offering is called Romance of the Three Kingdoms XIV: Diplomacy and Strategy Expansion Pack. But, the diplomacy side of things still feels barebones. I didn’t notice major changes as to how you’d deal with other leaders and factions. As for the strategy side, I didn’t need to make use of the “False Information” and “Destroy Building” actions in battle. My main concerns were still there: “relay-dancing,” micromanaging placements, ensuring that armies reached the target in order, triggering tactics, and looking at my woefully inept AI viceroys. As such, I wasn’t too keen on trying out certain commands. 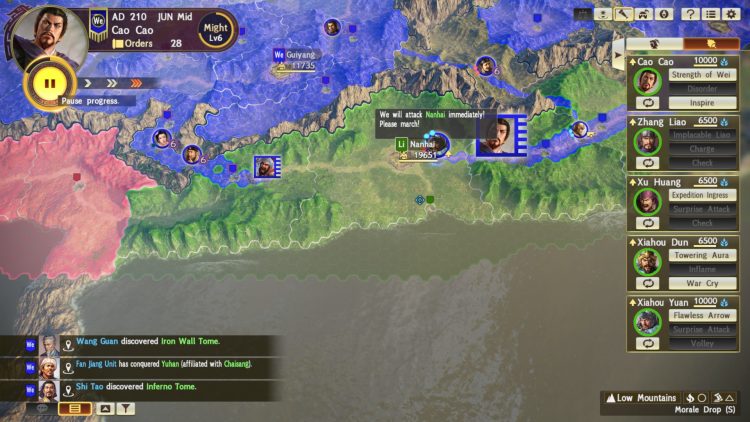 What else is in store?

Romance of the Three Kingdoms XIV: Diplomacy and Strategy Expansion Pack also adds several officer characteristics, a Chronology page that shows you past incidents, a few events, and a couple of scenarios such as the Battle of Chibi.

A new feature that might entertain you is the War Chronicles Mode. Think of these as mini-scenarios where you only have a small pool of leaders to choose from. You’ve got specific victory objectives and failure conditions. Likewise, the maps are smaller, turns are limited, rosters are assigned by default, and foreign relations are disabled. A completion nets you a unique officer and a score.

Don’t get me wrong. The expansion itself has a lot in store for those who truly enjoy what Romance of the Three Kingdoms XIV provides. However, if you’re someone who found the base game or core systems rather disappointing, then I doubt that the Diplomacy and Strategy Expansion Pack would change your mind. 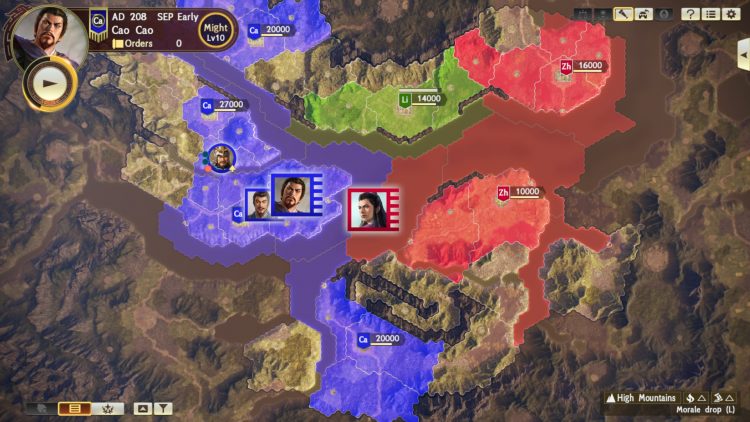 By A.K Rahming21 hours ago
Previews