Ronin is a tale of vengeance, deft ninja skills, and knocking people to their deaths through irresponsibly-placed glass windows. The latter is not, strictly speaking, straight out of the ninja skills handbook, but it’s immensely satisfying nonetheless.

It was satisfying in Gunpoint too, which is a game Ronin has inevitably been compared to. That’s fairly reasonable, since creator Tomasz Waclawek himself called an early version of the game a “Gunpoint ripoff” (a title Gunpoint’s Tom Francis felt was too harsh.)

The arc-ing jump and side-on building infiltration mechanics are certainly similar, but Ronin has more going on than simple derivation. 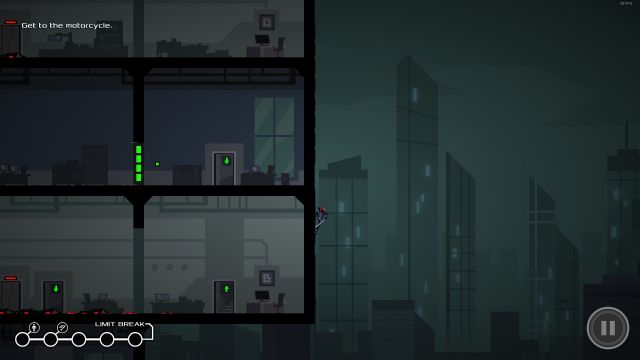 Sliding down the side of a building just looks cool by default.

Chief among those differences is the central combat system (Ronin has its stealthy moments, but you’re mostly trying to obliterate a small group of guards as efficiently as possible,) which have resulted in the game being dubbed a ‘turn-based action platformer’ by a marketing team who obviously found the mechanics as difficult to describe in words as I’m about to. If any of the following sounds confusing, bear in mind that it’s a whole lot simpler when you’re just playing it.

Ronin’s motorcycle-helmeted protagonist makes her way around in real-time, except when split-second action type decisions need to be made. At which point the game because sort of turn-based instead. When you’re seen by a room full of guards, the action will pause and the lines of their bullet trajectories traced on the screen. Ronin’s nameless (… I think) heroine can basically perform one action before those guards shoot. That might be doing another Gunpoint-esque jump to get yourself out of harm’s way, or to knock over an opponent (thereby removing his gunshot as a threat.) Or it can be one of the combo-linked unlockable skills, such as lobbing your sword at someone, tossing out some stunning Shuriken, or dropping a temporary decoy.

Lengthier actions (like longer jumps) get queued up, denoted by the end of your white jump arc turning red to show that’ll happen ‘next’ turn. 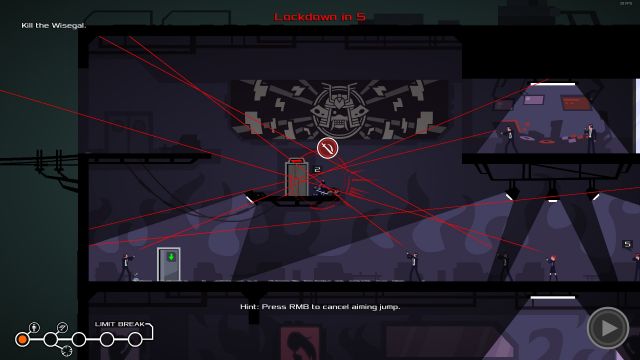 This is … not a great situation to be in.

Effectively, each decision is one of positioning, planning ahead, and (in later stages) building up the combo meter so you can unleash some special abilities. Just to toss a little extra tactical planning into the mix, if the combo-meter builds to five and hits the limit-break, you get a freebie turn during which you can effectively take two actions before any guards can react (killing somebody who’s ostensibly covered by another’s gun, for example.) You get one combo ‘pip’ for knocking an enemy down, two for killing them, and the meter falls by one point each ‘turn’ where nothing substantial is achieved; so this quickly begins to factor into your decision making.

The game isn’t great at actually explaining the combo rules, but they become fairly self-evident.

To begin with, you just have to deal with regular goons with pistol-type weapons. As you progress through Ronin’s fifteen levels, it starts to introduce guards with automatic weapons (which will fire a continuous line of bullets for a couple of ‘turns’ that you can’t jump through) and weird samurai-ninja hybrids. These guys take two sequential hits to kill and make straight-line beelines for you with swords drawn. Helpfully though, they don’t seem too co-ordinated when it comes to ending their attack outside a building and falling to their deaths.

Each of the five chapters features two levels of intel hacking, followed by a third mission ending with a boss show-down.

If you cause some havoc and then disappear guards will initiate an alarm call, eventually locking down the building (impeding your progress) and costing you the vital skill point for completing a level without raising any alarms. Basic foes can be distracted from calling in an alarm by just showing up again in their line of sight, but latter stages have guards whose sole purpose is to initiate the nine second alarm countdown. These guys are so dedicated to their task that they’ll keep the countdown going right until the moment you hit them in the face with a sword.

Spooked civilians can also raise an alarm, and can be a major pain in the hole. Skills points are only doled out if a level is complete with (a) no alarms, (b) all enemies dead, and (c) no dead civilians. If they start raising an alarm, you have to kill them. But killing them denies you the skill point too. The only option, then, is to stealth around them.

These sections can be a bit on the annoying side, because they’re a shift into puzzle-based territory, as opposed to the more organic combat sequences. In most cases there’s one way to do the stealth bit ‘right’; whereas with the fighting there’s a lot of room to improvise and reverse your screw-ups. Screw up the stealth, and it’s either back to re-loading the checkpoint or sacrificing the skill point on that particular level. To unlock every skill, you need every single skill point.

This sort of freeform, just-fucking-with-the-guards stealth, meanwhile, is delightful fun.

Re-loading a checkpoint doesn’t exactly take a long time (just a few seconds,) but each time you do it you may be wishing Ronin borrowed more from Hotline Miami than a mysterious motorcycle helmeted character and a moody electro soundtrack. Some kind of ‘R for rapid restart’ function would’ve suited this title pretty well. Especially for the occasional moment where a bug accidentally teleports Ms. Helmet through a wall to her untimely death.

Though it’s possible to play with either mouse and keys or a gamepad, the latter doesn’t quite have the thumbstick precision necessary for planning and placing the arcs of your jumps. It can work, but it’s a whole lot more finicky than just using the mouse. Frame-rate watchers will probably wish to know that Ronin is capped at 30fps; this doesn’t make a substantial difference to how the game plays but is, you know, a bit odd. You can read the creator’s explanation for the 30fps lock in this Steam community thread.

While some of the periphery, like imperfect stealth sections and occasionally tricksier-than-it-need-be jump aiming, is not ideal, Ronin’s central turn-based combat mechanic is a clever enough way to while away five or six hours. More, if you dip into the New Game Plus mode. At a glance it can be mistaken for a Gunpoint clone, but underneath that initial inspiration is a tactical room-clearing title of an entirely different, and entirely worthy, kind.

YIIK: A Postmodern RPG to Keep Your Eyes On